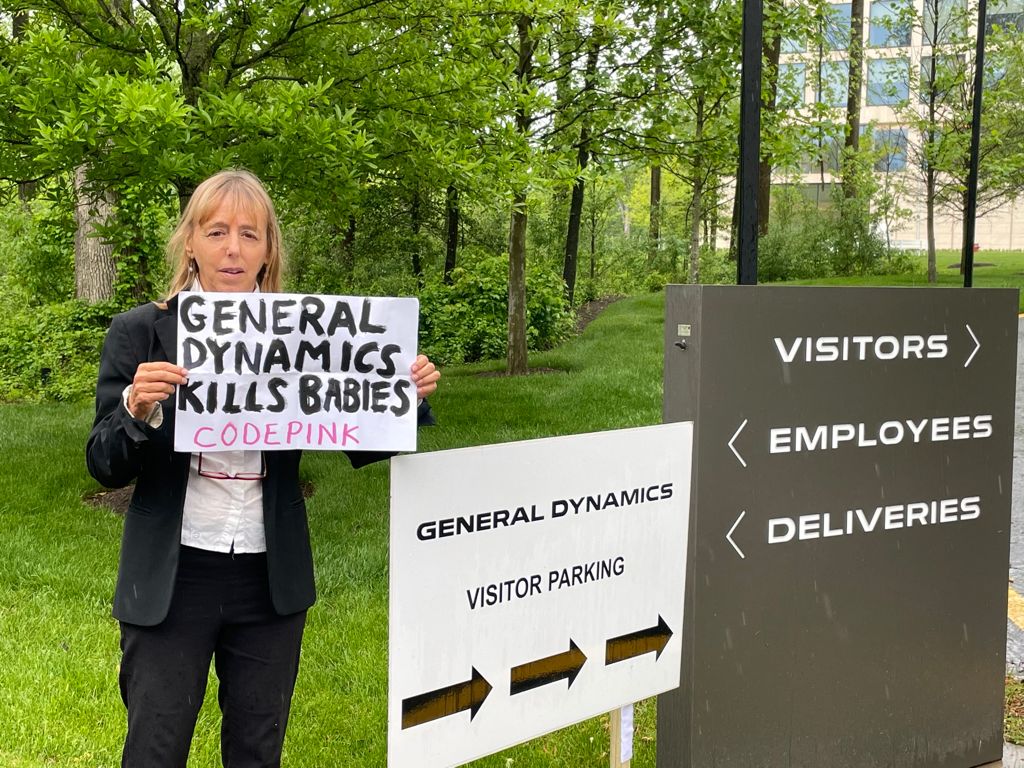 (Washington DC) On May 5, 2021 — General Dynamics (GD) held its annual general meeting in Reston, Virginia. CODEPINK cofounder Medea Benjamin confronted the CEO and the board with questions about the company’s weapon sales to Saudi Arabia and other repressive regimes, such as the UAE, Bahrain and Egypt. While video recording was not allowed at the meeting, an audio of the discussion is available here.

“I asked CEO Phebe Novakovic how she feels about personally making $21 million a year through a business model that thrives on conflict, death and destruction,” said Benjamin. “I mentioned a 2000-pound General Dynamics bomb that hit a Yemeni marketplace, killing 97 civilians—including 25 children. I asked what is the moral justification for flooding the Middle East with more weapons when the region is desperate to end the conflicts that General Dynamics profits from.”

Benjamin brought up the unethical revolving door between the company and the government and pointed to General James Mattis as the perfect example. Mattis, who was at the meeting, was on the board before becoming Trump’s Secretary of Defense, and at the May 5 shareholder meeting he was voted back on the board.

Benjamin also brought up the company’s involvement in Trump’s detention of children at the U.S.-Mexico border, accusing the company of profiting from children locked in cages. CEO Novakovic said that was not true and suggested a meeting between herself and Benjamin to clarify the company’s positions and actions on this and other issues. Benjamin has followed up with a meeting request.

General Dynamics is one of the world’s largest arms manufacturers, with a long-lasting contract with Saudi Arabia estimated at $1.3 billion dollars-providing weapons to a country waging war on Yemen that has already killed an estimated thousands of innocent civilians. The company’s arms sales to despotic regimes in the Middle East only contribute to the ongoing conflict and humanitarian crisis in the region, which creates strong resentment towards our country and contributes to the rise of violent extremism.