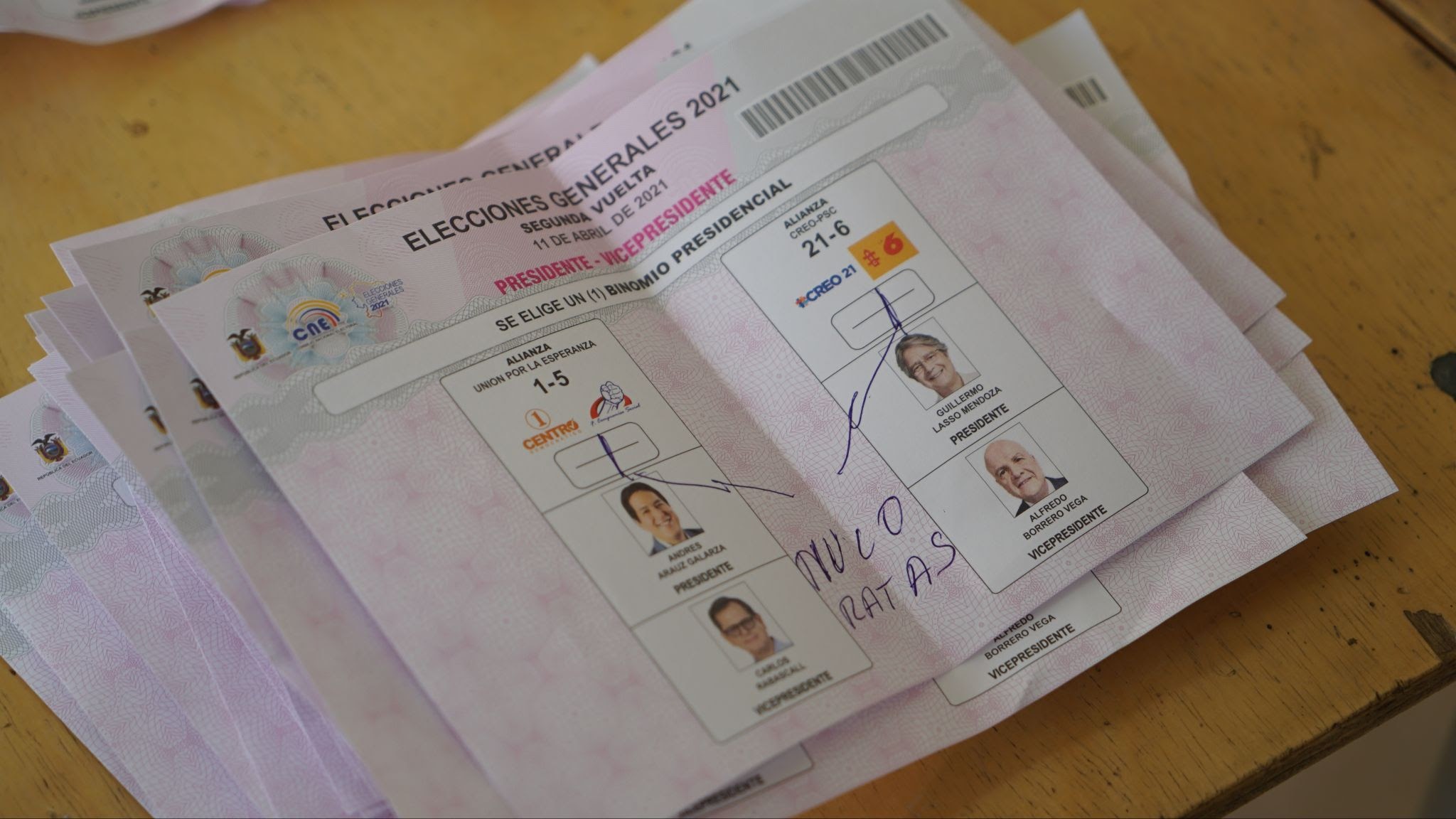 A spoiled ballot in Ecuador’s elections. Photo by @AlinaDuarte_

Ecuador’s April 11 election that led to a 5-point victory by conservative banker Guillermo Lasso over progressive candidate Andrés Arauz was not what it appeared to be. On the surface, it was a surprisingly clean and professional election, as our CODEPINK official observer delegation witnessed. But a fraud-free process for casting and counting ballots does not mean that the election was free and fair. Behind the scenes was a monumentally unequal playing field and dirty campaign designed to quash an Arauz win.

For starters, Arauz—a 36-year-old follower of the political leanings of former president Rafael Correa and his Citizens Revolution—barely even got on the ballot. The political party he tried to run under was banned by the National Electoral Council (CNE). He and his supporters formed a new political party and that, too, was banned. Eventually they found a small party that let them borrow their slot, but by then it was late December and the first round of elections was on February 7. The other campaigns had a four or five month head start.

Arauz, who was virtually unknown, wanted to have Rafael Correa as his vice president, but the CNE banned Correa from being on the ticket. Even more astounding, the electoral authorities actually prohibited the Arauz campaign from even using Correa’s voice or image. But in a show of blatant bias, they didn't banish Correa’s image from being used in a negative way by his opponents.

Another intense obstacle was the role of the media. The corporate media dominate all the airwaves in Ecuador, and they were clearly in the Lasso camp. The media led a dirty campaign spreading fake news about Arauz, Correa and their supporters. They scared people by claiming that Arauz was going to de-dollarize the economy. Ecuador has been using the dollar as its currency since 2000, after a financial crisis saw the collapse of its former currency, the sucre. An economist, Arauz was well aware that dollarization had stabilized Ecuador’s economy and he never even suggested going back to the sucre.

A particularly absurd accusation came from Colombia, where the country’s right-wing attorney general claimed that the National Liberation Army, an armed insurgent group that has been operating in Colombia for decades, made an $80,000 loan to Arauz’s campaign. Based on a doctored video that was proven to be false, this accusation nevertheless continued to circulate throughout the press to sully Arauz’s character.

A concerted smear campaign also attacked the legacy of Rafael Correa to scare people away from voting for Arauz. During his time in power from 2007 to 2017, Correa brought economic and political stability to a country that had had seven presidents in ten years. Correa, who has a Ph.D. in economics, completely transformed Ecuador into a modern democracy with a vibrant middle class. He also brought tremendous gains to the poor, reducing poverty from 37 percent to 22 percent, and built critical infrastructure, including highways, hospitals and schools. But the portrayal in the media made Correa out to be a corrupt authoritarian who was a threat to democracy, creating a dilemma for the Arauz campaign about how much to align itself with Correa’s legacy.

The media smear campaign went hand-in-hand with attacks on the left that had been going on for the past four years under the presidency of Lenin Moreno. Ironically, Moreno had been Rafael Correa’s vice president and ran on the ticket of Correa’s Citizens Revolution. But once in power, he orchestrated a kind of “silent coup,” betraying Correa, the Citizens Revolution and the progressive policies they stood for. Making common cause with the elites, including Guillermo Lasso, he imposed austerity policies and signed a terrible deal with the IMF that focused on budget cuts, deregulation and reducing workers’ rights. In October 2019, there was an uprising against the elimination of a fuel subsidy that would have raised prices on everything from transportation to food. It was put down violently by Moreno’s government and many of the protest leaders remain in prison today.

Lasso supported Moreno’s austerity measures, the deal with the IMF and the violent crackdown on protesters, yet his campaign successfully managed to create distance between him and Moreno. The narrative spun in the media was that Arauz would continue in the footsteps of Moreno and Correa, as if Moreno had not betrayed the movement.

Moreno viciously lashed out at the left through the misuse of the legal system for political purposes, a tactic known as lawfare. Jorge Glas, Moreno’s vice president who spoke out against his betrayal of the Citizens Movement, was accused of corruption, convicted and put in jail, where he remains under dire conditions. Moreno’s government attacked Correa himself, who went into exile in Belgium to avoid being thrown into prison. There are about 30 charges pending against Correa, including a farcical accusation that he had psychic influence over people that led them to become corrupt.

Other top party leaders were hounded and are now either jailed, under house arrest, or forced into exile. The decapitation of the Citizens Revolution meant that Arauz’s campaign was significantly weaker than it would have been with their help.

Given all the strikes against Arauz, it is remarkable he did so well. Had it not been for lawfare, a biased CNE and a dirty campaign, he would have won. However, another major factor was the rift between the Citizens Revolution and the indigenous movement that happened under Correa’s tenure, which led to calls for a “null vote.”

The Confederation of Indigenous Nationalities of Ecuador (CONAIE) and its political party Pachikutik were represented in the first round of voting by Yaku Pérez, who did well but didn’t make the final cut. Feeling that neither of the two presidential candidates represented the indigenous community,  Pérez called for people to spoil their ballot by “voting null” (voting is mandatory in Ecuador so a spoiled ballot is the equivalent of boycotting the election).

There was some dissent from the “vote null” position—just days before the election, CONAIE President Jorge Vargas came out in favor of Arauz—but a significant percentage of indigenous peoples voted blank. Roughly 1.7 million Ecuadorians decided to either vote blank or to spoil their ballot. That was a critical factor in the election, given that Lasso won by only about 420,000 votes. Accused of enabling a right-wing victory, some members of Pachakutik argued that they voted null because they believe they can bring down the Lasso government through popular uprisings similar to what occurred in October 2019.

A victory by Arauz would have helped people struggling during this pandemic—Moreno so mismanaged the health situation that Ecuador has one of the world’s worst COVID death rates and the economy has been devastated.

Arauz would have also strengthened the left throughout Latin America, promoting the kind of regional integration that took place during the so-called Pink Tide in the early 2000s when a succession of progressive governments took power in Latin America and the Caribbean. New institutions were created such as UNASUR, the Union of South American Nations, and CELAC, the Community of Latin American and Caribbean States. These became a counterbalance to the Organization of American States, which is used as a tool of the U.S. State Department to promote U.S. foreign policy throughout the region. These new regional organizations were part of a much broader vision of regional integration along the lines of the European Union.

If those organizations were as strong now as they had been several years ago, it’s likely that Latin America would have been in a better position to deal with the pandemic because they could have bought vaccines together and cooperated on public health policies.

In the coming years, Ecuador’s Citizens Revolution will have to use this time to regroup, repair frayed relations with indigenous and union groups, and build a strong social base of support. This social base is something they never really achieved, even under Correa’s mandate. They do, however, still have a majority in the National Assembly. The second biggest assembly bloc is the indigenous party Pachakutik, which will undoubtedly be courted by Lasso’s government but also has left tendencies. So there may be room to make alliances and fight back against Lasso’s austerity policies.

On the regional level, it’s a shame that Ecuador won’t be helping to swell the ranks of the Pink Tide. But hopefully, other nations in Latin America—such as Peru, Chile, Brazil and even Colombia—have a chance in the coming years to keep the second wave of the Pink Tide afloat.

Medea Benjamin is co-founder of the peace group CODEPINK and an author of books on the Middle East and Latin America.