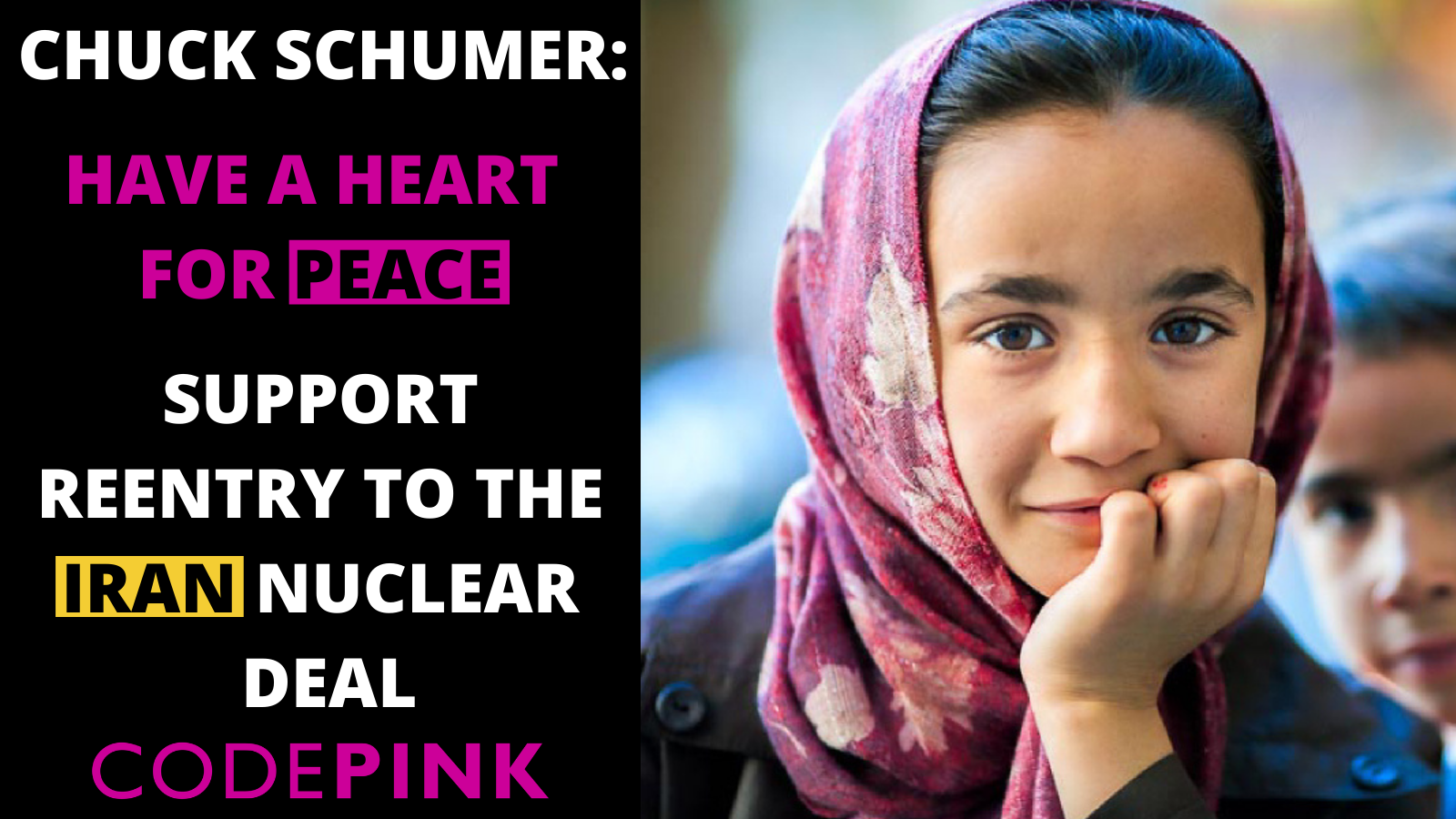 The anti-Iran forces are pulling out all the stops to prevent Joe Biden from re-engaging diplomatically with Iran after he takes office. Trump is using his last days in the White House to impose sanctions so severe that they are hindering Iran’s ability to cope with COVID; Israel has been carrying out illegal executions and setting off explosions inside Iran; and groups like AIPAC and the Foundation for the Defense of Democracy are lobbying as hard as it can to stop the U.S. from re-entering the Iran nuclear deal.

Even though President-elect Biden has been crystal clear that he intends to re-enter the nuclear deal, Chuck Schumer, the minority leader in the Senate, who shamefully voted against the deal in 2015 but then criticized Trump for withdrawing, has been crickets 🦗🦗🦗.

We need to shore up all the support we can to counter the pushback Biden will surely face and we are asking Sen. Schumer: Which side are you on? Send a message now to Senate Minority Leader Chuck Schumer telling him to publicly support Biden’s efforts at diplomacy with Iran and to bring his Democrat colleagues with him.

Even though Schumer voted against the Iran deal (the JCPOA) in 2015, but he has good reason to support it now:

As minority leader in the Senate (possibly majority leader after the Georgia runoff elections), Schumer should not only support the deal himself but use his influence to pressure his colleagues. Such encouragement from Schumer will likely be needed. Senators like Coons, Sinema, Manchin, and Cardin aren’t currently opposing Biden re-entering the deal, but they could easily be lobbied to flip in the wrong direction.

Write to Schumer and ask him to declare which side he is on. Ask him to speak out in favor of the U.S. re-entering the Iran Nuclear deal with no preconditions. Tell him to bring his Democrat colleagues with him.

Over the past few weeks, Iranians have been documenting on Twitter the cruel effects of U.S. sanctions, using the hashtag Ravayat-e Tahrim (روایت_تحریم#), meaning "the story of sanctions." One Iranian man tweeted about going to as many as eight pharmacies in search of his father’s diabetes medication, but without any luck. He then described an encounter with a woman unable to find the blood thinner medication Plavix that she desperately needed. "I forgot my own troubles and stared at her as she left the pharmacy hopeless," he wrote. "I felt ashamed that we had Plavix at home for my father who suffered a stroke."

Iranian President Hassan Rouhani has said over and over that if the U.S. returns to the deal, his country will go back into compliance as well. He has even said that asking for “compensation” for Iran’s suffering under Trump is a long process and therefore won’t be a precondition for Iran to return to the deal. Key leaders in the House, including even pro-Israel hawks such as Cong. Brad Sherman, who voted against the deal in 2015, are leading a letter in support of the U.S. re-entering the deal without preconditions. If Schumer comes out also supporting the deal without preconditions, it will send a strong message to his fellow Democrats in the Senate to join him. Can you take a moment now to send Schumer a message telling him to be on the right side of history?

Attempting to sabotage efforts to get the U.S. back into the deal, AIPAC is encouraging Biden to “use leverage achieved via sanctions.” But what leverage has been achieved? Trump’s campaign of maximum pressure has been a maximum failure, causing terrible suffering in Iran, resulting in Iranian enrichment of uranium increasing far beyond the levels of the deal, and Iranian politics moving to the right. Write to Schumer now and tell him to support peace and diplomacy. Tell him to use his position to support Biden bringing the U.S. back into the nuclear deal immediately without preconditions.

P.S.: Two great CODEPINK webinars today/tonight: at 2 PM EST, Carley Towne will talk with Stephen Semler from the Security Policy Reform Institute about how our representatives in Congress are funded by top weapons manufacturers, and at 7 PM EST Danaka Katovich will talk with Alia Ali about her installation “The Red Star” as part of our “Beyond the War” Yemen cultural series. RSVP for one or both events!