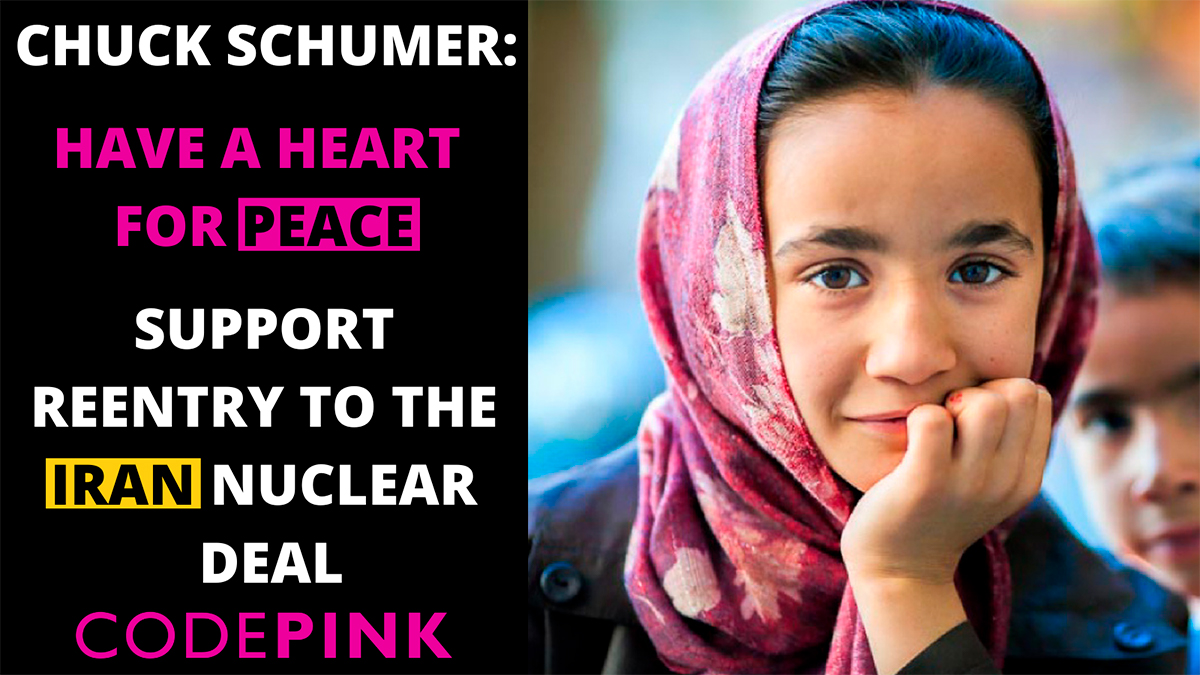 The pro-war faction is pulling out all the stops to prevent Joe Biden from re-engaging diplomatically with Iran, so we need to shore up all the support we can get in advance January 20th. We are asking Senate minority Leader Chuck Schumer of New York: which side are you on? Send a message to Schumer now telling him to get on the right side of history and use his position as Senate Leader to support Biden’s efforts at diplomacy with Iran.

I urge you to choose diplomacy with Iran and support the U.S. re-entering the Joint Comprehensive Plan of Action (JCPOA) once President-elect Joe Biden takes office.

You were one of only four Senate Democrats who voted against joining the Iran nuclear deal when President Obama first introduced it in 2015. But in 2018, you criticized President Trump’s decision to withdraw the U.S. from the deal. Now, as President-elect Biden prepares to take office, the JCPOA has become a hot topic once again. Which side are you on? Can I count on you to support it and bring your Democratic colleagues  — especially Cardin, Manchin, Menendez, Coons, and Sinema — along to this vital commitment in 2021?

Since Trump pulled out of the deal, the Iranian people have been suffering terribly under U.S. sanctions. Essential provisions like food, housing, and medicine have become price prohibitive and/or difficult to access thanks to the sanctions. Countless numbers of Iranians have died due to Iran not being able to import life-saving medicines and medical equipment, including to address the COVID crisis. On top of all of this, in January 2020, following the assassination of Iranian General Qasem Soleimani, the U.S. came dangerously close to war with Iran. Now is our chance to move forward with peace and diplomacy rather than aggression and war of the Trump era, and we need your help.

The election of Joe Biden gives us a perfect opportunity to make positive change. Biden has promised to pursue re-entry into the Iran nuclear deal, but he’ll need strong support from Congress to succeed. As minority leader in the Senate, you have tremendous power to influence your colleagues’ opinions. If you come out in strong support of the JCPOA, it will likely prevent anyone in your party from being swayed the wrong way.

Please publicly state your strong support for the JCPOA and encourage your colleagues in the Senate to join you.