President Biden just released his final Pentagon budget proposal for 2022 which reads like an enormous corporate grab bag for military contractors and includes:

❌At least $30 billion for new nuclear weapons slated to cost $1.7 trillion over the next decades

❌$17.4 billion for an unnecessary Space Force

❌Billions for the F-35 fighter jet, a boondoggle with an eventual $1-2 trillion price tag

Ultimately, the Federal Budget is up to Congress to decide, NOT the President. Which is why we’re so excited that Representatives Barbara Lee and Pramila Jayapal just introduced new legislation from the Poor People’s Campaign which calls for redirecting at least 10% of the military budget to meet human needs.

Call on Congress to redirect military spending to eradicate poverty by supporting legislation from the Poor People’s Campaign “Third Reconstruction: Fully Addressing Poverty and Low Wages from the Bottom Up!” 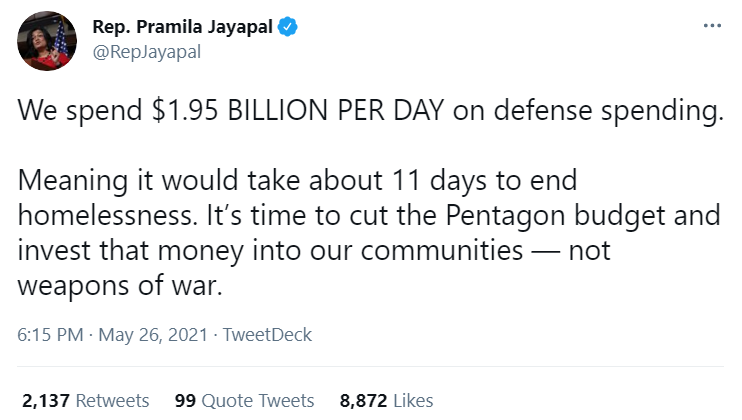 The Biden Administration is using China as the major justification for this massive increase in military spending by framing China as a danger to the U.S. and its allies. As former President Jimmy Carter stated, “While the United States has been at war for 20 years, China has instead invested in 21st century infrastructure and in its own people, lifting 800 million of them out of poverty.”

He's right: if we’re going to address the crisis of poverty and injustice in our country, we can’t continue to hurl money at the for-profit war industry that's gearing up for war with China. The Third Reconstruction: Fully Addressing Poverty from the Bottom Up is the bold action we need to address the inter-connected injustices of systemic racism, ecological devastation, and militarism.

Contact Congress to support legislation that would redirect military funding to invest in human needs!

We can’t allow politicians to use unfounded fear mongering to justify unlimited U.S. military budgets. Together with our progressive movement allies and in solidarity with 140 million poor and low income people across the United States, we must begin the critical task of moving money from the Pentagon to urgent domestic needs.

Towards peace and justice,