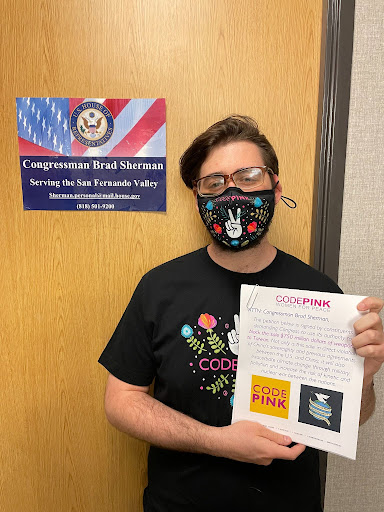 CODEPINK’s China is Not Our Enemy campaign, along with co-sponsors The Campaign for Peace, Disarmament, & Common Security; World Beyond War; and RootsAction.org, gathered and delivered signatures from over 3,000 people in less than 30 days. These signatures were gathered with urgency in this limited window of time during which Congress has the authority to block an arms deal after it has been approved by the State Department. In addition to the direct delivery to Congressman Sherman in the San Fernando Valley, CODEPINK emailed the letter and signatures to every Democrat in the House of Representatives, since many representatives still refuse to meet with their constituents due to COVID-19. 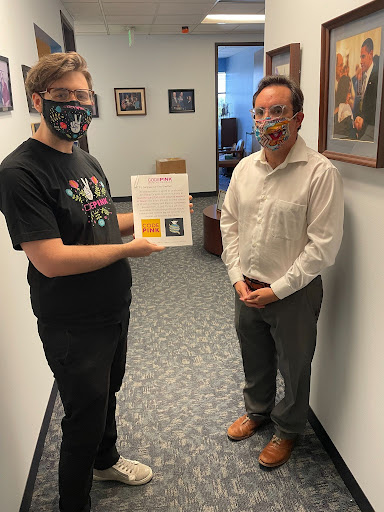 While this weapons sale was approved by the State Department on August 4th 2021, Congress can block or limit arms deals through legislation right up to the delivery date and we are urging members to pursue this path to curtailing the arms deal even after the initial 30 days. As the letter states “given China’s overwhelming military superiority over Taiwan, more weapons will do nothing to enhance Taiwan’s self-defense; instead they will further deepen Taiwan’s military reliance on the U.S., making U.S. involvement in a future China-Taiwan clash increasingly likely."

After the catastrophic failure of the U.S. War in Afghanistan created a massive humanitarian crisis, we believe it is unacceptable for the U.S. to make new deals that will deepen other countries' reliance on the U.S. military. Recent reporting shows that Taiwan’s air force has already spent more than $14 million dollars to retain U.S. experts on patriot missiles and this proposed $750 million dollar weapons sale would enlist more U.S. Government technical, engineering, and program support services. Embedding U.S. military contractors and mech/tech services within Taiwan's military creates a situation similar to the War in Afghanistan where U.S. forces can not withdraw without threatening the collapse of entire branches of Taiwan’s military. This means that any conflict between Taiwan and China risks becoming a much larger U.S.-China war that could easily evolve into nuclear warfare that would threaten the entire island of Taiwan and it’s more than 23 million residents, as well as all life on Earth.

In the wake of the US’s corrupt & disastrous war in Afghanistan, we must not let collective amnesia allow us to accept more US interventionism & forever wars abroad that only lead to more death, destruction, human rights crises, climate devastation & blowback. #USoutofAsia pic.twitter.com/L50aJWvTzv

Beyond the incredibly high stakes of warfare, this deal is horrendous for U.S.-China diplomacy as well, as China’s Foreign Ministry has called the proposed sale a violation of China’s sovereignty. Additionally this sale would violate the Three U.S.-China Joint Communiqués — specifically, the U.S.’s official “One China” policy. Instead of committing to selling more polluting and destructive weapons the U.S. government should work with China, the second largest economy in the world, to address global issues like climate change and public health.