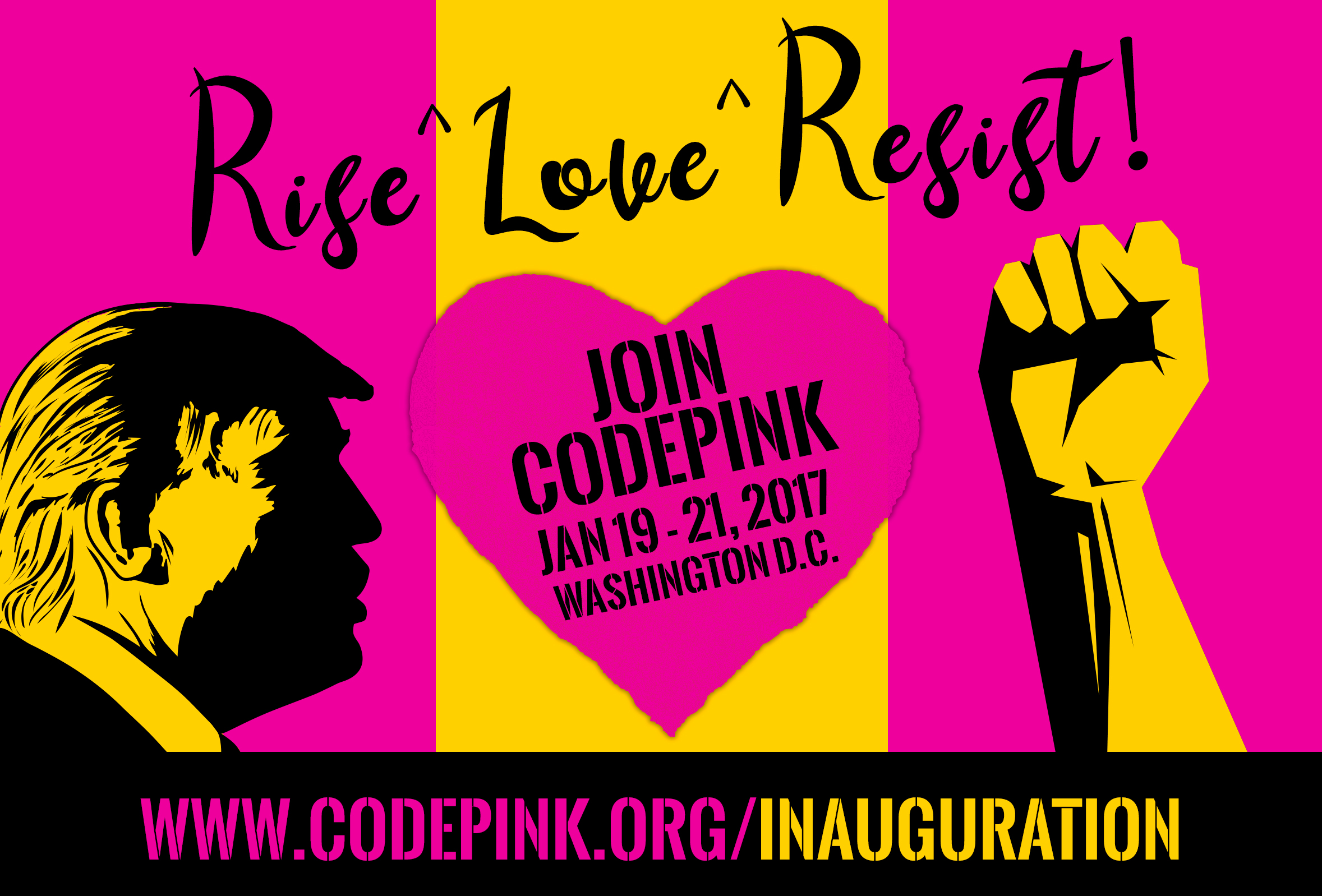 Washington DC, January 18, 2017 - CODEPINK made international headlines last week protesting Senator Jeff Sessions’ confirmation hearing dressed as KKK members. This Thursday will be the first of our three days of Rise^Love^Resist in the streets of WDC. We will be engaged in the following actions on January 19th.

“We will express the audacious power of women to stand up to militarism, misogyny and hate, and to be in solidarity with those most vulnerable within the US and in the countries negatively affected by US foreign policy,” said CODEPINK cofounder Jodie Evans.

“While CODEPINK protested the endless wars during the Obama years, very few people came out to join us. Now we have an outpouring of women—young, elderly, former activists and newbies—who are determined to get active,” said Ariel Gold, a mother of two young teenagers. “This inauguration is just the beginning.”

1:00-2:00 PM  Pussy Hat Distribution 1241 Evarts St NE Washington, DC.
CODEPINK invites the media to film and do interviews as we prepare for our inauguration activities, including being a distribution spot for 5400 “pussy hats” that have been knitted by women across the country and will be worn during the Women’s March on Washington. We will be painting hearts and other materials that we will use during out bold creative actions to protest Trump’s inauguration.

2:30 PM Lincoln Memorial - CODEPINK will protest Trump's Make America Great Again! Welcome Celebration Concert. We will meet at the Soldiers Statue of the Vietnam War Memorial on the Mall just northeast of the Lincoln Memorial to welcome concert attendees with messages of ending war and militarism; welcoming refugees and immigrants; stopping hate, racism, and Islamophobia.

8:00 PM Protest the Fascist Alt-Right "Deploraball"protest of the pro-Trump at the National Press Club, 529 14th St NW. The protest takes place outside the Press Club. We will be dressed in bright colors with signs expressing audacious resistance to the hatred of the Alt-Right.

Founded in 2002 to prevent the US war on Iraq, CODEPINK is a women-led grassroots organization working to end U.S. wars and militarism, support peace and human rights initiatives, and redirect our tax dollars into healthcare, education, green jobs and other life-affirming programs.