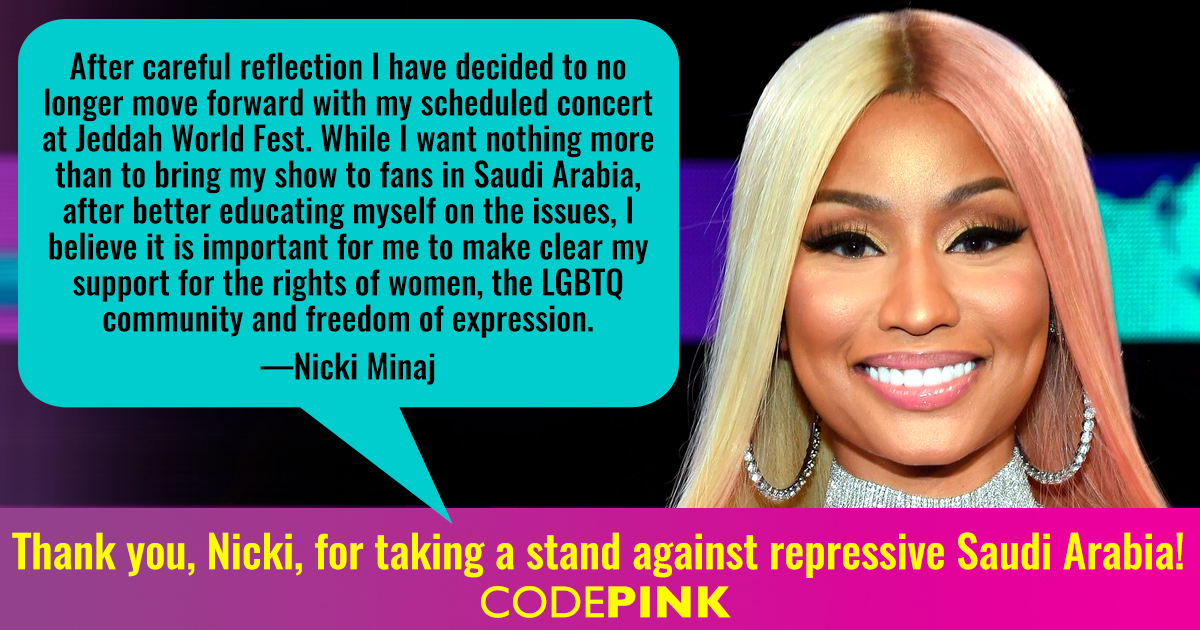 CODEPINK activists send their thanks to Nicki Minaj for cancelling her July 18th performance in Saudi Arabia due to concerns about the Kingdom’s human rights violations. CODEPINK had sent Minaj a petition, signed by thousands, asking her to cancel her act at the Jeddah World Fest so as to not artwash the Saudi government’s treatment of women. We are delighted that Minaj has listened to us and other human rights organizations, and that she is using her platform to explicitly stand up for women, LGBTQ folks, and freedom of expression around the globe.

The petition asking Nicki Minaj to cancel her Saudi Arabia performance is part of CODEPINK’s Boycott Saudi campaign, launched in January 2019, which calls on all musicians, artists, businesses, think tanks and universities to sever ties to the Saudi regime. The broad-based campaign was announced after Mariah Carey refused to cancel her January concert in Saudi Arabia. CODEPINK has asked numerous other entertainers to cancel their performances: The Black Eyed Peas, Dutch DJ Tiesto, Yemeni-Emirati singer Balqees Fathi and Jamaican rapper Sean Paul. Minaj is the first musician to do so.

We have had other successes. In October 2018, along with a broad coalition, we helped convince dozens of companies and notables, from the New York Times to Uber CEO to the head of the World Bank, to pull out of the Saudi Future Investment Initiative. We then focused on the PR firms working for the Saudis. Five of them—including BRG Group, Glover Park Group and the Harbour Group—agreed to sever ties with the kingdom.

CODEPINK has an ongoing campaigns asking Lush Cosmetics to close their two stores in Saudi Arabia, in alignment with their role as a socially conscious company, and asking Vice Media not to produce promotional/propaganda videos for Saudi. We are also part of a broad-based coalition of human rights and humanitarian groups pressuring Congress to end the administration’s logistical support for Saudi’s war on Yemen and to end weapon sales to the Saudi Kingdom. We plan to continue our boycott by launching a campaign with European partners to ask the G20 not to meet in Saudi Arabia in 2020.

“We are very thankful that Nicki Minaj responded to the concern of activists and fans by canceling her Saudi performance,” says CODEPINK Co-director Ariel Gold. “It is important to see Nicki Minaj, an outspoken advocate for women’s freedom, stand in solidarity with Saudi women like activist Loujan al-Hathloul, imprisoned for the ‘crime’ of having campaigned for Saudi women to drive.”

Saudi Arabia is one of the world’s most repressive, misogynist, gender-segregated countries in the world. Saudi Arabia subjects women to the oppressive male guardianship system, in which all Saudi women need permission from a male to travel, study, obtain a passport, and marry. Saudi women activists are right now languishing in prison, subjected to horrific beatings, electroshock, and sexual harassment as punishment for their activism. Saudi is the cause of the worst humanitarian crisis on earth: the war in Yemen. Since 2015, 85,000 children under the age of five have died from acute malnutrition as a result of the war.

“While our government continues to support Saudi’s horrific war on Yemen, Nicki Minaj’s decision not to artwash the human rights violations of the Saudi government is inspiring,” says CODEPINK Co-founder Medea Benjamin. “We hope that other entertainers, businesses and our government itself follow Minaj’s example and end their complicity with the repressive Saudi regime.”