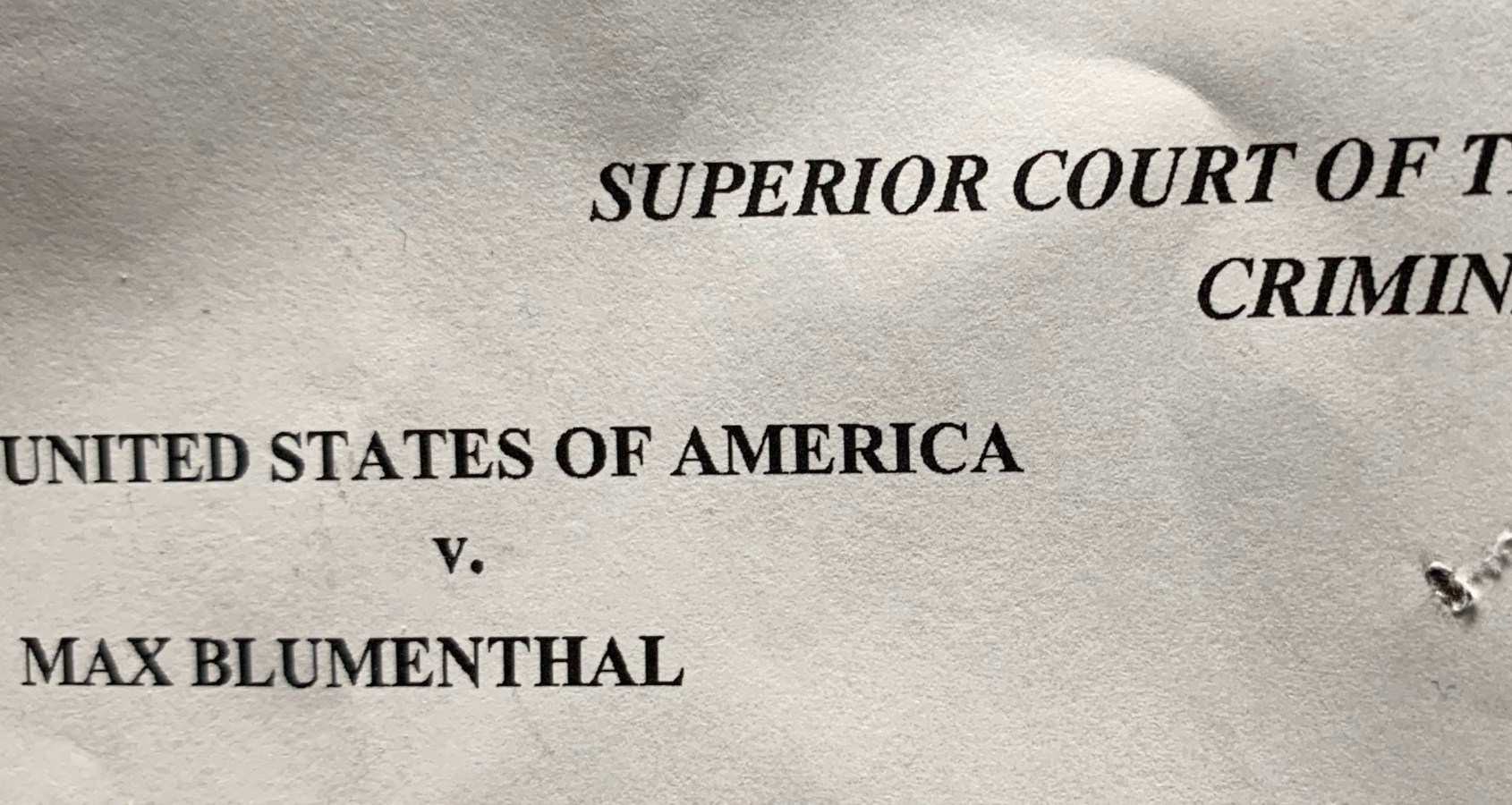 October 30, 2019 — CODEPINK strongly condemns the arbitrary detention of journalist Max Blumenthal on charges of simple assault. Blumenthal was subjected to a SWAT-style raid and arrest at his home on October 25, then held for two days, denied access to a phone call and a lawyer. The spurious charges against Blumenthal stem from the delivery of food to activists who were lawfully staying in the Venezuelan Embassy in April and May of this year in an effort to prevent the Trump administration from violating international law and handing the building over to the Venezuelan opposition.

The Embassy had been besieged by a mob that attempted to block the entry of food, supplies and people. This mob turned violent, assaulting peace activists and yelling racist, homophobic, sexist and classist insults at anyone perceived to be defending the embassy. “We were beaten up every day by opposition thugs at the Venezuelan Embassy, but the police refused to prosecute them. Instead, they went after us and sympathetic journalists like Max,” CODEPINK co-founder Medea Benjamin tweeted. Ariel Gold, National co-director of CODEPINK, was “physically and sexually assaulted” and denounced the police’s refusal to act, despite being presented with video evidence.

Rather than arresting those engaging in violence, the Metropolitan Police and Secret Service turned a blind eye to the assaults and instead arrested the peace activists. Gold was arrested and charged with “throwing a missile” for attempting to toss a loaf of bread inside the Embassy. CODEPINK member Tighe Barry was arrested for allegedly assaulting a police officer, spending three days in jail and five months going back and forth to court before the charges were dropped. Gerry Condon, president of Veterans for Peace, was arrested and beaten by Secret Service officers for attempting to toss a cucumber into the building.

Blumenthal’s arrest warrant was initially rejected before being “revived months later without the defendant’s knowledge.” His detention occurred five months after the events in question, but mere hours after his outlet, The Grayzone, published an article detailing USAID funding for Venezuelan lobbyists.

“This charge is a 100 percent false, fabricated, bogus, untrue, and malicious lie,” Blumenthal declared. “It is clearly part of a campaign of political persecution designed to silence me and The Grayzone for our factual journalism exposing the deceptions, corruption and violence of the far-right Venezuelan opposition.”

This arbitrary detention is a clear violation of the First Amendment that ought to be denounced by all those who value freedom of the press.  It is a chilling attempt to silence one of the most vocal critics of U.S. foreign policy.

The blatant illegality of his arrest is not surprising, as the Trump administration has violated the Vienna Convention in handing over the Venezuelan Embassy to the opposition, violated Venezuela’s sovereignty by recognizing Juan Guaidó as “interim president” of the country, and violated international law and its obligations under the Organization of American States and the United Nations by imposing unilateral coercive measures (i.e. “sanctions”) that amount to a de facto embargo of Venezuela. This collective punishment has harmed all Venezuelans and led to the deaths of at least 40,000 people.

CODEPINK stands in solidarity with Max Blumenthal and we will continue working with him and like-minded people to stand up for international law and denounce the ongoing U.S. backed coup attempts in Venezuela.