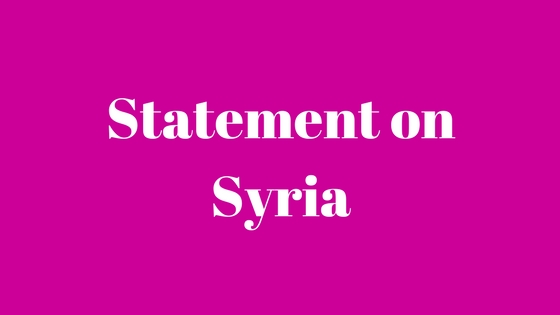 Washington, DC - CODEPINK: Women for Peace condemns the use of chemical weapons in Syria as a grotesque affront to our common humanity and a violation of the international Chemical Weapons Convention. We also condemn the endless cycle of violence that has continued and escalated over the past seven years.  In 2017 alone, more than 10,000 Syrian civilians were killed. At least half of Syria’s 22 million people have been displaced due to the conflict, creating a global refugee crisis. The war must come to an end!

Over the years, an internal conflict between the Assad regime and rebel groups has morphed into an international conflict that now includes Russia, the United States, Iran, Saudi Arabia, Turkey and the Kurds. Numerous proxy wars are being played out on Syrian soil, with the Syrian people suffering the consequences.

The only way to end this war is to demand that all parties involved enact a ceasefire and come to the negotiating table to discuss a path forward. This is how most wars end, and this is how the Syrian conflict will end. More military action on the part of the US military, as the Trump administration is presently contemplating, will only escalate the crisis. We urge Congress to do everything in its power to prevent the Trump administration from unilaterally launching unauthorized military strikes.

As we continue to push for a ceasefire, the international community must place the protection of the Syrian people at the forefront of its efforts. There must be an immediate airdrop of food and supplies to places under siege; food and medicine convoys must be able to travel unhindered; and more resources must be allocated to the needs of the millions of beleaguered Syrian refugees.

CODEPINK will continue to search for ways to support the impacted refugees, advocate for peace, and urge an immediate ceasefire.