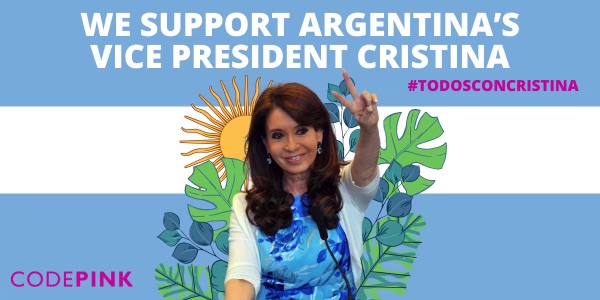 WASHINGTON - CODEPINK is appalled and outraged at the assassination attempt against Argentina’s Vice President Cristina Fernandez de Kirchner. Last night a man pointed a firearm with 5 bullets at her head and triggered it. For an unknown and fortunate reason, the weapon did not fire and the Vice President was unharmed.

We have closely followed the news and have observed the harassment, persecution, and lawfare targeting Cristina Fernandez. This terrible attempt is the consequence of a discourse of hatred, violence and lies around her image that have been promoted by far right-wing and national and international groups.

We express our solidarity with the Vice President of Argentina, and with the Argentinean people who fight every day for a dignified life in peace. We make an urgent call to the media and leaders of the world to reject the hate speech and political violence that threatens democracy and peace in Argentina.