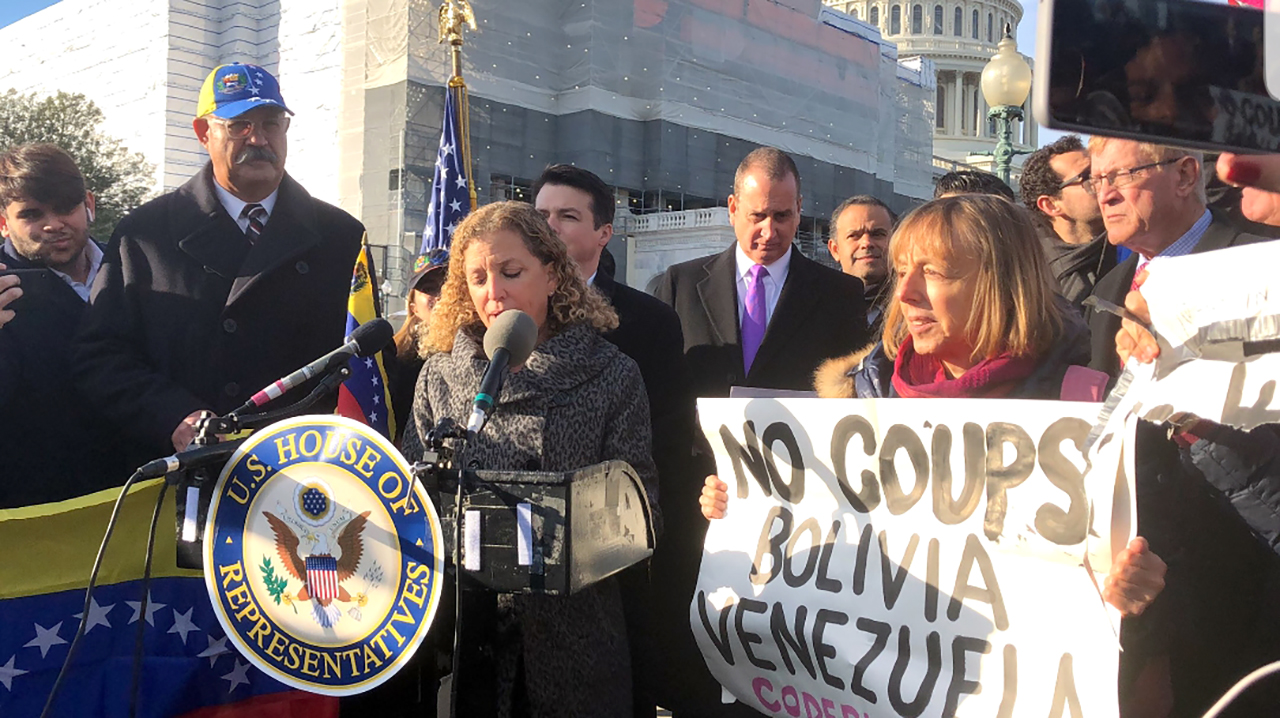 Congress members Debbie Wasserman Schultz and Mario Diaz-Balart were speaking at the press conference, which included fake “ambassador” of Venezuela Carlos Vecchio, when Medea Benjamin was violently grabbed by Venezuelan opposition members in the audience and pulled backwards, shoving her outside of the circle they had created around the press conference. Medea Benjamin had been holding a sign reading “No Coup in Venezuela or Bolivia,” which was ripped from her hands by some opposition members while others jeered and chanted.

Afterwards, when Benjamin was back at home, five police cars and several police on motorcycles pulled up to her house, in a terrible show of intimidation, and said she was being arrested on entirely false allegations that she assaulted Wasserman Schultz at the rally. The police, who did not have a warrant and hadn’t reviewed the video taken at the press conference, based their intention to arrest Benjamin on false reports made by the same group of people who assaulted Benjamin. Benjamin documented the scene on Facebook Live as DC police surrounded her house in an attempt to arrest her on false charges.

CODEPINK members in DC were present at the press conference to show opposition to the US-led regime change efforts and the economic blockade imposed by the US on Venezuela. Activists attempted to hold signs in peaceful dissent but the opposition members tore and stole the visuals that called for US Hands Off Venezuela and the end of US coup efforts. After Medea Benjamin was assaulted and physically removed from the circle, opposition members then called Capitol Hill police to remove activists from the public press conference, and one police officer issued a warning that the activists would be arrested if they kept chanting “Hands off Venezuela.”

“This intimidation shows how the US security forces work hand-in-glove with the right-wing forces in Latin America who are trying to stop progressive movements that empower the poor,” said CODEPINK co-founder Medea Benjamin.