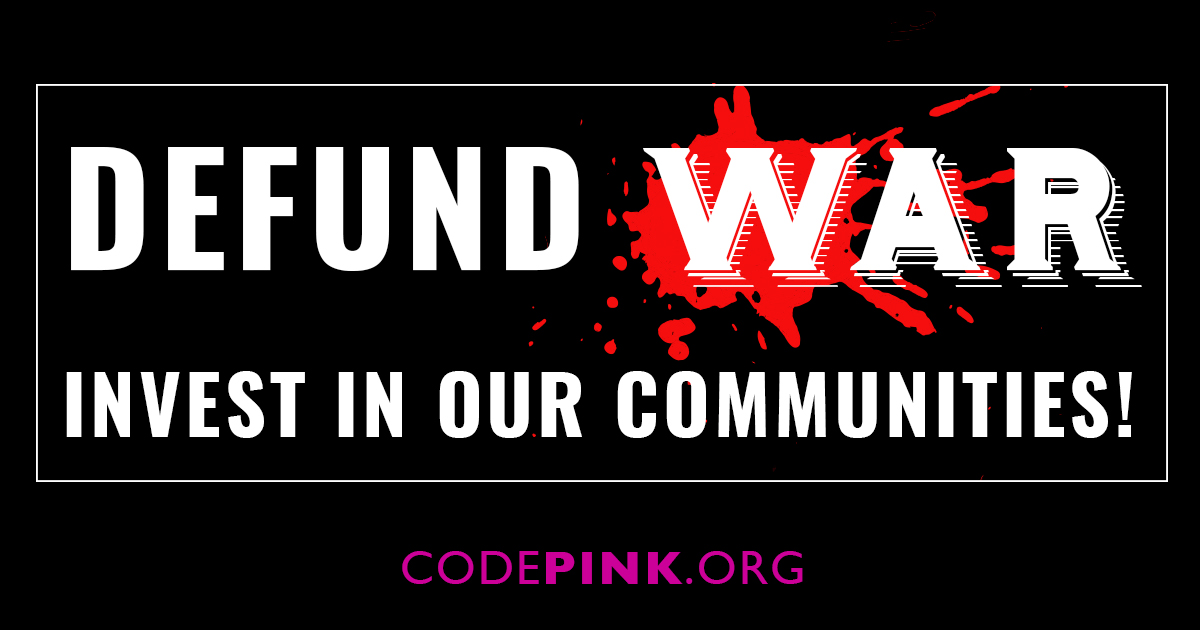 March 16, 2021- Today, 50 members of Congress, led by Representatives Barbara Lee, Mark Pocan, and Jake Auchincloss sent a letter to President Joe Biden urging him to reduce defense spending in his FY2022 budget. CODEPINK, along with a coalition of civil society groups, applauds the lawmakers and urges President Biden to heed their call.

The letter, supported by a transpartisan coalition ranging from foreign policy organizations to environmental organizations to faith-based groups, outlines the need to re-evaluate our spending priorities as a nation. The letter cites the hundreds of billions of dollars now directed to the military that would be better spent on humanitarian aid, global health, and sustainability initiatives.

The full letter is available here, and additional quotes from supporting organizations are here.

Carley Towne, co-Director of CODEPINK and coordinator of the Defund the Pentagon campaign, said, “Cutting the Pentagon budget and reinvesting in the needs of our communities is not only morally necessary, it's also urgent if we're going to address the biggest threat that faces our planet: climate change. The Pentagon is the world's single largest consumer of oil and one of the world's top greenhouse gas emitters. If we're going to take the future of our planet seriously, we need to cut the Pentagon budget now.”

The letter also highlights concern over recent reports indicating that the Biden Administration is poised to propose a FY2022 budget with the same level of Pentagon spending as the last fiscal year, despite the fact that the new Democratic majority elected to Congress was expected to rebuke the values of the previous administration and address the ongoing public health crisis.

“President Biden has said that ending poverty would be a theory of change in his Administration,” said Rev. Dr. Liz Theoharis, Director of the Kairos Center for Religions, Rights and Social Justice. “We know we can’t end poverty or systemic racism or address the scourge of this pandemic, without also addressing our distorted spending on militarism and redirecting resources towards meeting our basic needs.”