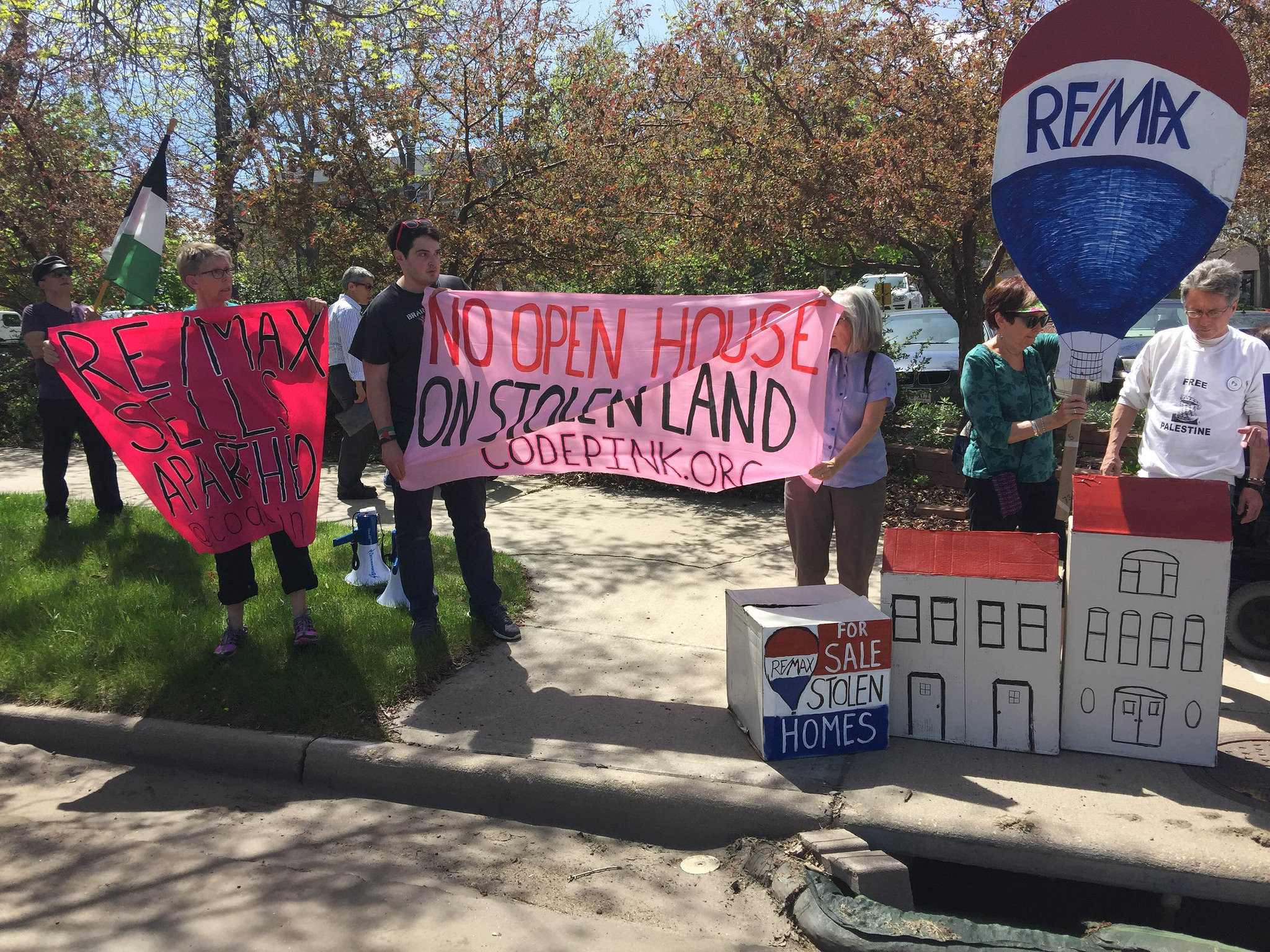 DENVER, May 4, 2016 –– Today, 50 human rights supporters from CODEPINK, Front Range Jewish Voice for Peace, Friends of Sabeel - North America, and Coloradans for Justice in Palestine protested outside the RE/MAX annual shareholder meeting at the Marriott Tech Center Hotel. They held signs reading “No Open House on Stolen Land” and “RE/MAX sells apartheid.” Some of the protesters wore large cardboard boxes painted as Israeli settlements to illustrate their point.

While the group protested outside, shareholders inside the meeting advocated for a shareholder resolution calling on RE/MAX to set up a committee to study the company’s involvement in selling homes in Israel’s illegal settlements in violation of international law. CODEPINK organizer Ariel Gold spoke inside the meeting on behalf of RE/MAX shareholder and CODEPINK founder Jodie Evans:

We have seen the power of international campaigns to hold companies responsible for profiting from and contributing to Israel’s illegal settlement enterprise. Following a sustained campaign led by CODEPINK, Ahava Dead Sea Laboratories, an Israeli cosmetics company with its main production facility in the Occupied West Bank, announced this past March that they will be moving their factory out of the West Bank to within Israel’s recognized borders.

Denver-based RE/MAX International profits from the sales that its franchisee RE/MAX Israel makes in illegal Israeli settlements in the West Bank. Agents from RE/MAX Israel do business in all the major West Bank settlements, including those in Occupied East Jerusalem, in violation of international law. The Fourth Geneva Convention states that an occupying power may not move its civilian population onto the territory it is occupying. RE/MAX’s profiteering and complicity have drawn condemnation from human rights activists around the world. A recent report by Human Rights Watch entitled “Occupation, Inc.: How Settlement Businesses Contribute to Israel’s Violations of Palestinian Rights,” directly indicting RE/MAX LLC, states:

Since 2014, CODEPINK has been calling on RE/MAX to stop profiting from Israeli violations of international law. The Remodel RE/MAX campaign asks RE/MAX LLC to set standards for its franchises prohibiting them from selling, renting or advertising properties built on illegally seized land in the Occupied Palestinian Territories and that RE/MAX agents and members of the RE/MAX network should not refer clients to agents and brokers who are involved in such activities.

Photos of the protest are available here. To arrange for an interview with Ms. Gold or one of the people protesting outside the meeting, contact Sam Ritchie at (347) 452-0008 or [email protected].