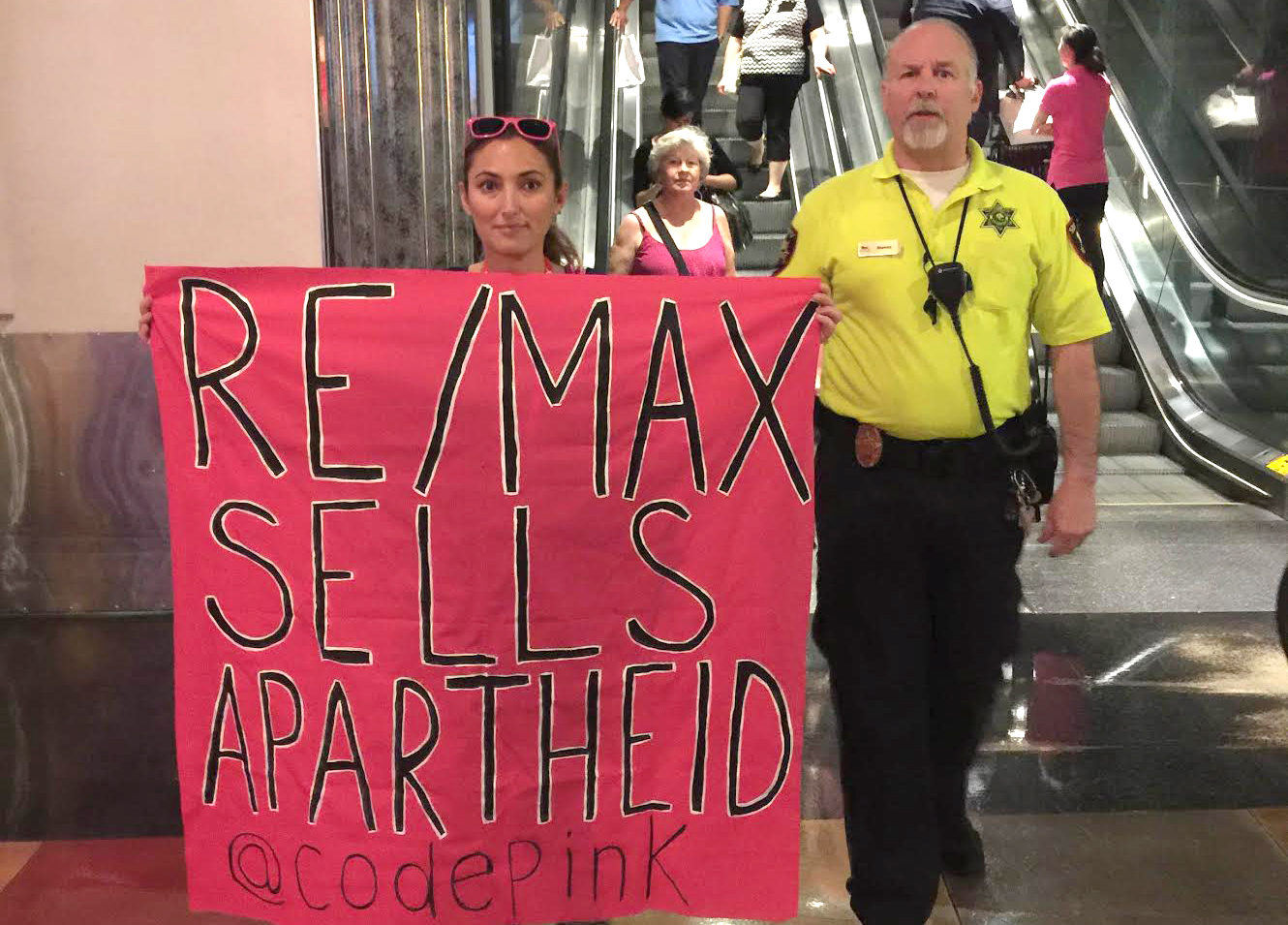 Las Vegas, Nevada –– On Tuesday, March 2, CODEPINK activists, Jodie Evans and Ariel Gold disrupted a talk by RE/MAX Israel’s vice president of marketing, Gil Li-Ran, at the RE/MAX Real Estate R4 convention in Las Vegas to protest RE/MAX sales of homes in illegal Israeli settlements. Evans and Gold unfurled a banner reading “No Open House on Stolen Land” during Li-Ran's talk. Evans and Gold were ejected from the room and the convention.

"People around the world are waking up to the immorality of settlement profiteering, and it is unclear why RE/MAX continues to risk its brand's reputation through its involvement in illegal activities in the Occupied West Bank," said CODEPINK co-founder Jodie Evans. “This is why I felt compelled to speak out during the RE/MAX Real Estate Convention in Las Vegas.”

Denver-based RE/MAX International is profiting from the sales that its franchisee RE/MAX Israel makes in illegal Israeli settlements in the West Bank. Agents from RE/MAX Israel do business in all the major West Bank settlements, including those in Occupied East Jerusalem, in violation of international law. The Fourth Geneva Convention states that an occupying power may not move its civilian population onto the territory it is occupying. RE/MAX’s profiteering and complicity have drawn condemnation from human rights activists around the world. A recent report from Human Rights Watch entitled “Occupation, Inc.: How Settlement Businesses Contribute to Israel’s Violations of Palestinian Rights,” directly indicting RE/MAX LLC, states:

Since 2014 CODEPINK has been calling on RE/MAX to stop profiting from Israeli violations of international law. The Remodel RE/MAX campaign asks RE/MAX LLC to set standards for its franchises prohibiting them from selling, renting or advertising properties built on illegally seized land in the Occupied Palestinian Territories and that RE/MAX agents and members of the RE/MAX network should not refer clients to agents and brokers who are involved in such activities.