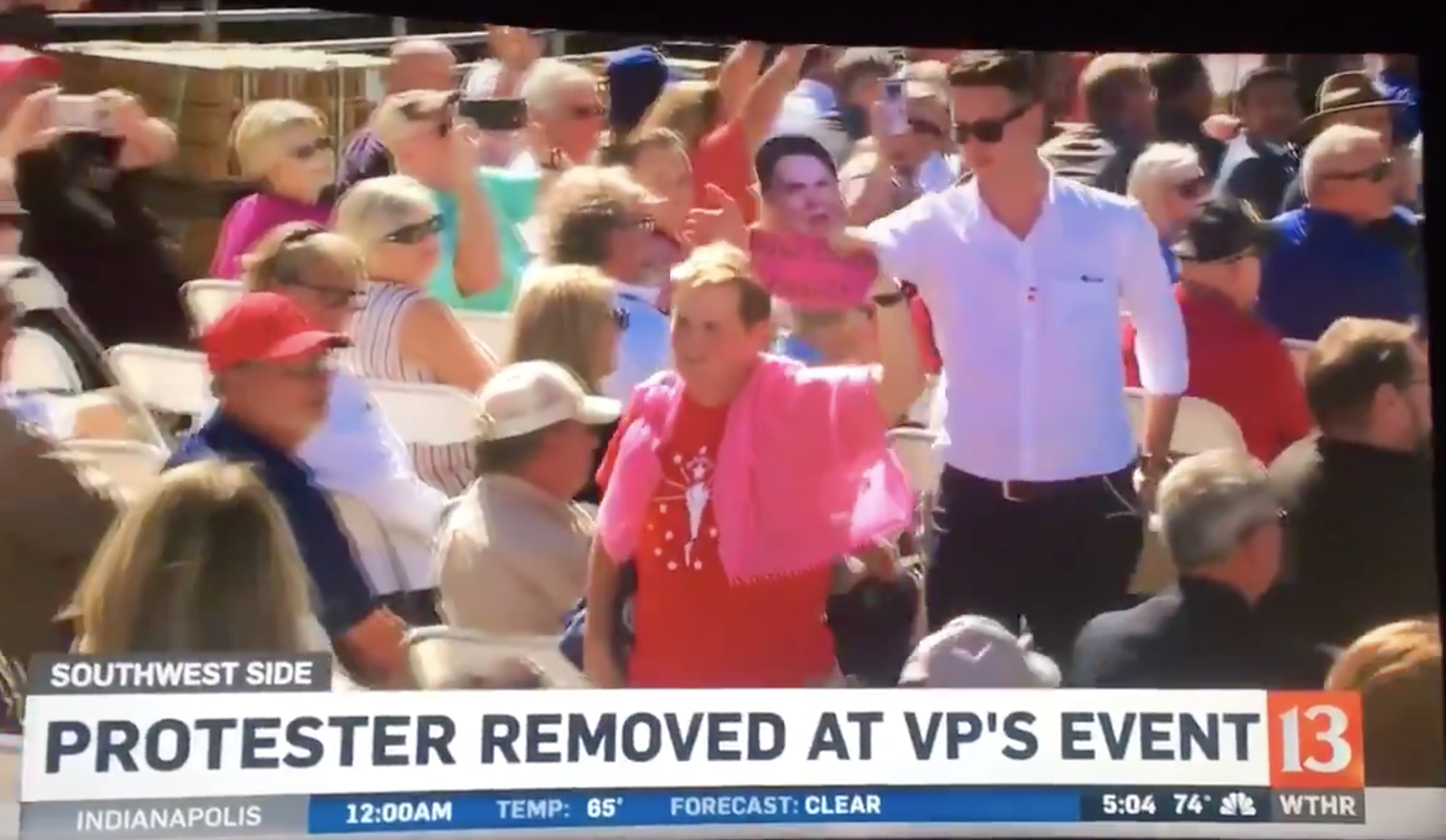 September 24, 2019 — Lori Perdue, an Air Force veteran and activist with the peace group CODEPINK, confronted Vice President Mike Pence during his visit to Indiana this week. “How dare you,” she yelled while standing on her chair. With a mask of the 16-year-old environmentalist Greta Thunberg and holding a signing with Greta’s words “How Dare You,” Perdue shamed Pence for shilling for oil companies and trade associations trying to defeat the Green New Deal.

“As a Hoosier and an American Veteran. I love my country, my state and this city and so cannot sit silently by while VP Pence brings a selfish, tone-deaf message of ignoring a global climate crisis and, as Greta Thunberg said at the United Nations, ‘telling fairy tales of eternal economic growth.’ How dare he come here to shill for Big Oil?” said Perdue. “This administration has come to Indiana with promises and rhetoric about increasing and keeping jobs in Indiana. But these promises, too, are empty, as Pence and the rest of the Trump administration have failed to deliver and Hoosier families and the environment are paying the price.”

Perdue decries the lack of seriousness Pence and the Trump administration give to the climate crisis. As a U.S. Air Force Veteran and a Veteran of the Indiana Air National Guard, she also criticizes the Pentagon for being the single largest institutional consumer of fossil fuels in the world and monopolizing the funding needed to seriously address the climate crisis. “The US spends over half of its federal government’s annual discretionary budget on the military and in turn, the military ensures that US companies have access to extractive industry materials, particularly oil, around the world, all at the expense of the climate and people immediately affected by the climate crisis,” said Perdue.

The group hosting Pence, America First Policies, opposes the Green New Deal, the best mechanism the US has right now to address the climate crisis. Pence’s visit to his home state of Indiana took place just days after the Trump administration was scolded at the UN by Greta Thunberg for refusing to take the climate crisis seriously and pandering to oil companies.