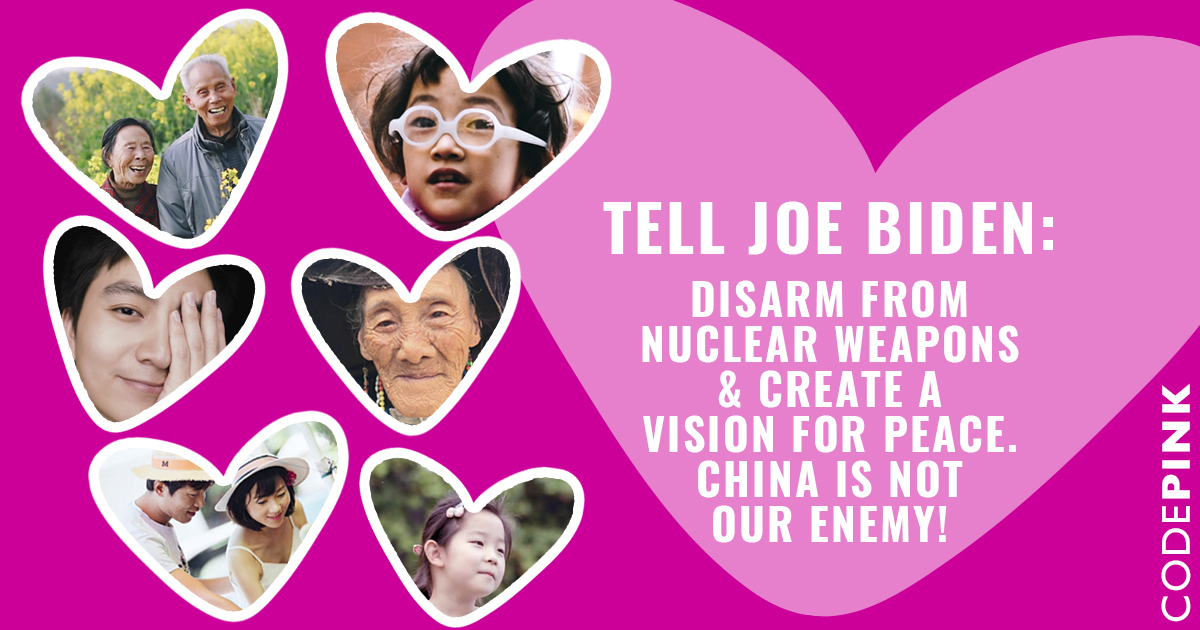 WASHINGTON – Today, a coalition of progressive organizations, including CODEPINK, WAND, WILPF, and Massachusetts Peace Action delivered a petition with 4,800 signatures to the Biden and Trump campaign expressing the urgent need to incorporate a  vision of peace and serious nuclear disarmament in their campaign platforms. The petition lays out five clear nuclear disarmament planks to add to their campaign platforms:

In addition to the petition, members of the coalition also released the following comments:

Jodie Evans, Co-Director of CODEPINK: August 6 and August 9th marks the 75th anniversary of the United States dropping atomic bombs on Hiroshima and Nagasaki. 75 years later, the United States remains one of only a handful of countries in the world which refuses to agree to a No First Use policy as our elected officials continue to pour billions into the production and maintenance of nuclear weapons. Instead of funding the production of nuclear weapons and escalating tensions with China, we need to come together as a global community to address a real existential threat: climate change.

Jonathan King, Co-Chair of Massachusetts Peace Action: President Trump is withdrawing from nuclear weapons treaties and agreements with Russia, talking about renewing nuclear weapons testing in violation of the Comprehensive Test Ban treaty, and supporting spending $2 trillion of our tax dollars over the next 30 years upgrading our nuclear weapons triad. We need Joe Biden to pull us back from this new nuclear arms race, which can only undermine our security, and starve the economy of critical public health needs.

Alan Robock (distinguished Professor of Climate Science, Rutgers University): Even a 'limited' nuclear war between nuclear-armed nations can cause untold local death and destruction, as well as global climate and agricultural catastrophes, because of the climate impacts of smoke from fires ignited by nuclear weapons.

Max Tegmark (Professor of Physics MIT, President of Future of Life Institute): The greatest threat to US national security is an accidental nuclear war, which has almost occurred multiple times. This risk will grow if we breach the Comprehensive Test Ban Treaty, triggering further mistrust and proliferation.

Elaine Scarry author of Thermonuclear Monarchy The United States urgently needs a leader who will have the courage to look at, think hard about, and speak openly about the dire perils posed by our country's vast nuclear arsenal.

Ira Helfand, Co-President of the International Physicians for the Prevention of Nuclear War Despite the enormous immediate crisis posed by COVID and the economy, we can not lose sight of the existential threat posed by nuclear weapons. The danger of nuclear war is great and growing.  Joe Biden needs to have a comprehensive plan, such as the Back from the Brink platform for dealing with this threat and eliminating these weapons before time runs out