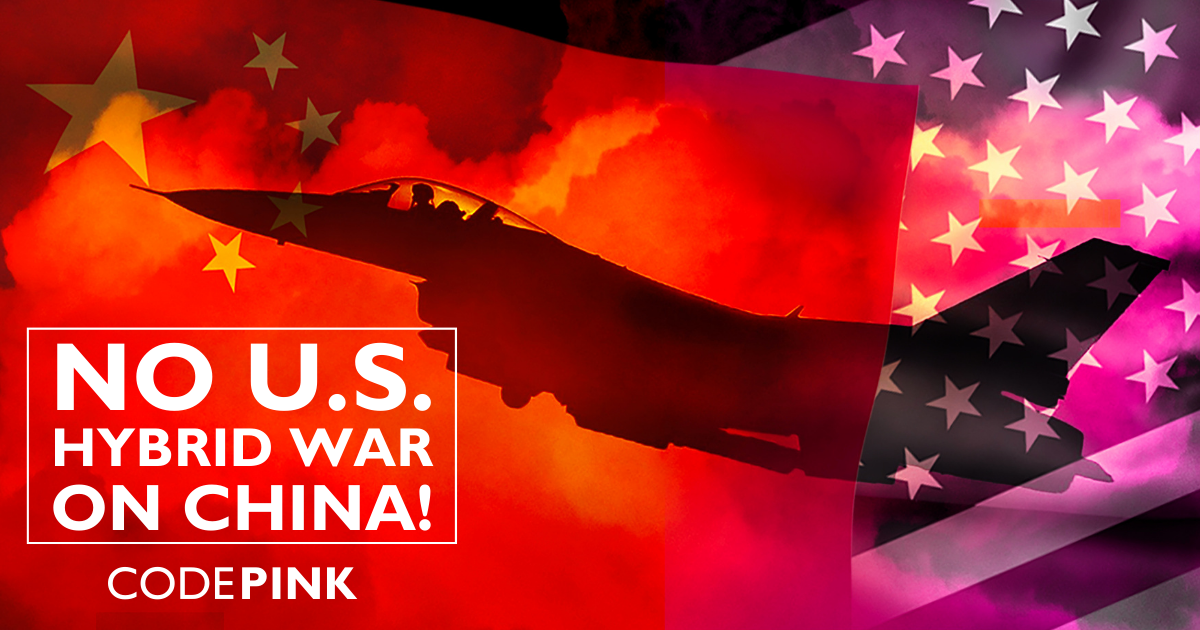 September 17, 2021 — CODEPINK condemns the new trilateral security and military alliance between the United States, Britain, and Australia (AUKUS). As part of this historic alliance, which will bind the three nations’ security for generations to come, the U.S. and the U.K. will assist Australia in acquiring nuclear-powered submarines, technology, and support services. President Biden, while announcing the initiative with the leaders of Australia and the U.K. at the virtual press conference on Wednesday, said the decision was made in response to the nations’ shared “imperative of ensuring peace and stability” in the region over the long term and the need to “defend against rapidly evolving threats.”

However, as coordinator of the CODEPINK China Is Not Our Enemy campaign Madison Tang said, “This alliance, and the extensive arms and nuclear technology sales that coincide with it, are anything but defensive. Contrary to President Biden’s assurance that the AUKUS alliance will ensure ‘peace and stability,’ it will in reality severely undermine opportunities for peace, stability, cooperation, and survival in the region — and beyond — by damaging global nonproliferation efforts and escalating the West’s increasingly dangerous hybrid war on China.”

The U.S. has only ever shared nuclear propulsion technology with one country before — through a 1958 agreement with the U.K. establishing the “special relationship” between the two nations. A U.S. official even went so far as to describe the alliance as going against established U.S. practice, stating, “This technology is extremely sensitive. This is, frankly, an exception to our policy in many respects.” Among the U.S. firms that are set to benefit from the nuclear-powered submarine transfer are General Dynamics Corp, Huntington Ingalls Industries Inc, and BWX Technologies Inc.

Notably, high-ranking Pentagon officials, including one admiral and one general, have voiced their concerns in the last few days about the absolute imperative that we steer clear of nuclear conflict, yet this AUKUS partnership is headed precisely in the opposite direction. General John E. Hyten, vice chairman of the U.S. Joint Chiefs of Staff, said on Monday, "Our goal should be to never go to war with China, to never go to war with Russia. Because that day is a horrible day for the planet, and a horrible day for our countries." Retired U.S. admiral and former head of U.S. Pacific Command Harry Harris also said, "[I]t's very important that we do everything that we can to prevent an escalation and open warfare" with China.

In Australia, the AUKUS alliance is already causing public concern due to the prospects of increased U.S. weaponry, naval port expansions, surveillance and remote targeting operations, and U.S. troop deployments that make Australia an immediate target in the event of kinetic and/or nuclear war. CODEPINK emphasizes that this is part of an ongoing trend in which U.S. military and government contractors become increasingly embedded in the maintenance and infrastructure of another nation's military, to the extent that that nation becomes dependent upon the United States for its survival. In New Zealand, Prime Minister Jacinda Ardern confirmed that Australian nuclear-powered submarines would be banned from entering New Zealand's territorial waters in accordance with the nation’s decades-long ban on nuclear-powered vessels.

The partnership also comes on the heels of the State Department’s August 25th approval of a proposed U.S. Foreign Military Sale to Australia. The estimated value of the sale is $350 million, and it would include Standard Missile 6 Block I (SM-6) and Standard Missile 2 Block IIIC (SM-2 IIIC) missiles, along with extensive development, engineering, integration, testing, analysis, and program support. The principal U.S. contractor benefitting from the sale will be Raytheon Missiles and Defense (RMD).

While Australian Prime Minister Scott Morrison, U.K. Prime Minister Boris Johnson, and U.S. President Joe Biden have stressed that the partnership was not aimed at any one country, this exceptional technology transfer occurs within the context of a rapidly escalating and aggressive hybrid war on China by the West that has included military buildups, trade hostility, the politicization and weaponization of COVID-19 conspiracies and other misinformation, and the shoring up of strategic alliances in the Asia-Pacific against China. The next step in this hybrid war could be kinetic military conflicts that threaten to devastate entire coastlines and portions of the Pacific, killing millions and bringing us closer to climate extinction.

In order to prevent a U.S.-China war that would be catastrophic for all of humanity, the U.S. must stop creating irresponsible security pacts that dichotomize the world’s nations into either useful allies or sensationalized enemies for more saber-rattling and war profiteering. Rather than a unipolar world order dominated by the U.S., or a bipolar world order of clashing East vs. West systems and values, the U.S. should be de-escalating this arms race and conflict by promoting multilateral respect and cooperation in the face of the ongoing global crises of climate catastrophe, the pandemic, economic immiseration.

To learn more about the China Is Not Our Enemy campaign, visit our site or follow us on Twitter! ✌️💞