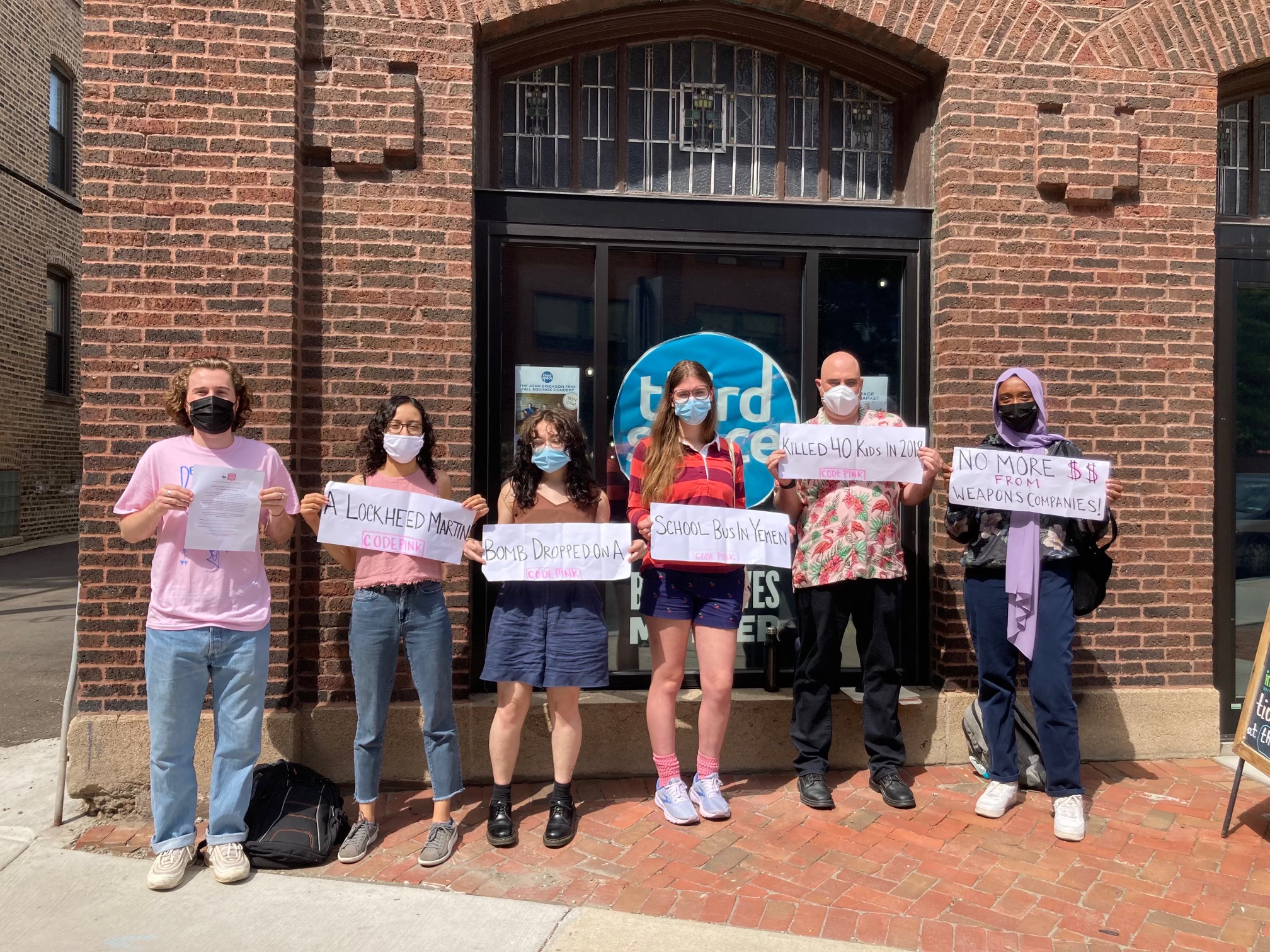 Group’s intent to ask Representative Quigley to divest in campaign contributions met with speech on how “weaponry is humanitarian aid.”

CHICAGO: On September 6th members of CODEPINK’s Chicago group “DivestMike” sat in at an AARP community meeting in Lakeview Presbyterian Church that was featuring their congressman, Mike Quigley. Since November 2021 the group has been asking their representative to sign on to a pledge saying he will refuse campaign contributions from the top five weapons companies—Lockheed Martin, Raytheon, Boeing, General Dynamics, and Northrop Grumman. On August 19th, the group launched their DivestMike Petitioncalling on Quigley to meet their demand, which has gathered 162 signatures from IL-5 constituents as of today.

The group submitted two questions for approval. When the first was dismissed, the group then offered the following:

“Due to the environmental destruction and humanitarian impacts of weapons made by Lockheed Martin, Raytheon, General Dynamics, and Boeing, would you be willing to consider refusing further campaign contributions from those companies?"

However, this was denied as well.

“Hopefully the group understands the strict firewall we want to keep between our official work and the campaign,” said the Quigley for Congress Campaign via email to Chairman Frances O’Kennard of the Northside AARP Community group. “The way the question is framed seems to relate to the campaign/unofficial side. Since Congressman Quigley is coming in his official capacity, we would not be able to facilitate any questions related to the campaign due to federal ethics rules.”

“We offered questions related to how campaign financing reflects on policy issues and our representatives’ ethics just as much as their votes and proposals,” she said. “I would like to get more information on the ‘federal ethics rules’ being referred to, as it just doesn’t make sense to me how Rep. Quigley must treat campaign financing as distinct from official policy-related business.”

A question suggested by the Northside AARP Community Group’s program committee member was accepted in place of the DivestMike group’s proposal.

“It was a very watered down version of what we intended to ask,” de la Torre said.

“What can we do to make our elections more transparent, especially in terms of who is financing election campaigns and how much does that influence your and other lawmakers’ positions on issues?”

Quigley focused his response specifically on protecting voting access and integrity, and did not speak at all to the question of campaign finance. Toward the end of the meeting, Rep. Quigley spent six minutes of his forty-minute appearance discussing his recent trip to Ukraine and the importance of continuing to provide weapons shipments. After discussing in extreme detail the violence against Ukrainians in Bucha, he stated that “Right now, weaponry is humanitarian aid.”

“The US ally Saudi Arabia has used bombs provided by the billion-dollar US weapons companies to kill children and destroy water treatment facilities in Yemen, which caused a cholera epidemic,” David Phelps of DivestMike said. “Those weapons are not humanitarian aid. This is why our representatives should not be taking campaign donations from weapons companies.”

Following the meeting, Rep. Quigley quickly stepped out and biked away before DivestMike members were able to ask further questions. An AARP lead member directed participants to email or call Rep. Quigley’s office for further inquiry. The DivestMike campaign has been using these avenues to contact the representative for 10 months to no avail. DivestMike members communicated that they are committed to getting in touch with Quigley to ultimately put a stop to his war profiteering.

“Targeting Rep. Quigley is important because we need him to be a leader for ethical campaign financing, so that other legislators are pushed to dismiss the lobbying efforts of our multi-billion-dollar arms industry,” de la Torre said.