CODEPINK rejects attempted coup against Brazil’s democracy! Calls for Bolsonaro to be sent back to Brazil

CODEPINK rejects attempted coup against Brazil’s democracy!
Calls for Bolsonaro to be sent back to Brazil

CODEPINK is appalled and outraged at the attempted coup in Brazil that took place on January 8 by supporters of former president Jair Bolsonaro.

Emulating the January 6 U.S. Capitol attack, fascist and extreme-right groups stormed Brazil’s Congress, Supreme Court and presidential offices to subvert the constitutional order and call for a military intervention. The damage is much greater than the destruction in Washington on January 6th. Journalists compared the scenes at the government buildings in the capital to a war zone.

President Lula announced a federal security intervention in Brasilia and by evening, security forces had managed to retake the capital buildings. Lula has vowed to punish all those involved in the riots, and to investigate the security forces for "incompetence, bad faith or malice" in their failure to stop the demonstrators. Lula accused Bolsonaro of encouraging the uprising, just as Donald Trump has been accused of encouraging the January 6 uprising in the U.S. Congress.

Two days before President Lula assumed office, former President Jair Bolsonaro flew to Florida. Anderson Torres, Bolsonaro’s Justice Minister who was appointed Minister of Public Security for the capital city Brasilia, is also in the United States. Torres did nothing to deter yesterday’s violence actions from taking place and for months, Bolsonaro has been laying the groundwork for such a coup attempt with his false claims of election fraud.

Rep. Alexandria Ocasio Cortez and Rep. Joaquin Castro have called for the U.S. to cease granting refuge to Bolsonaro in Florida. CODEPINK joins their calls. Bolsonaro and Torres should be sent back to Brazil to face justice for their crimes.

While Brazil’s elected government and its people are anxious to rebuild a country that was seriously damaged by the unbridled neoliberal policies of the Bolsonaro government, the anti-democratic and violent mobs ignored the sovereign will of the Brazilian people who elected President Luis Inácio Lula da Silva to a new constitutional mandate. CODEPINK vehemently rejects these threats to the social and political peace of the Brazilian people, and stands firmly with the elected government of President Lula. 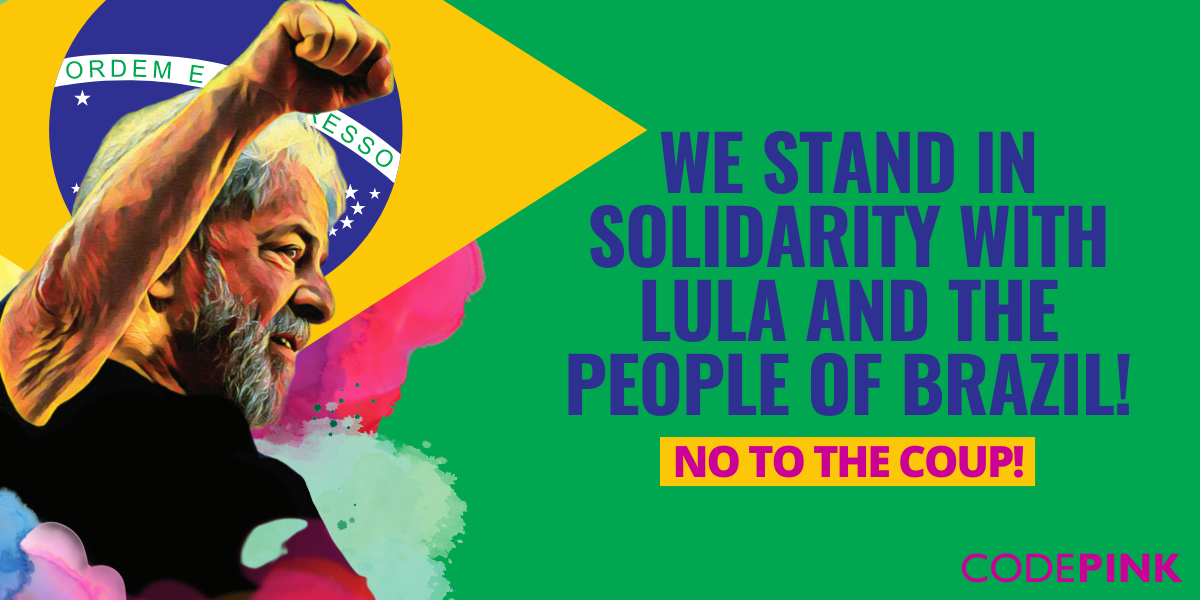