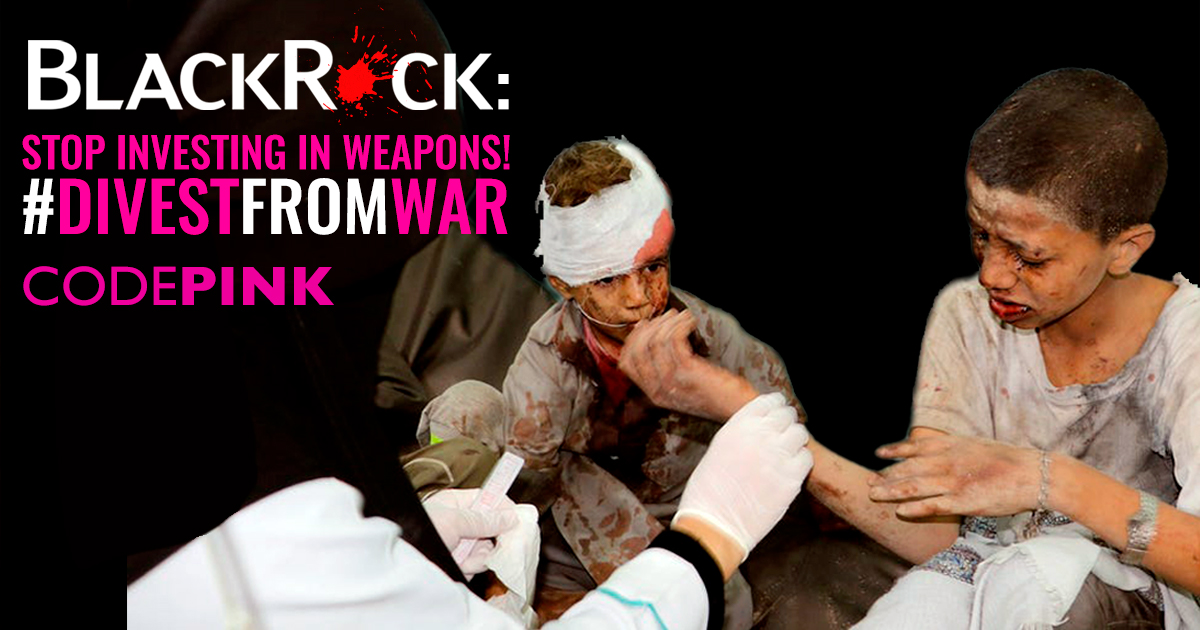 Dozens of small children were packed into a school bus, coming back from a soccer trip in Yemen. Moments later, Saudi Arabia bombed the bus and killed 40 of those innocent children.

The bomb was made by the mega weapons manufacturer, Lockheed Martin.

One of their investors happens to be BlackRock. Recently BlackRock has been trying to improve their image as seeming “socially responsible.” If we ramp up massive pressure and blow the whistle on their deadly investments, we could make divesting from the war machine a key agenda item for Blackrock’s shareholder meeting in 3 weeks.

CODEPINK is a shareholder in BlackRock which gives us leverage. But this will only work if thousands of people have our back. Add your name to call on BlackRock to divest from the war machine, and CODEPINK will pull out all the stops to make sure BlackRock execs hear our call:

BlackRock could do this. They recently announced that they were divesting from fossil fuels — signaling a serious shift in their policies. If CEO Larry Fink is serious about seeming like a socially responsible game-changer for humanity -- he should also divest from weapons.

Plus, compared to BlackRock’s other investments, their weapons portfolio is not even that significant!

But if BlackRock does this, it could be the first major domino we need to get other investment companies on board too. The shareholder meeting is just 3 weeks away, so we have no time to lose. Sign the petition and share this widely!

If there is one thing our community stands for, it is peace. And one major way we can help achieve that is by cutting off the flow of cash into the weapons industry. So, let us come together to make that happen, and help prevent more innocent children from being killed with these senseless tools of war.

P.S. Join us at two upcoming Divest from War Webinars:

On Saturday, May 9 at 12 PM ET, join Medea Benjamin, Dr. Cornel West, and Jeremy Scahill for a conversation on disarmament and divestment during COVID-19

On Tuesday, May 12 at 8 PM ET, join CODEPINK and World Beyond War for our Divesting Universities Webinar