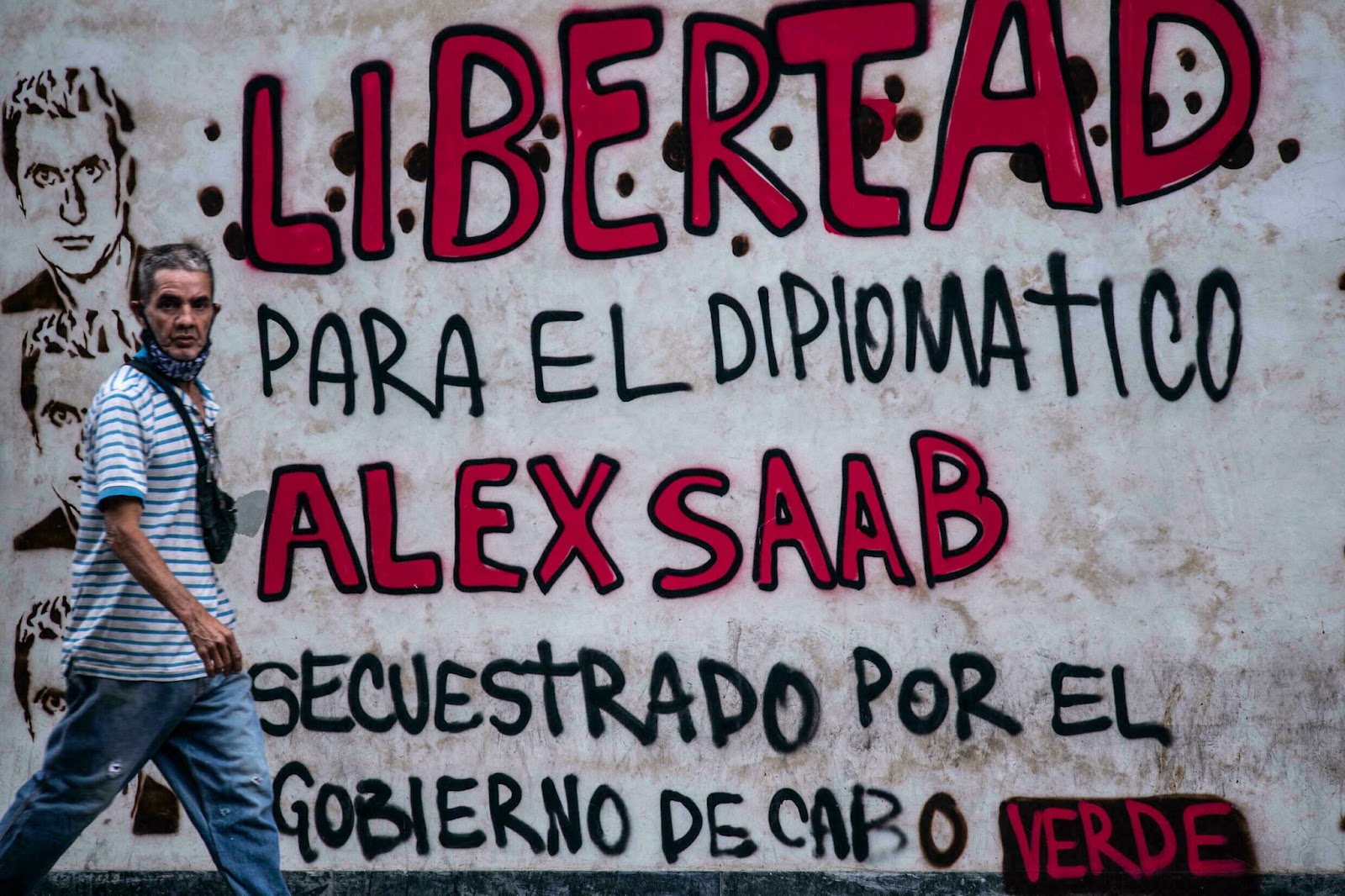 The talks between the Venezuelan government and the extreme-right wing opposition had been going well. There are still outstanding issues to be resolved, like ending the economic war, but the discussions held in Mexico led to concrete electoral developments. The European Union agreed to send an electoral observation mission. The United Nations decided to send a panel of electoral experts. (Both institutions refused to observe the 2018 presidential and 2020 legislative elections, despite invitations from the government.) Thousands of opposition candidates registered to run in the mega-elections, which include voting for governors and mayors, as regional and local legislators.

On October 16, the U.S. extradited Venezuelan diplomat Alex Saab from Cape Verde. Before getting into why this relates to the dialogue, it’s worth highlighting a few facts about the case.

Saab was named a diplomat in April 2018. His arrest violates the Vienna Convention and is illegal. It will surprise no one that the U.S. insists on diplomatic immunity for its own people, but routinely disrespects these rights for Latin American countries. In addition to Saab, there’s been their attempted assassination of Assange in the Ecuadoran embassy in London and the seizure of the Venezuelan embassy in D.C.

Saab’s June 2020 arrest took place a day before an Interpol red notice was issued; the notice was used to justify his arrest after the fact. This is one of the reasons why the Economic Community of West African States issued a binding decision calling for Saab’s release. In a letter, Saab denounced being “tortured to testify against Nicolás Maduro and sign my voluntary extradition to the United States.” His extradition came as he had a pending case in the U.S. Court of Appeals for the 11th Circuit; his hearing was postponed three times by the U.S. Attorney’s Office of Miami. 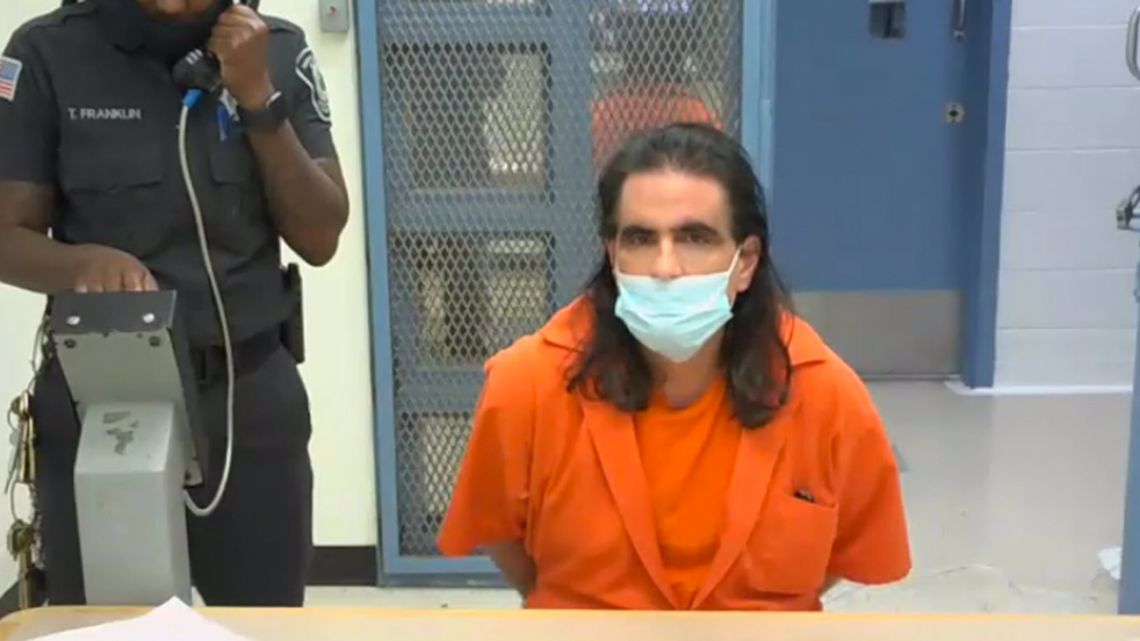 Alex Saab, pictured while in US custody | Image leaked onto social networks

Saab was extradited without the knowledge of his lawyers or family. His wife considers it a kidnapping. The extradition occurred one day before elections in Cape Verde. The winning candidate had previously said he would release Saab. During his time in Cape Verde, the U.S. sent the Cape Verde government $1.5 million in pandemic economic relief aid and announced plans for a new $400 million embassy, of which $100 million would go directly into Cape Verde’s economy.

The charges against Saab allege corruption in Venezuela’s premiere social programs. The Great Housing Mission has delivered 3.7 million homes for working class Venezuelans, the majority of those built under sanctions. Saab himself was sanctioned by the U.S. in 2019 for alleged corruption in the CLAP program, which delivers food and other necessities to 7 million Venezuelan families every month in a country of 30 million people.

He was detained by Cape Verde on a refueling stopover. He was headed to Iran to broker a trade deal that would bring fuel, food and medicine to Venezuela. Saab is one of the architects of Venezuela’s capacity for overcoming U.S. sanctions. The U.S. government wants him in order to destroy this capacity and make Venezuelans even more desperate.

The  opposition knew that any attempt to extradite Saab would threaten the talks, and apparently, the U.S. government had assured them they would not take the step. After his extradition, the Venezuelan government suspended the talks. This led to a predictable response by the media and D.C. think tanks that blamed President Maduro for the suspension.

This sort of hypocrisy is also evident in the case of the six Citgo oil executives currently jailed in Venezuela on corruption charges. All six are Venezuelan-born citizens, though five have dual citizenship with the U.S. and one has a green card. Most media coverage identifies them all as U.S. citizens, perhaps to create the impression that they’ve somehow been kidnapped.

In a gesture of goodwill earlier this year, the Venezuelan government granted them house arrest. As a response to the extradition of Saab, they have now been returned to prison. The U.S. continually advocates for their release, despite the serious charges of corruption.

Similar treatment is offered to former Oil Minister Rafael Ramírez, who is wanted in Venezuela for corruption after seriously harming the country’s oil industry. Ramírez is currently in Italy, a NATO country that refuses to extradite him to Venezuela. 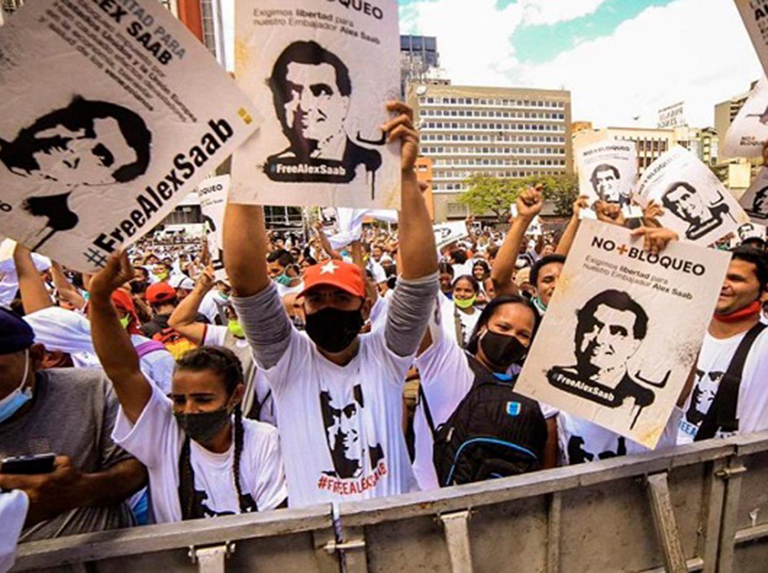 Rally in Caracas against Saab's extradition

The Saab extradition wasn’t the Biden administration’s only attempt to sabotage the dialogue. Gone virtually unreported in the media is the fact that the U.S. Treasury Department is blocking Venezuela from accessing what’s known as Special Drawing Rights (SDRs), a sort of international currency issued by the International Monetary Fund (IMF).

Approved in August after a year-long delay due to objections by the Trump administration, the issuance of SDRs is meant to address the economic consequences of the pandemic. Hundreds of organizations, including CODEPINK, endorsed this issuance that would allow countries like Venezuela “to import items they need to address the pandemic, such as food, medicine …  and medical devices.”

But as is the case with Afghanistan, the IMF has blocked Venezuela from accessing its $5 billion in SDRs. It is understood that the Biden administration is behind this decision. This de facto sanction has gone virtually unreported by mainstream media, despite repeated denunciations by the Maduro government. Again, this decision to block Venezuela’s SDRs was taken by the U.S. during the ongoing talks.

To add insult to injury, the Treasury Department released a cringeworthy sanctions “review” on October 18. This review was meant to address the impact of sanctions on the global response to the pandemic. Instead, it offered a plan to strengthen the effectiveness of sanctions, while ignoring the calamitous effect it has on civilians. This review has been denounced by several advocacy groups, including the Sanctions Kill coalition, of which CODEPINK is a part.

The future of the dialogue

Even if the dialogue between the Venezuelan government and extreme right-wing opposition is completely canceled rather than just suspended, the electoral guarantees would likely remain in place. The Maduro government has done a lot to bring the more moderate opposition to the table, and many of their leaders have publicly broken with the Guaidó faction. Moreover, Venezuela is unlikely to do anything else that might threaten the participation of the UN and EU in the elections.

At this point it’s unclear what can save the dialogue. There has been media speculation about a possible exchange of Alex Saab for the Citgo 6. Family members of the Citgo 6 recently sent a letter to President Biden criticizing the U.S. government for not negotiating directly with Venezuela. An offer like this might not be enough to get the Maduro government back to the table, which rightly sees the case of the Citgo 6 as being lawful, and the extradition of Saab as illegal and politically motivated. And it’s unlikely that the Biden administration would offer this in the first place; if that deal had been available, it would likely have happened before Saab’s extradition.

Families of 9 Americans jailed in Venezuela send letter to @JoeBiden

“We are frustrated by the lack of action... Those in-charge of returning wrongfully detained Americans have not even taken the basic first step of directly engaging with the Venezuelans holding our loved ones.” pic.twitter.com/VIj3UG02ht

The Biden administration seemingly has little interest in preserving the dialogue and it remains an open question whether anyone in Congress will challenge this reckless continuation of Trump’s policies. The Venezuelan people deserve better than another administration sabotaging a dialogue and imposing more deadly sanctions.