Last week, on February 24, I woke up to find that Twitter had suspended my account. Why? I have no idea, as Twitter has not provided me with any information despite my multiple appeals for an explanation and time frame for when my account will be reinstated/unsuspended.

Join CODEPINK’s letter to Twitter telling them to reinstate @ArielElyseGold and to stop targeting Palestinian rights activists and all those who work to end war. Engaging in peaceful political dissent should not be a crime.

This didn’t happen out of the blue. I am known on Twitter as an outspoken opponent of Israeli apartheid, a feminist who opposes all forms of racism, including antisemitism, and works to get the U.S. back into the Iran Nuclear Deal and end weapons sales to Saudi Arabia and the UAE.

For the past month, Twitter has been flagging my tweets and CODEPINK’s tweets for violating their rules. But what rules we have violated is mystifying. Below are a few of the tweet “violations” they flagged between January 30th and February 24th. 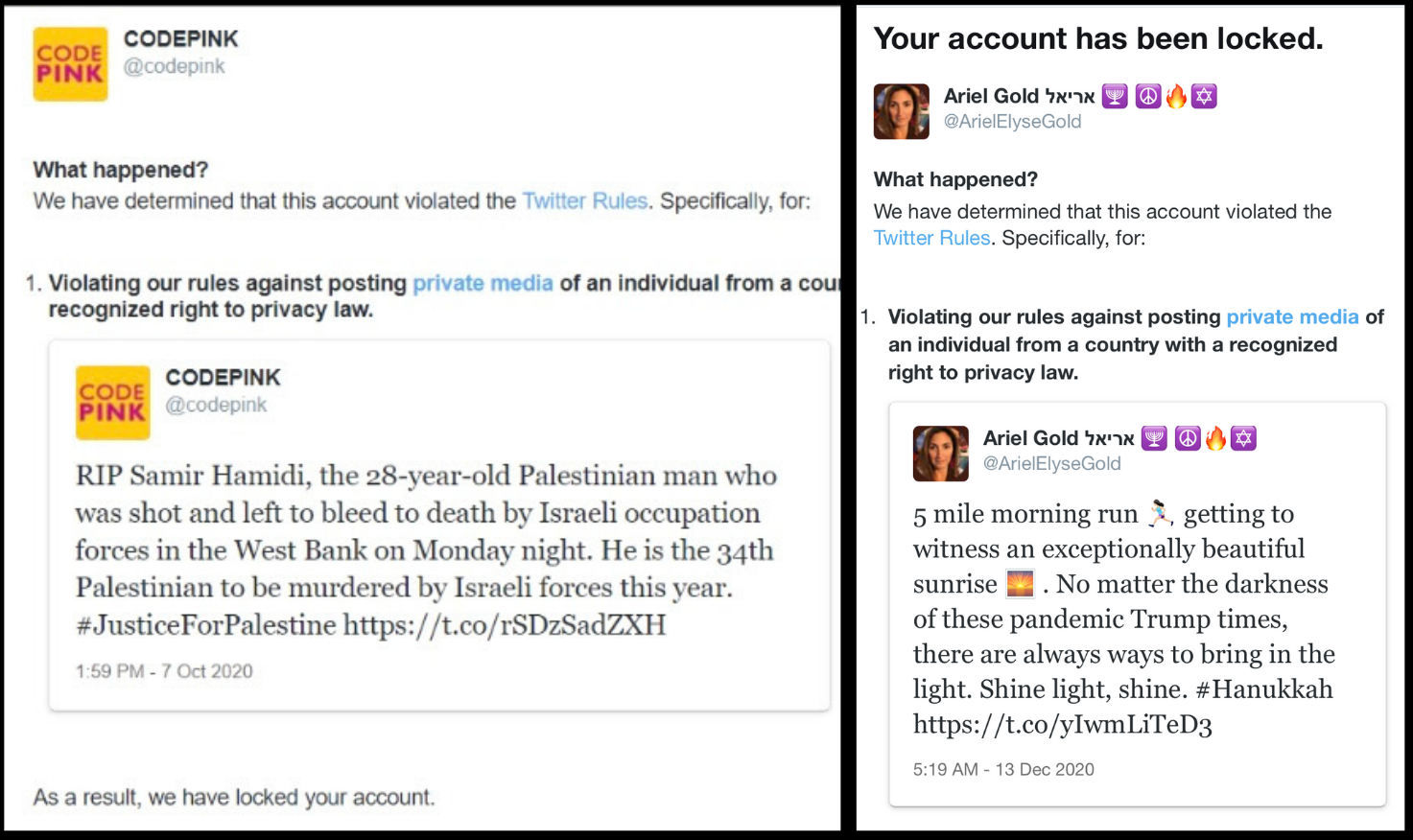 See all the details and flagged tweets here.

It’s not just CODEPINK: On February 23, 373 Twitter accounts associated with Armenia, Russia, and Iran were suspended. According to Twitter, a number of these account suspensions were for “undermining faith in the NATO alliance and its stability.”

I’m proud of CODEPINK’s opposition to NATO and work to end sanctions. No Twitter suspension will stop me from calling out Israeli vaccine apartheid or the danger Netanyahu puts all Jews in when he falsely accuses the International Criminal Court of being antisemitic. And I also won’t sit by quietly as Twitter cracks down on peaceful activists and silences free speech.

I have long been targeted on Twitter — sometimes with hate speech or threats of violence — by defenders of Israel’s status quo. Through Twitter, email, and snail-mail, I have even received death threats that had to be reported to the FBI. But, I refuse to be intimidated or silenced. Sign the petition now telling Twitter to reinstate my account and stop targeting me and the rest of the CODEPINK team.