Twitter: Reinstate @ArielElyseGold. Supporting Palestinian Rights is Not a Crime

On August 22, 2021, Twitter suspended the account of CODEPINK National Co-director Ariel Gold, an outspoken feminist advocate for Palestinian rights and an end to U.S. militarism. This is the second time Twitter suspended Ariel's account for no reason. 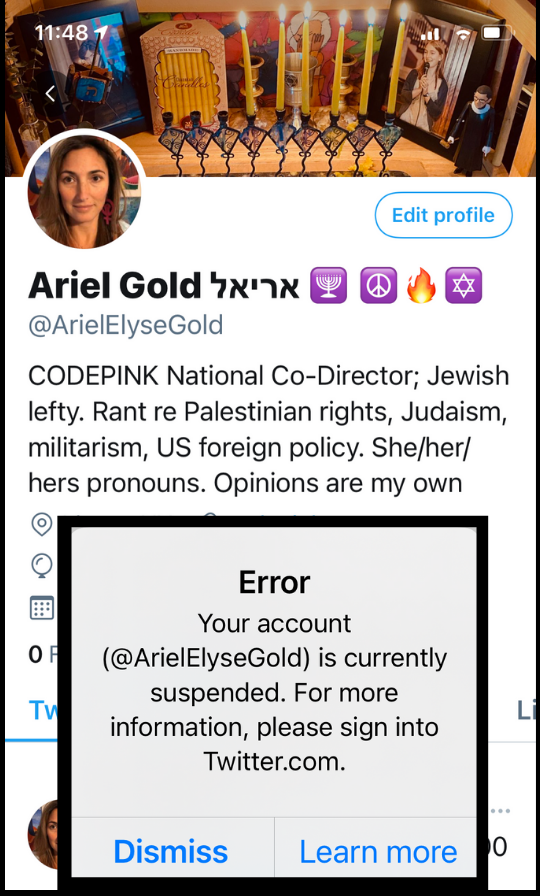 We the undersigned ask you to reinstate/unsuspend the Twitter account of Ariel Gold (@ArielElyseGold), the national co-director of CODEPINK, who on August 22, 2021, found her Twitter account suspended. No explanation has been provided from you as to why her account was suspended or when it will be reinstated/unsuspended.

In addition to reinstating/unsuspending Ariel Gold’s account, we call on you to cease targeting CODEPINK and its staff for false violations. We ask you to stop targeting peace advocates and to cease censorship of peaceful political dissent.

About CODEPINK and Ariel Gold:

Please reinstate/unsuspend the Twitter account of Ariel Gold (@ArielElyseGold), cease targeting CODEPINK and its staff for false violations, stop targeting anti-war activists. Engaging in peaceful political dissent should not be a crime.