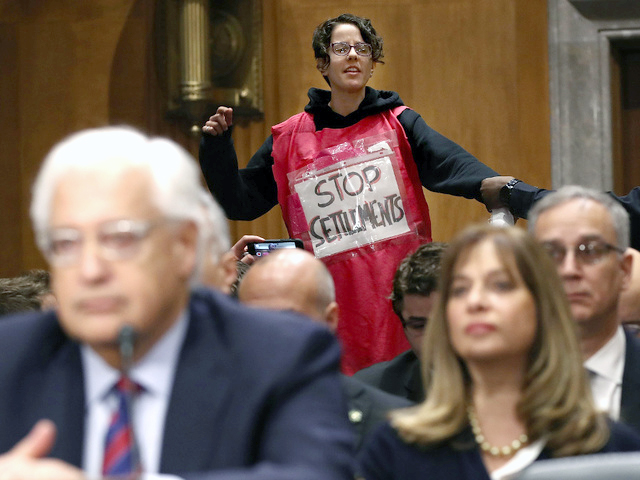 I oppose David Friedman because he's directly insulted me, my family, and community in his vitriolic comments about progressive Jews. I reject Friedman because every year I visit Palestine and see that the Jewish-only settlements have increased in both number and size, stealing more and more land from Palestinians, in part due to the financial and political support from Friedman." —Tali Ruskin, CODEPINKer causing disruption during David Friedman's Senate hearing.

Two weeks ago we disrupted David Friedman’s confirmation hearing to be the next U.S. ambassador. Friedman has raised millions of dollars for Israel’s illegal settlements and gives a green light for an increase in settler violence. Friedman wants to destroy the Iran nuclear deal, move the U.S. embassy to Jerusalem, and denies that Palestinian refugees exist. He is so right-wing and toxic that he makes Netanyahu look like a liberal centrist!

Sign our petition opposing Friedman! We will be delivering our petition signatures this week along with our partners Jewish Voice for Peace, US Campaign for Palestinian Rights, and others.

Our own Ariel Gold is on the ground right now in Palestine. On Friday she and a group of US Veterans for Peace attended a nonviolent demonstration to end the closure, restriction, and separations in Hebron — the very definition of Israeli apartheid. The Israeli military attacked them with massive force firing tear gas, stun grenades, and more directly at them. Ariel and others suffered so much tear gas inhalation they had assisted out by medics. Sign the petition asking the UN to use all its power and influence to demand Israel end its system of segregation in Hebron.

Prior to the protest in Hebron, Issa Amro of Youth Against Settlement organized an action of shoe throwing at a large picture of Donald Trump to show their disrespect for the racism and hatred he espouses, including his pick of David Friedman to be US ambassador to Israel. They received wide media coverage for their action.

We will continue to resist hatred, racism, and militarism, from David Friedman to Donald Trump to the Israeli occupation of Palestine.

Towards equality and freedom for all!
Ann, Ariel, Jodie, Medea, Nancy, Paki, Tali, and the entire CODEPINK team

P.S. Check out our new I Love Palestinian Human Rights T-shirts and join us in Washington D.C. March 26-28 to Shut Down AIPAC!