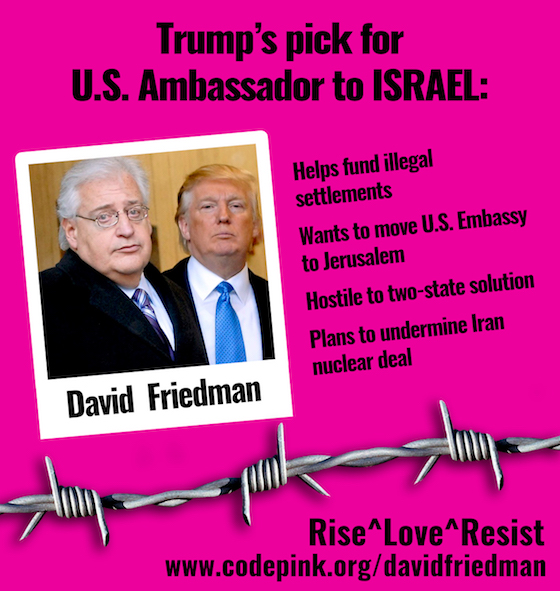 As an Jewish American and a Palestinian human rights activist, we stand united in our opposition to President Donald Trump’s nomination of bankruptcy attorney David Friedman to be the next U.S. Ambassador to Israel. Friedman, who has no diplomatic experience, is aligned not with American Jewish positions, but with Israel’s illegal settler movement. He is hostile to the two-state solution and refers to the West Bank as Judea and Sumeria, a biblical name used by settlers and Israel’s extreme right. Friedman’s reference to the West Bank by this name reflects his support for Israeli annexation of the West Bank, which would force the Palestinian population either to leave or be contained in enclaves, not unlike South African apartheid era bantustans.

Friedman’s appointment would signal a break with decades of U.S. foreign policy criticizing settlement expansion and maintaining at least the appearance of support for a just and peaceful solution to the conflict (U.S. military aid to Israel, which the Obama administration just increased to 38 billion over the next ten years, has always acted counter to peaceful resolution). Friedman has made clear that he intends to move the U.S. embassy to Jerusalem, an action that would fly in the face of international law and the positions of European allies. He heads up an organization that has raised tens of billion of dollars for the illegal settlement of Bet El, located outside of Ramallah. This is out of step even with the Trump administration who stated that the construction of new settlements or the expansion of existing settlements beyond their current borders may not be helpful in achieving [peace]. Friedman has stated that supporters of the liberal Jewish organization J Street, are worse than “kapos,” Jewish prison guards who worked in Nazi death camps.

Unlike Israeli Jews, trends among American Jews show a sharp move away from religious practice and towards secularization, assimilation, and identification with the less religious Union for Reform Judaism movement. These Jews, who make up 65 percent of American Jewry, are less likely than their orthodox counterparts to express blind support for Israel’s policies. While they report emotional attachment to the State of Israel, they tend to disagree with the ideology supported by Friedman that the land of Israel was promised to the Jewish people by God.

In November 2016, Friedman and Jason Dov Greenblatt released a 16-point plan for U.S. relations with Israel under the Trump administration. Along with suggesting that the U.S. “cut off funds for the UN Human Rights Council,” they also portray Iran “as the leading state sponsor of terrorism,” arguing that Iran is in violation of the Joint Comprehensive Plan of Action and calling for the implementation of “tough, new sanctions.” Friedman’s position on Iran, while in alignment with Netanyahu’s wishes, is inconsistent with American Jewish opinion. A 2015 LA Jewish Journal survey found that 48 percent of American Jews support the Iran deal and only 28 percent oppose it (25 percent reported that they hadn’t heard enough to form an opinion).

As a modern Jewish-American woman, I am an example of the changing trends in American Jewry. My grandmother immigrated to the U.S. from Poland as a young child in the early 1900s. Her parents settled in Utica, New York, where they helped establish the local Utica chapter of the Zionist Organization of America in 1938. Our family’s roots stretch back to fourteenth century Jewish scholar and Kabbalist, Joseph Karo, buried in the Northern Israeli town of Safed. I was taught, like most American Jews, that Israel was our protection after centuries of anti-Semitism, culminating in the Holocaust. I joined a Reform synagogue upon reaching adulthood, but my feelings of connection to, and support for, Israel as a Jewish State were shattered with the 2008-2009 assault on Gaza, which killed over 1,400 Palestinians, most of whom were civilians. Horrified that Israel was committing this act in my name, I began to look critically at the history of Zionism, at Israel’s foundation of ethnic cleansing, and at the state’s ongoing violations of international law and Palestinians’ human rights. In the fall of 2016, I spent 6 weeks in Hebron with the Palestinian human rights group, Youth Against Settlements, experiencing directly the most ideologically extreme and violent members Israel’s settler movement.

Incitement to settler violence is at its most extreme in the city of Hebron, but it is commonplace and normalized throughout Israeli society. In October 2016, Israeli Education Minister, Naftali Bennett, who heads up Israel’s rights wing Habayit Hayehudi Party, stated that Israelis should be ready to “give our lives” to annex the West Bank. Friedman’s denunciation of the two-state solution and support for Israeli annexation of the West Bank provides dangerous legitimation for such calls.

As a Palestinian native of Hebron, I know all too well what “giving lives” to annex the West Bank looks like, as well as the consequences that follow. I was 14 years old when Brooklyn-born Israeli settler Baruch Goldstein opened fire in Hebron’s Ibrahimi mosque in 1994, killing 29 Palestinians in worship and injuring another 125. Since then, Hebron has been a divided city. While Israeli settlers roam the streets freely, openly carrying machine guns, Palestinians like myself face movement barriers, closed military zones, 12 permanently staffed checkpoints, and constant harassment. The Youth Against Settlements center, which is also my residence, is regularly invaded by aggressive settlers and soldiers.

Since university, my life’s commitment has been to using nonviolence as a way to campaign for equality, freedom, and an end to Israeli apartheid. In 2010, The Office of the United Nations High Commissioner for Human Rights (OHCHR) declared me the Human Rights Defender of the Year for Palestine. In 2013, the European Union gave me official Human Rights Defender designation. In 2011, I was a guest of the U.S. State Department as part of the International Visitor Leadership Program (IVLP). While I experience immense commendation and support from the International community, at home I face settler death threats and persecution by Israel. Currently, I am undergoing trial in Israeli military court on trumped up charges in an effort to silence my voice and shut down my endeavors. Friedman’s appointment would harm, rather than support, my nonviolent work and would green light an increase in settler violence in Hebron and throughout the West Bank.

More and more American Jews are aligning with the nonviolent movement for Palestinian human rights. Last spring, hundred of American Jews, including prominent Jewish-American journalist and political analyst, Peter Beinart, traveled to the West Bank to stand shoulder to shoulder with Palestinians in Hebron and West Bank village of Susiya. They faced arrest as they joined their Palestinian counterparts in an attempt to clean out an abandoned Palestinian factory and transform it into a Cinema. This, not support for the Israeli extreme right and settler movement, is the trend of American Jewish opinion on Israel. It is how to support a peaceful solution to the decades old conflict. Peace talks, protection for human rights defenders, and adherence to international law is what the the next U.S. Ambassador to Israel should be supporting and why we are asking you to add your name to CODEPINK’s petition calling on the incoming 116th U.S. Congress not to confirm David Friedman.

Issa Amro is an internationally recognized Palestinian human rights defender from the West Bank city of Hebron. He is the founder and director of the Palestinian led organization, Youth Against Settlements, that documents human rights violations and provides protection and infrastructure for Palestinian families. He has testified before the UN on numerous occasions and received many awards and recognitions for his work. He is currently undergoing trial in Israeli military court. His twitter handle is @issaamro.

Ariel Gold is a staff member of CODEPINK, a women-led grassroots organization working to end U.S. wars and militarism, support peace and human rights initiatives, and redirect our tax dollars into healthcare, education, green jobs and other life-affirming programs. She runs CODEPINK’s Remodel RE/MAX campaign and manages their participation in the Stolen Homes Airbnb campaign and other work for Palestinian human rights. She lives in Ithaca, NY with her two children and is a member of Congregation Tikkun v’Or.

This article was first published December 2016 in Mondoweiss, Huffington Post, and Tikkun Daily. It was titled "Trump’s Pick of Friedman is Out of Step with American Jews and Dangerous for Palestinian Human Rights." It has been updated for events that have occurred since it was originally published. 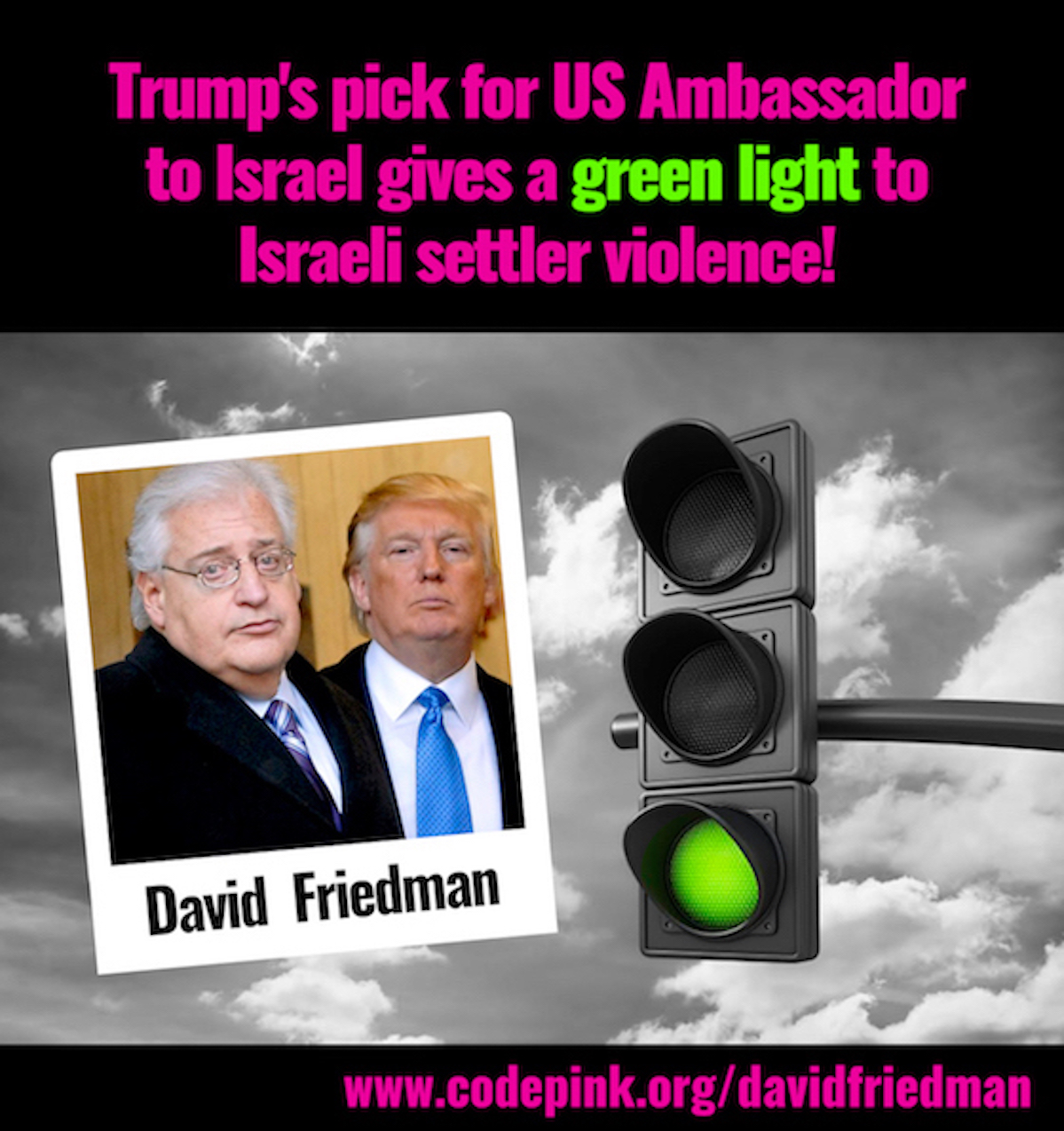