Does CODEPINK support our troops in the military?

What is CODEPINK's Mission? Am I a CODEPINK Member? I'm a man. Can I still be in CODEPINK? If I make a donation to CODEPINK, how is my money used? Does CODEPINK support our troops in the military? What is CODEPINK's stance on nonviolence?
Answer 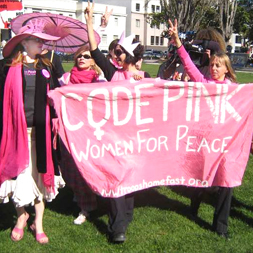 Real support for the troops means bringing them home, taking care of them when they get here, and making sure they do not have to be in harm's way unnecessarily. CODEPINK partners with Iraq Veterans Against the War and Veterans for Peace in our collective work to end the long occupation in Iraq. Additionally we support the work of the Service Women's Action Network, which develops the leadership of female veterans, mentors young women considering military service, and provides and promotes services that are healing to women after their military service experience and especially those who have been raped and traumatized during their service in the military.

Many of our activists and local organizers are military moms and family members, all trying to get their families home safely. While we support our soldiers, we also look forward to a day when the primary way to serve our country is not through violence and killing; when organizations such as AmeriCorps and the Peace Corps take equal priority with the military in advertising and funding.

We support those brave soldiers who refused to fight in Iraq and become war resisters or conscientious objectors, and have cosponsored numerous actions with Courage to Resist and the Canadian War Resisters network. We also call attention to the very serious lack of benefits for our military veterans.

We especially support our National Guard being able to do what they signed up to do--protect us here at home in the case of natural disasters and emergencies, as opposed to fighting and dying abroad in an illegal war. At CODEPINK, we believe the best way we can do this is by speaking out, often in coalition with IVAW, Vets for Peace, Military Families Speak Out, and other organizations.