Am I a CODEPINK Member?

What is CODEPINK's Mission? Am I a CODEPINK Member? I'm a man. Can I still be in CODEPINK? If I make a donation to CODEPINK, how is my money used? Does CODEPINK support our troops in the military? What is CODEPINK's stance on nonviolence?
Answer 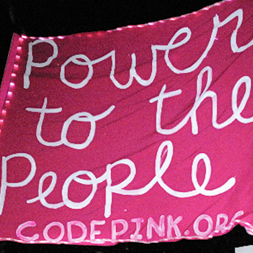 *People includes all people regardless of their gender. Though initiated by women and composed primarily of women, CODEPINK does not discriminate on the basis of gender, sex, ethnicity, age, religion, or social-economic status. (This answer written by CODEPINKOrlando.)