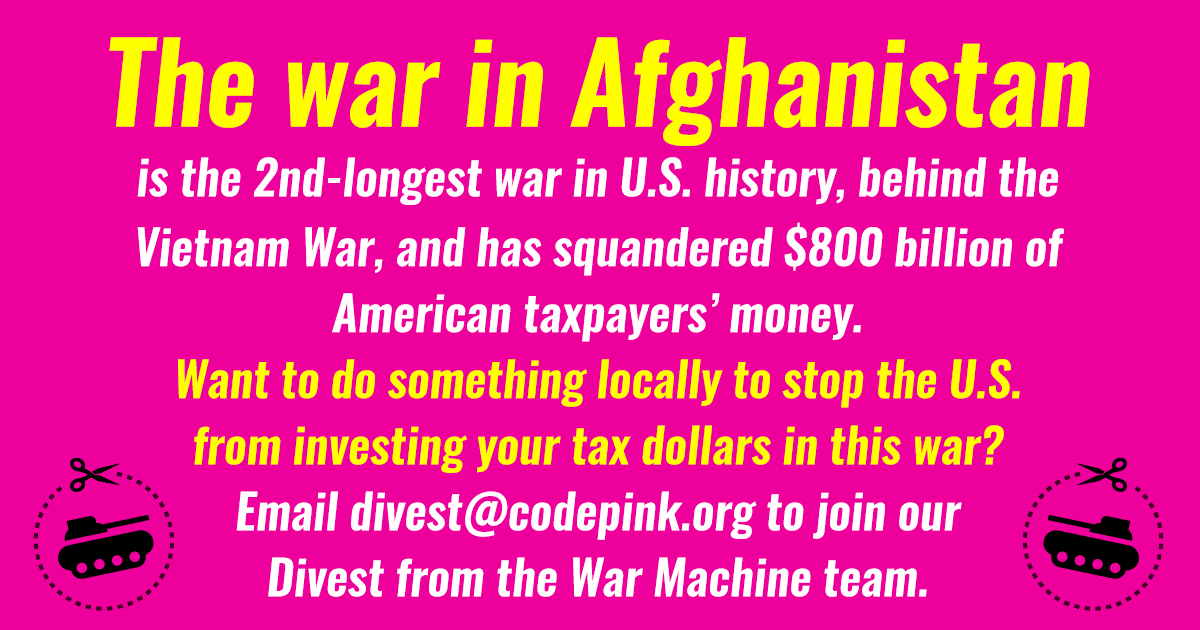 Want to know the meaning of devastation? Seeing United States tax dollars used to fuel war and destruction and increase poverty in countries like Afghanistan. Meanwhile, our communities here in the United States struggle to afford basic services such as health care, education and infrastructure upgrades. It’s been a lose-lose situation for almost 20 years.

The war in Afghanistan—now in its 17th year, it's the second-longest war in U.S. history, behind the Vietnam War—has squandered $800 billion of American taxpayers’ money since it started in 2001.

It’s time to take our tax dollars out of killing and destruction, and #DivestFromWar. We’re launching #Divest campaigns all over the country—email [email protected] to learn how you can start one in your community!

Because the problem is bigger than just wasteful military spending. We now know that the billions of dollars we have promised in aid also are being squandered. John Sopko, the Special Inspector General for Afghanistan Reconstruction (SIGAR), reported to Congress in July that “SIGAR has identified up to $15.5 billion in waste, fraud, and abuse, and failed whole-of-government reconstruction efforts.”

With this much dysfunction, there is no way the United States is meeting the aid commitments we have pledged to Afghans before the international community. Poverty in Afghanistan is more widespread today than before, and lack of access to basic necessities like safe, clean drinking water is still a life-threatening issue.

Where are those billions of U.S. taxpayers dollars going if we’re not improving living conditions for Afghans—conditions we created with our endless war?

We know that Congress isn’t listening—they’re the ones who keep approving all this wasteful spending. But you can do something locally to stop this investing in war. The money fueling the war in Afghanistan is coming from your schools, your churches, your pension plans, your banks. Launch a local #Divest campaign, and demand that the United States stop making a killing on killing. Email [email protected] to join our Divest from the War Machine team.

P.S. Read our latest PinkTank articles on Afghanistan: The Human Cost of War for Afghan Children, In Afghanistan, we need to rethink the institution of war, and Can Afghans convince us that the method of war isn’t effective?