Why is Pelosi supporting Trump’s bid for war? 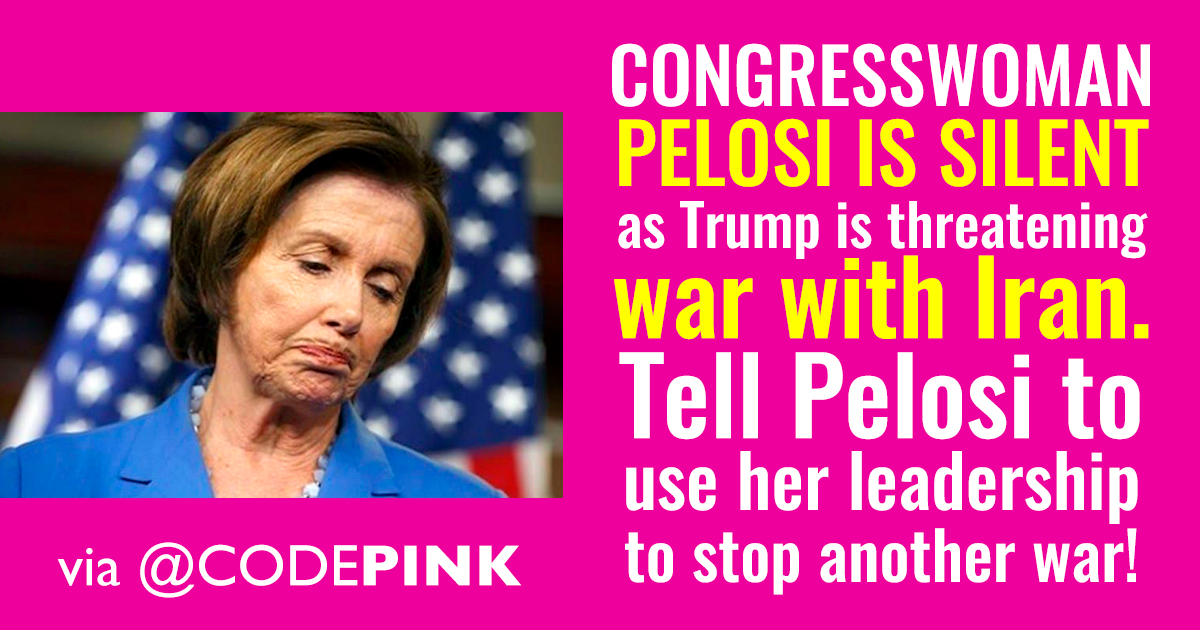 Nancy Pelosi was President Obama’s right-hand woman when it came to rallying Democratic support for the Iran nuclear deal in 2015. She spent the August recess collecting and giving to the White House the names of 57 House Democrats who were wobbling on the deal. Obama called each of them personally to persuade them to support this historic win for diplomacy.

Where is Congresswoman Pelosi now that Trump has shredded the deal, re-imposed sanctions and is taking us down the path to war? Where is her response to Trump’s latest tirade to Iran’s President Rouhani, saying that if he ever threatened the United States, Rouhani would “SUFFER CONSEQUENCES THE LIKES OF WHICH FEW THROUGHOUT HISTORY HAVE EVER SUFFERED BEFORE.” Tell Nancy Pelosi not to be Missing In Action as we head towards a war with Iran. Tell her to organize her party to stop the Trump administration from imposing more sanctions and leading us into war.

Pelosi is not just MIA; she has refused to distance herself from Donald Trump and his bombastic National Security Advisor John Bolton in their support for the terrorist group MEK. The MEK fought alongside Saddam Hussein during the Iraqi invasion of Iran, has assassinated American and Iranian civilians, and has no popular support in Iran.

There is no other way to say it: the path we are on is leading straight to war. In 2015 Pelosi and other Democrats went to bat to support a nuclear deal that was a great win for diplomacy. Now that the deal has been destroyed and a calamity is in the making, they are nowhere to be found. Join us in telling Nancy Pelosi to do her job as a leader of the Democrats and keep us out of war with Iran.