Why are Trump and Modi BFFs? 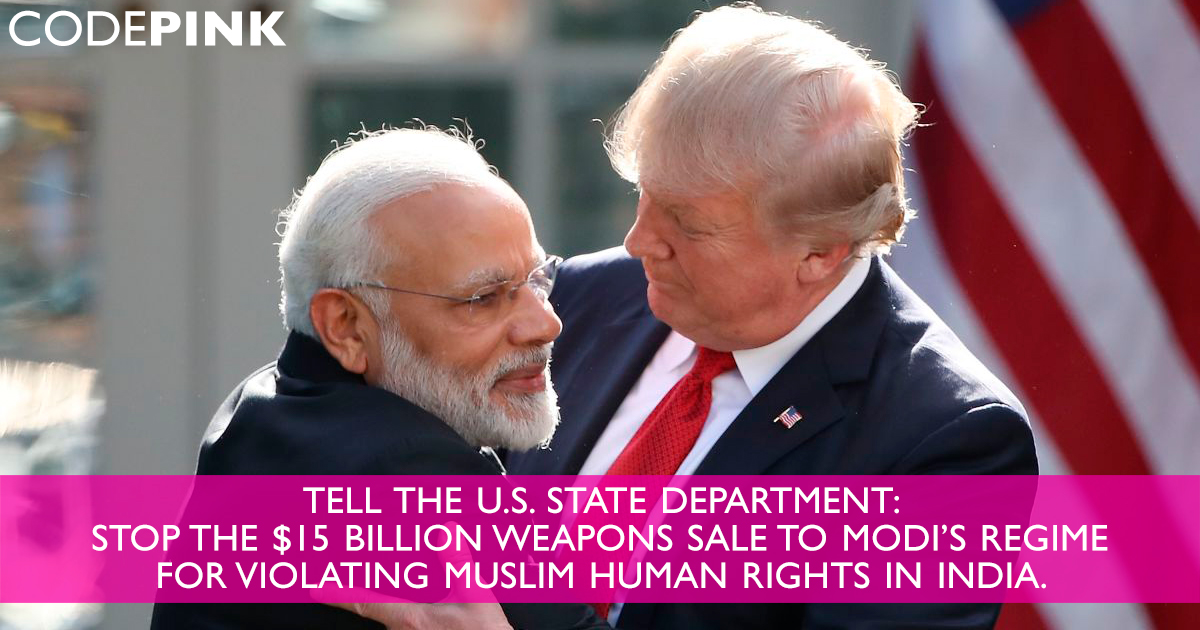 Donald Trump’s recent diplomatic trip to India was a study in contrasts: while he met with world leaders and was lavished with beautiful parties, Muslims were being killed in the streets of New Delhi for asserting their basic human rights. Trump refused to acknowledge the horror as it unfolded around him and even went so far as to claim India's Prime Minister Narendra Modi was a champion for “religious freedom.” We know that Donald Trump will do nothing to hold his best friend Narendra Modi to account for the shocking human rights abuses being perpetrated by the Modi regime from Kashmir to New Delhi—which is why it’s so alarming that Boeing and Raytheon are reportedly competing to sell over $15 billion in weapons to India.

But did you know that the State Department — which is responsible for approving weapons sales to foreign countries — has a policy against selling weapons to human rights abusers?

Arms sales and defense trade are key tools of foreign policy with potential long-term implications for regional security. For this reason, the United States takes into account political, military, economic, arms control, and human rights conditions in making decisions on the provision of military equipment and the licensing of direct commercial sales to any country.

Tell the State Department: Don’t approve $15 billion in weapons sales to Modi’s repressive regime. In light of very serious human rights abuses in India, including but not limited to: the continued murderous attacks on Muslims, the military occupation of Kashmir, and the Indian citizenship law that excludes Muslims and violates international law, the State Department should abide by its own policy and deny $15 billion in weapons sales to India. Companies like Boeing and Raytheon should not be allowed to rake in enormous profit by selling weapons to a regime that’s shown callous disregard for human rights.

The American people are fed up with a State Department that prioritizes lining the pockets of weapons manufacturers over diplomacy and human rights. Join us in telling them to deny $15 billion in weapons sales to Modi’s repressive regime. The State Department should not be in the business of making a killing on killing. It’s time they place human rights and diplomacy above corporate profit.

People over profit,
Carley and the entire Divest from the War Machine team