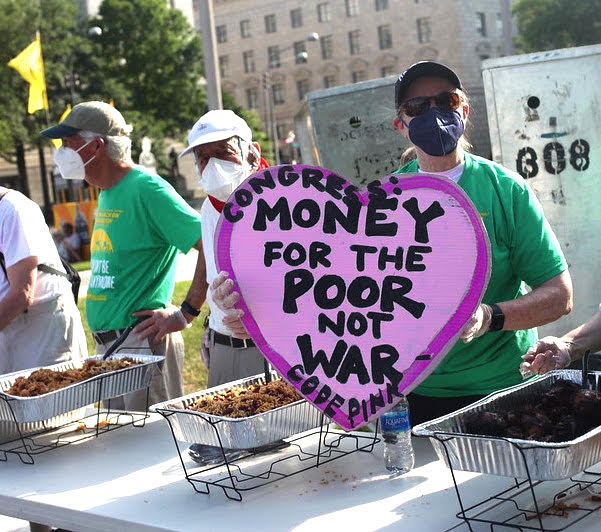 -550,000+ unhoused people in the U.S.
-1 in 10 adults in “significant” medical debt
-$195 billion in medical debt held by individuals
-16.9 % child poverty rate
-63% of people in the US living paycheck to paycheck
-65% of our discretionary dollars go to the militarized budget

And this week, the people who represent you in Congress will vote on the largest military budget in the country’s history. While their constituents live paycheck to paycheck and drown in debt, they will award the Pentagon $847 billion, over half of which will go to private companies.

Tell your Senators to vote NO on the Pentagon budget!

Budgets like this are moral documents. What this “defense” budget is saying to every person in this country is that the people in power do not care about us. They do not have the same interests as us. They would rather give almost a trillion dollars to death and destruction than meet the needs of the people.

War only seems like common sense to the people who get rich from legislating it. Members of Congress invest in weapons companies, and their campaigns are funded by those companies too! That’s why they vote for arms deals, war assistance, and massive Pentagon budgets. Not because they have a deep-seated interest in protecting people. We know war does not protect people and the planet.

Tell your Senators to invest in the people, not war!

Common sense is addressing the climate crisis. It’s investing in infrastructure and education. It’s giving people free healthcare so our illnesses can’t be turned around for profit. It’s forgiving student and medical debt. It’s making sure everyone has a roof over their head. Never let someone who trades war stocks tell you an arms sale or buying another F-35 fighter jet  is in your interest. The people know what we want, and it’s not endless war.

P.S. Join our webinar on 12/14 at 2PM ET with Meera Shah from Palestine Legal to discuss the impacts of anti-BDS legislation!