What did Trump's #SOTU speech really tell us? 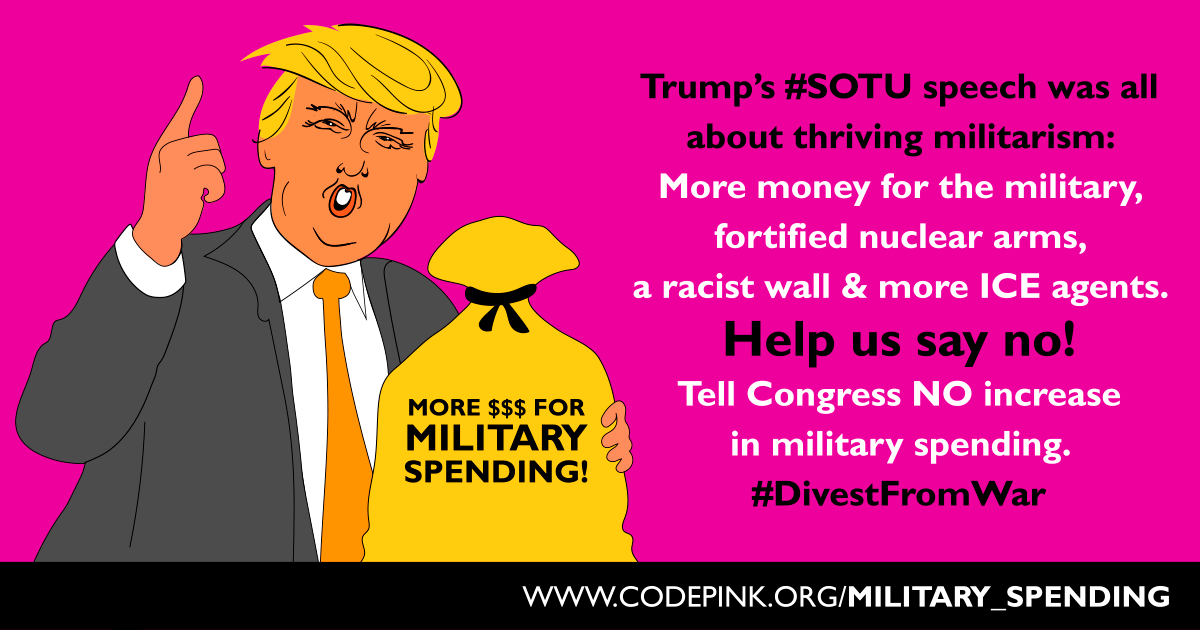 Last night Donald Trump gave his first State of the Union address. He spoke about an America that thrives on militarism: the US nuclear arsenal will be fortified, Guantanamo prison will remain open and the racist wall on the US southern border will be completed. More ICE agents and border guards will be hired — all to divide families and people.

For the 2019 budget, Trump plans to ask for $716 billion for the military. We say no to Trump’s vision to further militarize our country and no to increased military spending. Tell Congress to oppose lifting the sequester for the military budget so Trump can’t give even more of our tax dollars to war.

Last night Trump spoke about China and Russia as dangerous rivals. He called for increased pressure on North Korea. “Past experience has taught us that complacency and concessions only invite aggression and provocation,” he said. But we have watched Trump’s reckless and hard-line bullying tactics over the past year. They have made us less safe and brought us further away from peace. We know that diplomacy, not militarism, is what can bring us closer to peace.

Trump’s planned military budget for 2019 would be a 13% increase from last year.  We should be cutting the military budget, not increasing it. Send a message to Congress asking them to oppose lifting the sequester. Tell them not to let Trump give even more of our tax dollars to the military.

The State of the Union address Trump gave last night is not the country we want to live in. We want our government to use diplomacy, not militarism, violence, and war.  Instead of increasing military spending and bankrolling weapons companies, we should cut the military budget and use our money for human needs at home and abroad.