Webinar on Iran: Are you available this Sunday? 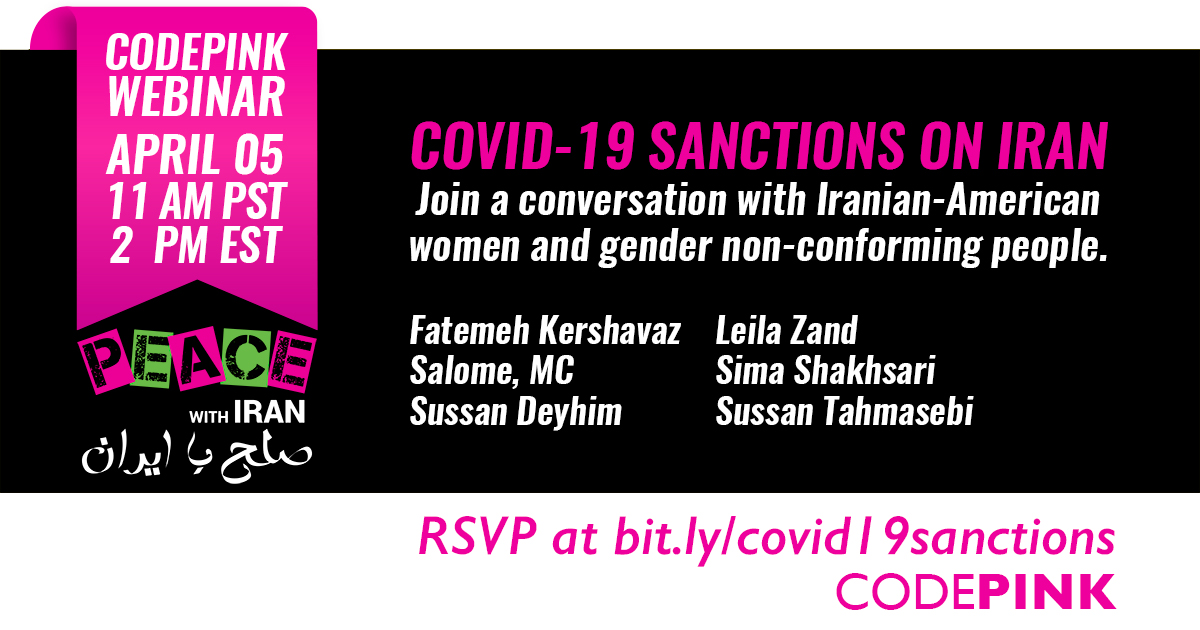 This is a note to thank you for helping Iran — the appeals you have made have gotten AOC, Sanders, and others in Congress to act, demanding the COVID19 sanctions on Iran be lifted.

We are grateful that Alexandria Ocasio-Cortez, Bernie Sanders, Elizabeth Warren, Ilhan Omar, Ayanna Pressley and more — around 30 Senators and Representatives in Congress — just sent a letter to Trump calling on the U.S. to ease its crippling sanctions on Iran — at least 2,600 Iranians have died already from COVID19. The U.S. must offer humanitarian aid to Iran, rather than making a very bad situation worse, the Congressmembers pleaded.

We’d like to invite you to an opportunity to hear directly from Iranian Americans about how this crisis is affecting their families and what we can do. Join us this Sunday, April 5 at 2 PM EST (11 AM Pacific) to hear from six wonderful Iranian-American women and gender non-conforming people.

Our own Leila Zand, the CODEPINK director of citizen diplomacy with Iran will be joined by:

Leila, Sussan, Fatemeh, Salome, Sima, and Sussan will talk about the crisis in Iran from a more personal view: their connections to the nation, how this has affected their loved ones back home, how Iranians — the people and the government — are reacting; about the sanctions that are crippling Iran’s healthcare system; and suggestions they have for what people can do. You will have the option to join either as a participant via Zoom or by watching it live on CODEPINK’s YouTube channel.

We must keep the pressure up because rather than the Trump administration indicating that it will cease, or temporarily suspend, the sanctions on Iran, last week they imposed new additional sanctions on Tehran, this time targeting individuals and companies allegedly linked to the Islamic Revolutionary Guard Corps.

Call the Treasury Department to echo the letter AOC-Sanders letter: SANCTIONS ON IRAN MUST BE LIFTED.

“Rather than continue to invoke new sanctions in the Iranian people’s hour of need,” the letter from AOC, Sanders and others read, “we urge you to substantially suspend sanctions on Iran during this global public health emergency in a humanitarian gesture to the Iranian people to better enable them to fight the virus.”

Even the Bush administration eased sanctions on Iran and gave aid after a deadly earthquake hit the country in 2003. It’s shameful that the Trump administration is increasing, rather than lifting, sanctions right now. As you sit at home, you can use your time to call the Treasury Department and back up the Congressional letter.