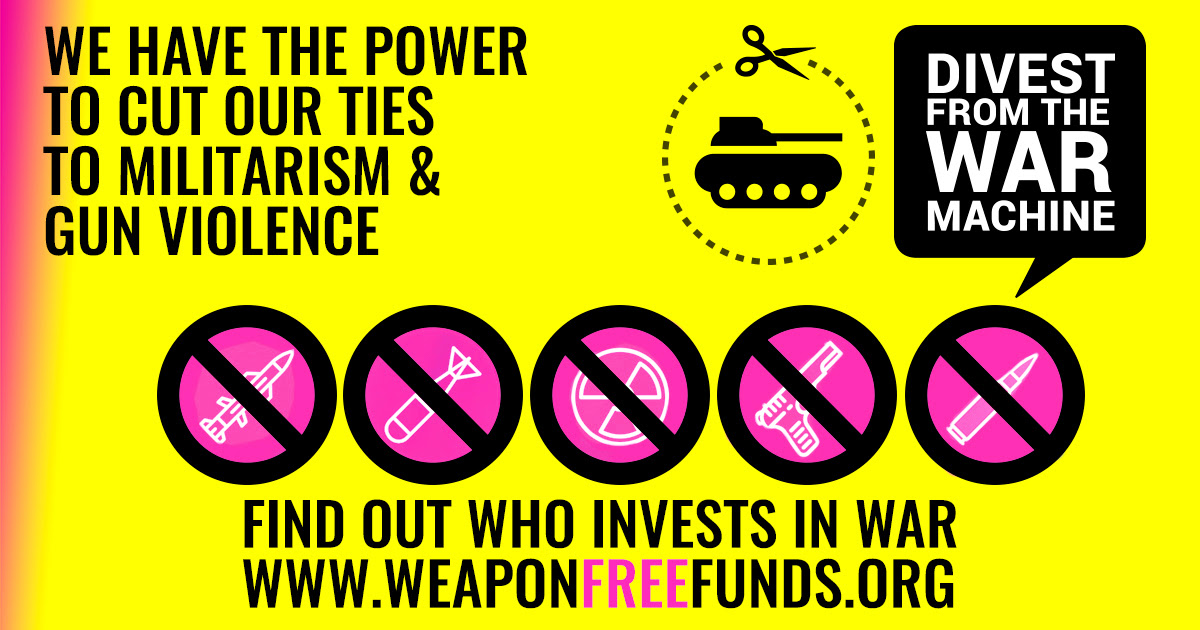 Weapons manufacturers steal from all of us. They take billions of our tax dollars to make products of death and destruction, reaping huge profits while our communities at home suffer. We are faced with rampant funding shortages for housing, education, food assistance, and clean water. Meanwhile the CEOs of the top five weapons makers pulled in a combined salary of $96 million. We need to lead and pledge to divest from war ourselves and the next step is to join forces locally to call out those Making a Killing on Killing; our cities, state pension funds, Universities, churches, and the BlackRock offices near you.  There are many ways to engage and we are here to help.

Today, we are excited to share with you a new tool to support you in divesting and to use while you engage with others to support them. We collaborated with As You Sow to create a searchable database to bring transparency to complicated mutual funds and ETFs. Search the Weapon Free Funds database to see if you or your community are invested in weapons and war!  Join others who are working to divest their cities, towns, states, universities, colleges, faith communities, and even your local foundations and philanthropists.  Funds with over $40 billion in assets have already divested in weapons and war, let’s keep that number growing!

This week Congress voted to allocate $716 billion for war, an increase of $82 billion.  That is lining the pockets of the rich while creating paths of death and destruction.  At our borders, refugees and asylum seekers are fleeing war and violence that is the result of our failed foreign policies. These same asylum seekers are placed in detention facilities that are built and run by military contractors. As if profiting from war around the world isn’t terrible enough, the military industrial complex has paved the way for these merchants of death and destruction to increase profits and destroy human lives at home.

Our personal investments, and the investments of our cities & towns and our colleges & universities are subsidizing war profiteering, making us all complicit in these atrocities. The good news is, we have the power to cut our ties to war.

The Weapon Free Funds database covers thousands of the most commonly-owned mutual funds from major asset managers like Vanguard, Fidelity, and BlackRock. The tool allows you to find out if your personal investments or your communities’ investments are being used to finance makers of military weapons and civilian firearms. It also enables you to find alternative, socially-responsible options that avoid the war economy. We can use this tool to hold our communities, fund managers, and investment firms like BlackRock accountable and to take personal action.

Let’s move our communities toward supporting education and infrastructure, not guns and bombs. Check out the Weapon Free Funds now and take on a weapons funder near you!

Toward a world without weapons,