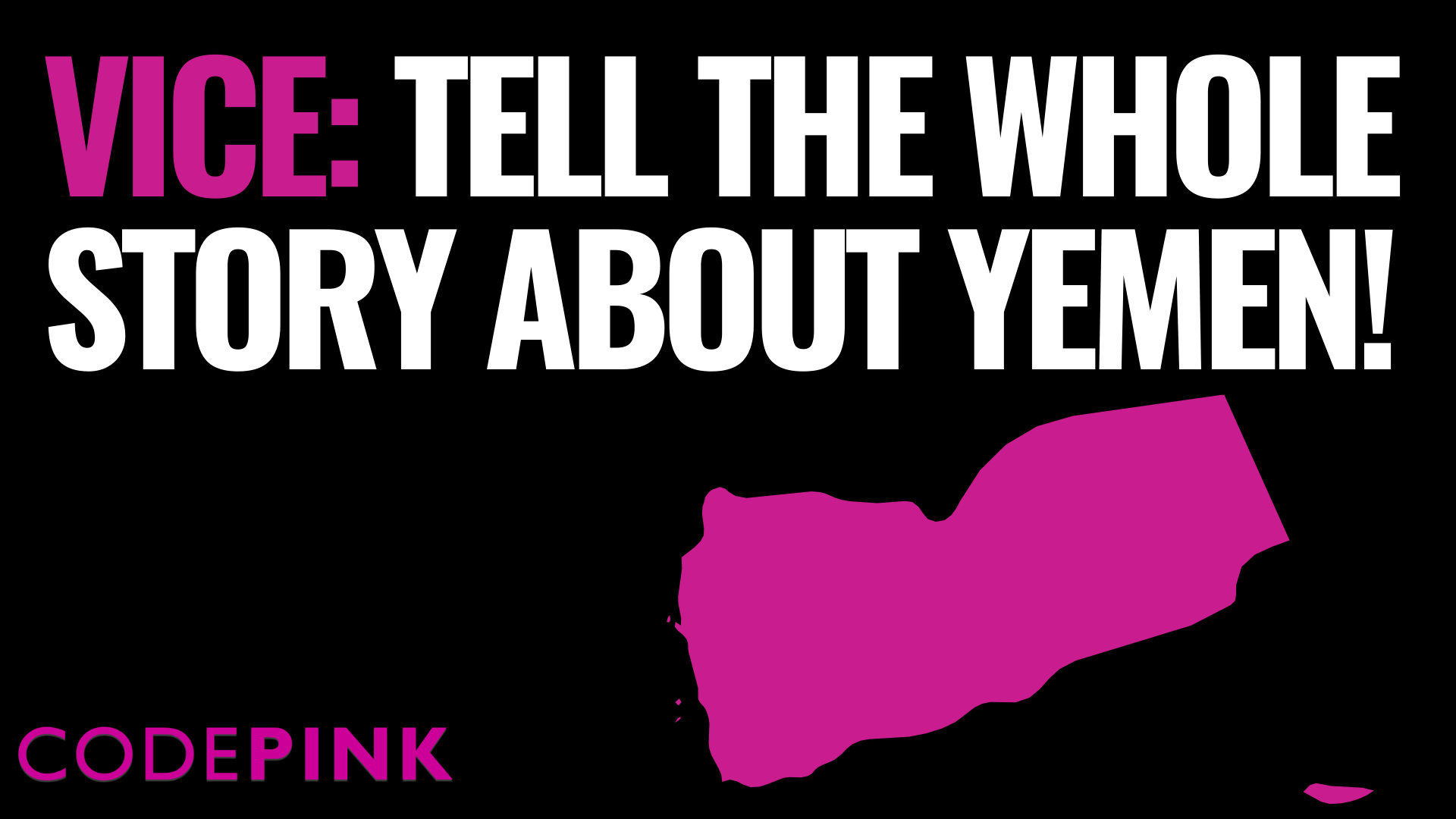 On April 28th, VICE released a video of its reporter Isobel Yeung in Yemen, documenting the situation on the ground. VICE did an incredible job… at ignoring the Saudi coalition’s war crimes in Yemen. The video focused entirely on the Houthis and mentioned in passing that “both sides” have committed war crimes without caring to elaborate on the Saudi-led blockade that is systematically starving Yemeni children.

Sign the petition to VICE and Isobel Yeung to accurately cover the humanitarian crisis!

A child is dying every 75 seconds in Yemen as a result of the war and blockade. The VICE piece “How Children in Yemen Became Collateral Damage” makes no mention of the fact that the blockade is being used as negotiation leverage by the Saudi-led coalition, a blockade that is starving children. Yeung reports from a “rehab center” for Yemeni children who were impacted by war. The children work with psychologist Mahyoub Al-Makhlafi, who said he got his doctorate in psychology at the American University in Cairo. The American University in Cairo only teaches in English, which Al-Makhlafi doesn’t speak, according to the New York Times. The university also doesn’t even offer a doctorate in psychology. On top of the issues with the “psychologist” that works with the children, the center is funded by — get this — the Kingdom of Saudi Arabia. Why would VICE report from a place with such obvious problems that were reported by the New York Times two years ago?

It’s probably no coincidence that this unbalanced coverage came out just a few weeks after it was reported that VICE was opening up a new office in the Saudi capital of Riyadh. Isobel Yeung responded to criticisms of the coverage by saying that they are not “pro-Saudi” because in the piece she stated that “both sides have committed war crimes,” which is true. She did say that in the video, but failed to elaborate or mention the blockade. VICE has covered Saudi airstrikes in Yemen, but they do not even scratch the surface of the suffocating blockade. If VICE is committed at all to real journalism, they should cover the main driver of the humanitarian crisis and call out Saudi Arabia!

Add your name to the petition & ask VICE to provide balanced reporting on Yemen.

As long as news outlets and important figures continue to ignore the blockade, Yemeni children will continue to starve. This coverage is so outrageous, because in a time where we are nearing peace negotiations, people should be calling for a lifting of the blockade so innocent Yemeni lives can’t be used as a bargaining chip. Outlets like VICE should do better!

Toward peace,
Danaka, and the entire CODEPINK team.

PS. Peace lovers, our Drone Free Zone tee is still in stock in the CODEPINK store.