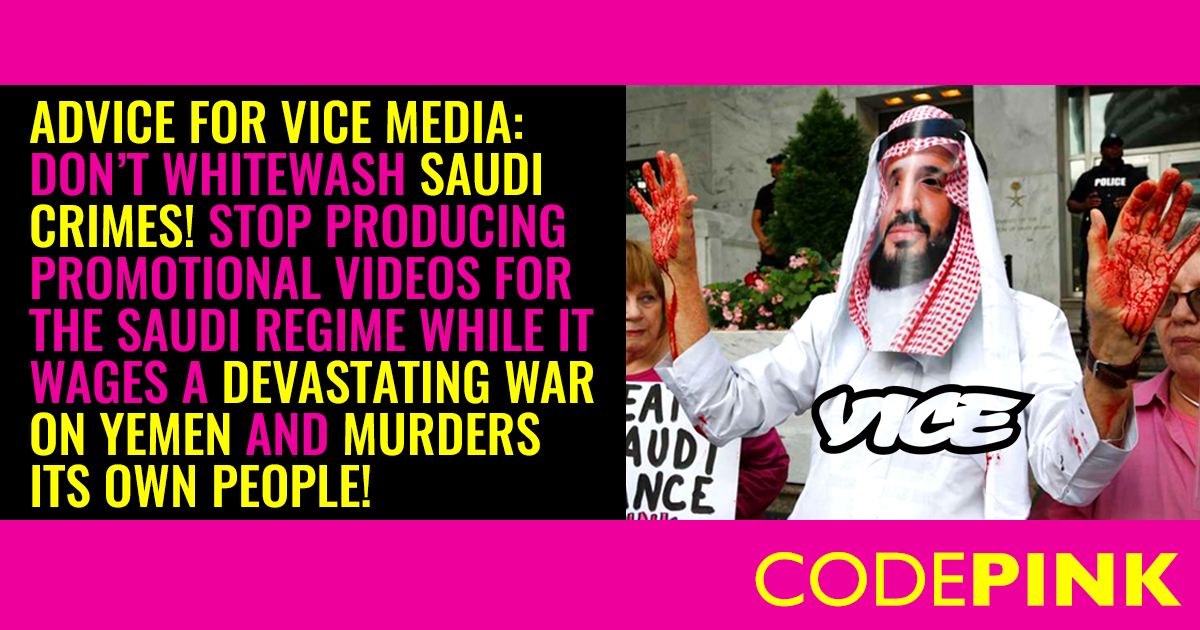 VICE Media is a master of branding. They’ve honed an image of themselves as hip, gritty, and progressive — a cool alternative to the boring mainstream media. That’s why it’s such a shock that they are in the pockets of Saudi Arabia, using their branding talents to whitewash the violent activities of Mohammed bin Salman (MbS) and his murderous regime.

The Saudi Research and Marketing Group (SRMG) — an extension of the Saudi monarchy — and VICE Media have partnered on a series of promotional videos about Saudi Arabia that show the country to be a thriving, modern, liberalizing society. The first video, about an elite camel race in the desert, has already gotten over 5 million views on Youtube. It presents MbS as an economic and social reformer, but says nothing about the war on Yemen and imprisonment and murder of activists and journalists. It’s the exact opposite of what you would expect from a supposedly progressive hard-hitting media company. Tell VICE to live up to the journalistic integrity they should have. Tell them to cancel their contract with Saudi Arabia’s SRMG.

By getting paid to cover up Saudi violence and repression, VICE makes clear that, as long as they can turn a profit,  they’re willing to actively support the actions of a ruthless Prince with a zealous appetite for murder and power. No media company that claims to do honest reporting should partake in such a dishonest campaign.

VICE Co-Director Shane Smith met with MbS last spring during the prince’s tour of the U.S. to garner influential fans. Smith must’ve been taken with MbS because he agreed to help his new friend whitewash the Saudi regime’s crimes.

Sign our letter demanding that VICE end its relationship with SRMG and stop publishing puff pieces covering up Saudi crimes such as the war on Yemen and murder of Washington Post journalist, Jamal Khashoggi.

VICE’s promotion of MbS and his murderous regime is shameful. No amount of camel races, movie cinemas, or conciliatory women’s rights “advancements” can cover up starving Yemeni children or the murder of Jamal Khashoggi. We demand an end to VICE’s naked disregard for human life in the search for profit.