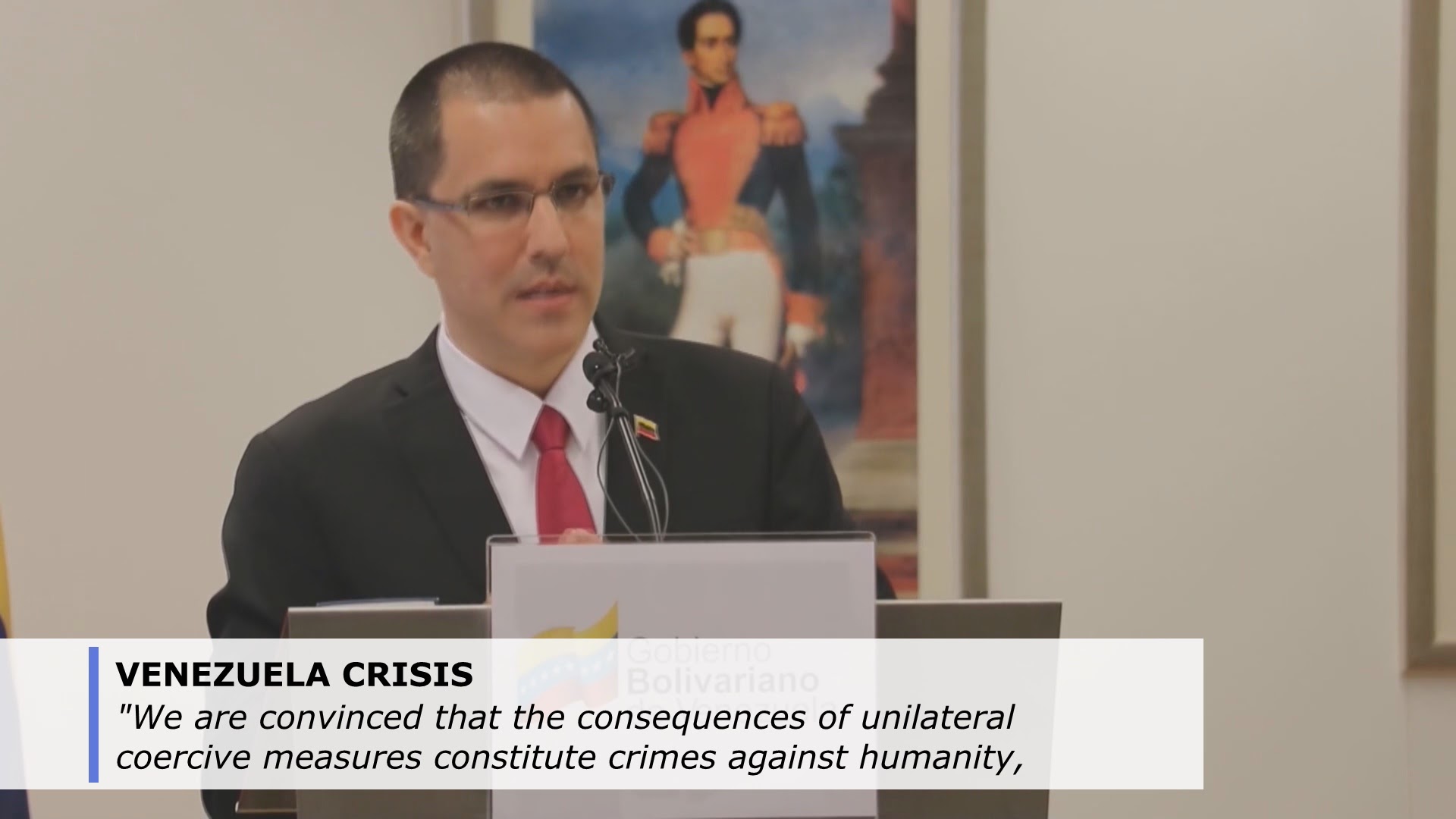 Before the world was consumed with the fight against the coronavirus, Venezuela had already seen its healthcare system crippled and its population harmed by the Trump administration’s sanctions. The devastating effects of these sanctions (technically known as unilateral coercive measures) led Venezuela to request that the International Criminal Court investigate the sanctions as a crime against humanity. The ICC is an international court tasked with investigating, prosecuting and judging people accused of genocide, war crimes and crimes against humanity, among others. It was founded in 2002 after the approval of a treaty known as the Rome Statute.

Countries that have ratified the Rome Statute are member states to the ICC and can request that the ICC initiate investigations. Venezuela asked the ICC prosecutor to examine whether crimes were committed as a result of the imposition of U.S. sanctions. The ICC deals with persons, meaning it cannot investigate the United States or any other country. It can, however, investigate individuals and then prosecute any person or persons responsible for a crime codified in the Rome Statute. Although Venezuela brought the case to the ICC, it is up to the court to identify which persons are responsible for the criminal sanctions.

The government of Venezuela is arguing that the U.S. imposed sanctions constitute a crime against humanity as defined in Article 7 of the Rome Statute, which states that such crimes include “a widespread or systematic attack directed against any civilian population… pursuant to or in furtherance of a State or organization policy to commit such an attack.”

This definition matches what we know about the impacts of the sanctions on the Venezuelan people. A report by the Center for Economic and Policy Research found that the sanctions had caused at least 40,000 deaths in 2017-2018. Alfred de Zayas, a former U.N. Special Rapporteur, updated this figure to 100,000 deaths, caused by “the impossibility of timely access to medicines” as a result of the U.S. sanctions. The Venezuelan government itself has declared that the sanctions have led to an “increase in infant and adult mortality, increase in disease, reduction of caloric intake, contraction in food import [and] a negative impact on public services such as education, access to potable water, electricity and transportation.” It is therefore clear that the sanctions are widespread and affect civilian populations. One need only listen to Trump administration officials to know that they are implemented to further the U.S. government policy of regime change in Venezuela, as they have admitted in the past that the sanctions are designed to collapse the economy.

Now that Venezuela has presented the ICC with its complaint, the prosecutor will carry out inquiries in a preliminary examination, and then, should the case continue, the prosecutor will open an investigation aimed at determining whether crimes under the Rome Statute have been committed and who the person or persons responsible are.

It should be noted that the United States has not ratified the Rome Statute and is not a member of the ICC. In fact, the U.S. passed a law called the American Service Members Protection Act, which prevents U.S. government officials and members of the military from being accountable to the ICC. Moreover, Secretary of State Mike Pompeo has threatened the ICC with sanctions and denied ICC investigators visas. Yet although the U.S. is not a member of the ICC, the crimes denounced by Venezuela were committed in Venezuela, granting the ICC the jurisdiction to investigate even if the responsible parties end up being individuals from a country that is not part of the institution.

This is the second time that the United States has been accused of crimes against humanity relating to sanctions. In 2018, Iran won a case against the United States in the the International Court of Justice (ICJ), when that court ordered the U.S. to lift the sanctions. The difference between the two courts is that the ICJ deals with bilateral issues between states, whereas the ICC is about persons. Unfortunately, the Trump administration ignored the court’s decision and instead withdrew from a treaty with Iran that formed the basis of the decision.

Similar to Iran’s ICJ case, the U.S. will likely ignore that ruling should the ICC find that the sanctions against Venezuela are indeed a crime against humanity. However, the case will be useful in demonstrating, yet again, that the U.S. flouts international law and multilateralism, two of the pillars of global diplomacy. Furthermore, should Venezuela win at the ICC, it will help to raise awareness about the fact that not only are sanctions war, they can actually be a war crime. 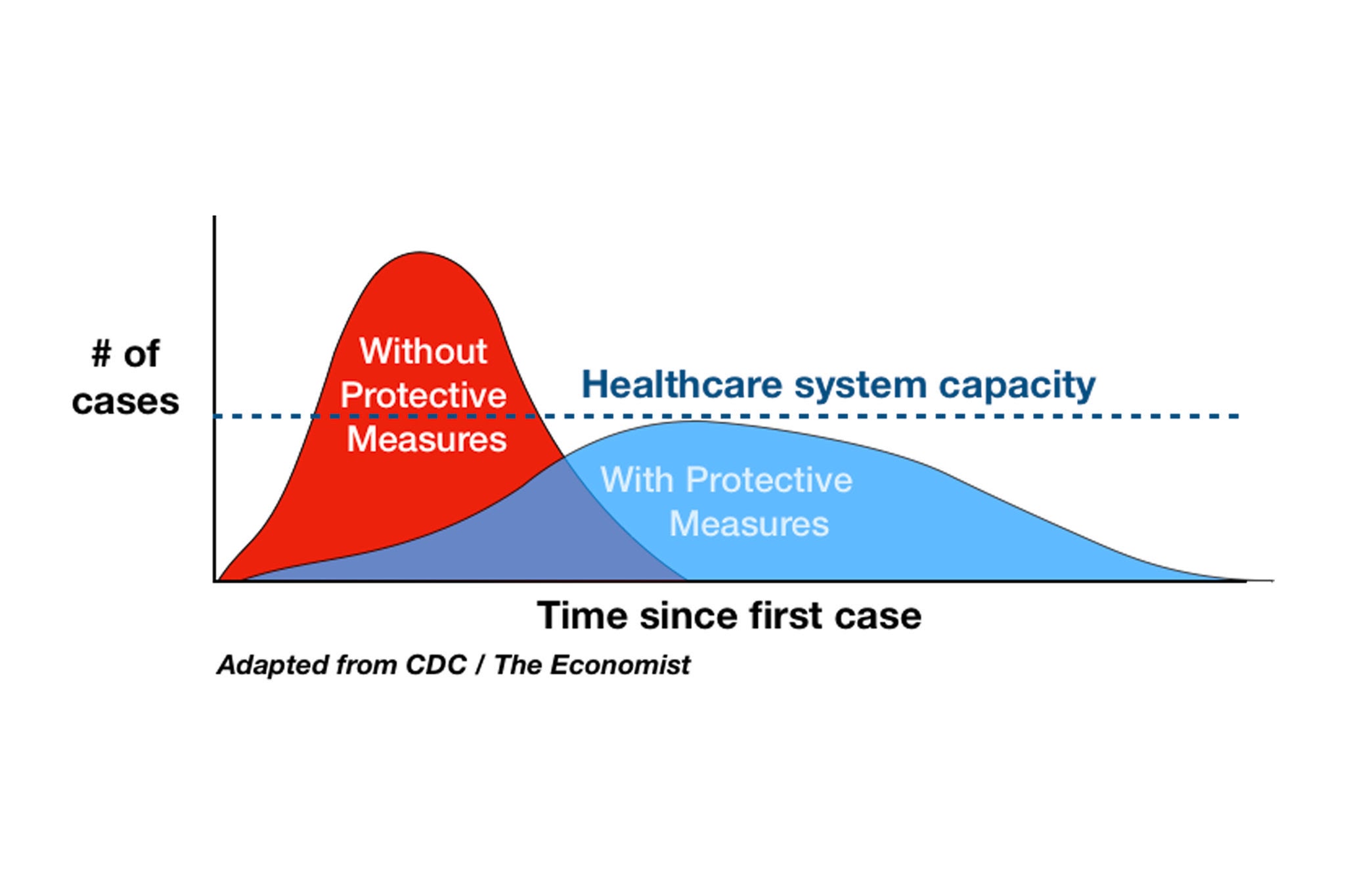 It is no exaggeration to call U.S. sanctions a crime against humanity or a war crime, and this is especially true during the global coronavirus pandemic. In theory these sanctions have humanitarian exemptions, but in practice, both Iran and Venezuela have faced severe obstacles in acquiring medical supplies and equipment. By now, many of us have seen the above graph, showing the importance of social distancing. What the sanctions have done against Venezuela and Iran is decimate the capacity of their healthcare systems, pushing the dotted line way down.

Instead of offering to lift sanctions as a humanitarian gesture to fight this pandemic, the Trump administration is applying even more pressure on both Venezuela and Iran. This is a crime not just against Venezuelans and Iranians, but against the entire world. Pandemics know no borders and weak links in the global response will only see the virus persist longer, causing more deaths everywhere.