Urgent! How Congress can stop strikes on Syria! 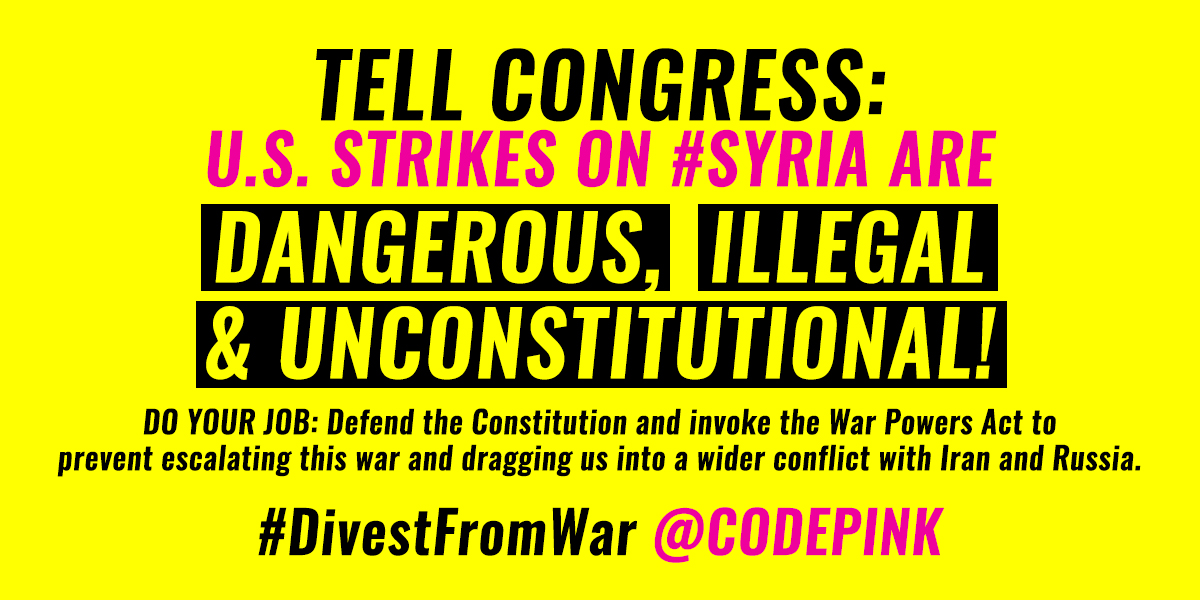 On Friday night, Donald Trump violated US law and international law by bombing Syria. This impulsive decision to strike Syria, without waiting for the chemical inspectors to carry out their investigations and without Congressional approval, is a dangerous escalation of an already horrific war. And while US military has said this operation is over, President Trump and National Security Advisor John Bolton want a more sustained bombing campaign, one what threatens a wider war with Iran and Russia.

This situation calls for a “CODEPINK alert.” We need you to act now. Tell your Senators and Representative to invoke the War Powers Act to stop unconstitutional strikes on Syria.

Congress must do its job! Instead of continually abdicating its responsibility to decide if and when we go to war, Congress must reassert its war powers and stop the President’s reckless foreign policy.

Tell your Senators and Representative to invoke the War Powers Act to stop unconstitutional strikes on Syria.

Bombing Syria will not bring the Syrian people closer to what they really need, which is an end to this atrocious seven-year-old conflict. The only way to prevent further atrocities like the use of chemical weapons is through sustained, multilateral diplomacy to achieve a political solution. Syrian civilians also need humanitarian aid to alleviate the tremendous suffering from years of war. And Syrians need refuge in safer countries, refuge that the Trump administration has denied them.

Don’t let Donald Trump escalate this war and drag us into a wider conflict with Iran and Russia.