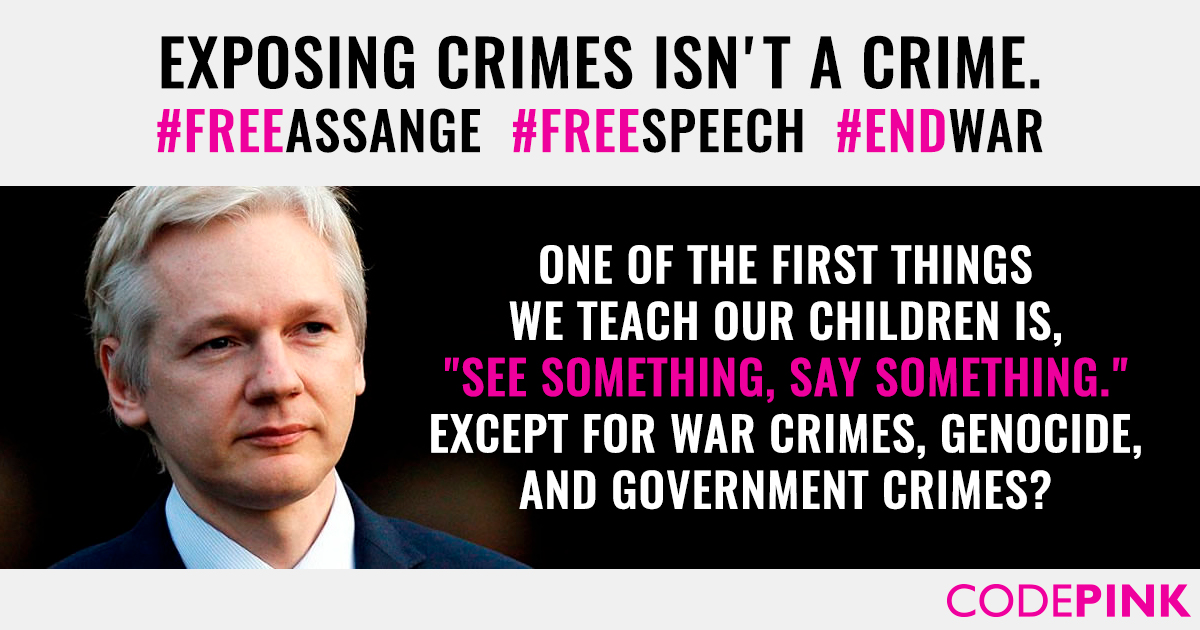 Next week, on February 24, a court in the U.K. will hold a hearing to determine whether to grant Trump’s request to extradite WikiLeaks founder Julian Assange to the United States for trial on 18 charges under the Espionage Act carrying up to 175 years in prison.
Please sign this urgent petition to the U.K. government: Don't extradite Assange to the US. Instead, we urge you to release him and ensure his safe passage home to Australia.

Assange’s alleged crimes date back to 2010, when the organization he founded, WikiLeaks, transmitted documents to media outlets including Le Monde, The Guardian and The New York Times. The documents, which were provided to WikiLeaks by whistleblower Chelsea Manning, included 250,000 US diplomatic cables and US army reports about military operations in Iraq and Afghanistan, and exposed cases of torture, abduction and disappearances.

As an anti-war organization, we have found these documents critical to understanding our government’s actions. The publication of these documents by media outlets was clearly in the public interest, and not an act of espionage.

If the legal persecution of Assange continues, investigative journalism and press freedom will be the victims, since news organizations regularly rely on and publish classified information to serve the public interest.

We are also very concerned about Assange’s health. We visited him several times when he was granted asylum in the Ecuadoran Embassy, and worried then about his physical and mental health. Since his arrest there in April, he has been locked up in Belmarsh Prison in London and UN special rapporteur Nils Melzer reported that he has been deliberately exposed to inhuman and degrading treatment that could be described as psychological torture.

Join us in calling on the U.K. government to respect the principles of freedom of expression and the defence of journalism, and to respect Assange’s human rights. Rather than being extradited to the U.S to be tried and imprisoned, he should be released and allowed to return to his home to Australia.

P.S. Have you heard about all the places CODEPINK is traveling to in 2020? Sign up now to join us in Bolivia, Columbia, Cuba, or Iran this year!