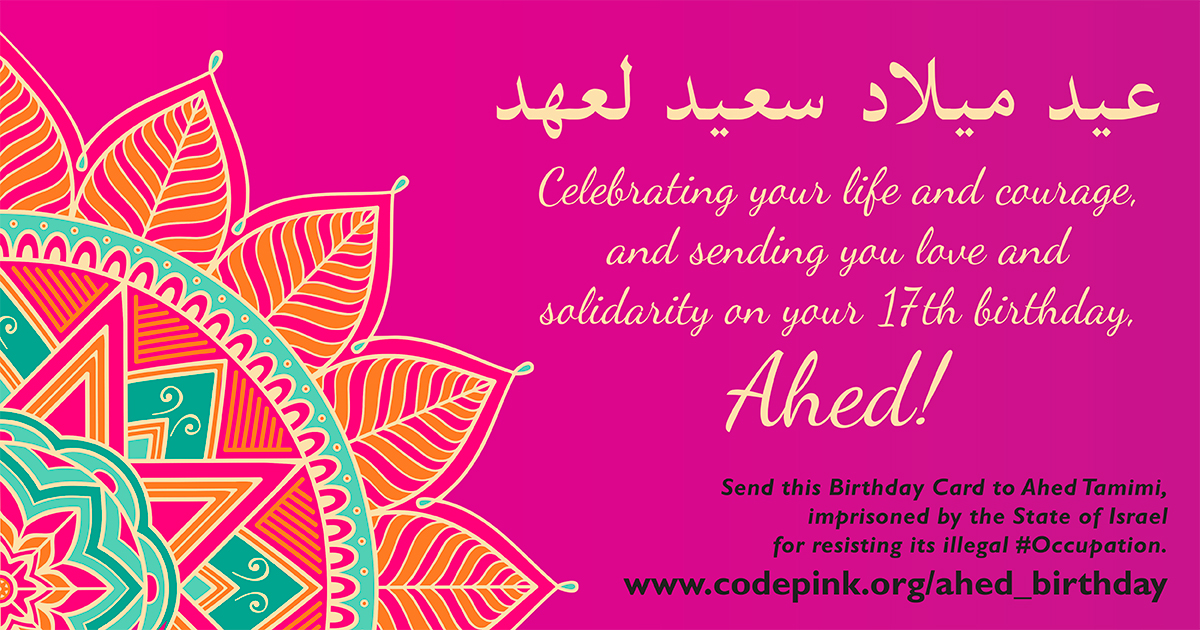 We just hung up after speaking with the attorney for 16-year-old Ahed Tamimi. The news is horrific. Israel is refusing to release her on bail pending trial. Not only this, but the court proceedings against her will begin on January 31, the day of her 17th birthday. Rather than celebrating with family and friends, eating cake, and having a party, Ahed will spend her birthday in a military courtroom. She will sleep that night in a prison cell.

Sign the birthday card to Ahed and write a personal message of love and support. We will have the card and your messages delivered to Ahed in prison.

According to the UN Convention on the Rights of the Child, the arrest and imprisonment of children is only to be used as a last resort, for the shortest period of time, with the primary consideration being the best interests of the child. But, because Israel regularly denies Palestinian children their human rights, Ahed will spend her 17th birthday in prison. A few days ago, her father told us that his heart breaks every single moment that his daughter is imprisoned. If not for the occupation, she would be free.

Join us in sending Ahed a birthday card filled with love, support, and solidarity.

Israel is trying to prevent any support for the Palestinians’ struggle for freedom. Read from Medea on how outrageous it is that Israel has banned CODEPINK and 5 other US organizations from entering the country. Then, join us in sending birthday solidarity to Ahed.

In love and solidarity,
Ariel Gold, and the entire CODEPINK Team

P.S. On December 30th, in preparation for Ahed’s trial and birthday, we will be protesting in Washington, DC. Join us there or plan a protest in your city to #FreeAhed.