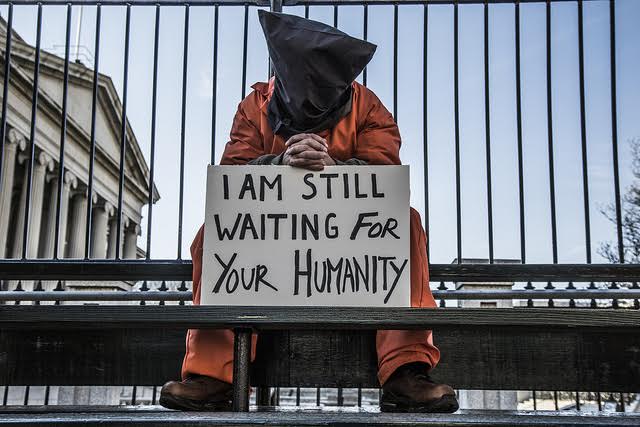 WASHINGTON, D.C.—Today, torture survivors and their advocates released an Open Letter urging President-Elect Biden not to nominate torture defender Mike Morell for CIA Director and asking the Senate not to approve Biden’s nominee Avril Haines, a torture enabler, as Director of National Intelligence. The letter was also delivered this morning to members of the Senate Intelligence Committee, as well as President-Elect Biden and Vice-President Elect Kamala Harris.

Signatories include: Mansoor Adayfi, a writer from Yemen imprisoned for 14 years without charge at Guantanamo Bay, where he was force fed for two years; Moazzam Begg, a British-Pakistani ex-Guantanamo detainee and Outreach Director for CAGE, a service organization for torture survivors and communities impacted by the War on Terror; Sister Dianna Ortiz, a US missionary tortured by members of the CIA-funded Guatemalan army; Colonel Larry Wilkerson, Whistleblower and Chief of Staff to Secretary of State Colin Powell; John Kiriakou, former CIA officer imprisoned after exposing CIA waterboarding; and musician Roger Waters (formerly with Pink Floyd), whose song “Each Small Candle” is a tribute to torture victims.

The organizers of the letter, Marcy Winograd of Progressive Democrats of America, Medea Benjamin of CODEPINK, and Jeremy Varon of Witness Against Torture, have been lobbying against the inclusion of torture apologists in the Biden administration since the August Democratic National Convention, Their efforts include a letter to Biden from 450 DNC delegates, a CODEPINK petition signed by over 4,000, and calls to the offices of the Senators on the Intelligence Committee. “When we started this campaign,” says 2020 DNC Delegate Marcy Winograd, “Morell was considered the frontrunner, but opposition to his disgraceful defense of torture has cast a pall on his nomination. We want to make sure his nomination is off the table, and that Biden and the Senate also understand we reject Avril Haines for her complicity in suppressing evidence of CIA torture,”.

As CIA Deputy Director from 2013-2014, Avril Haines overruled the CIA Inspector General in choosing not to punish agency personnel accused of hacking into the Senate Intelligence Committee’s computers during their investigation into the CIA’s use of torture. She was also part of the team that suppressed evidence of CIA torture by redacting the Senate Intelligence Committee’s landmark torture report, reducing a 6,000 page document to 500 pages.

Jeremy Varon, Witness Against Torture: “Joe Biden and Kamala Harris promised to restore transparency, integrity, and respect for the rule of law to government. So how can their National Security team be led by people who endorsed, or tried to cover up, the clear crime of torture? It makes no sense.”

Djamel Ameziane, Former Guantanamo Prisoner (2002-2013): “Elevating torture apologists to a leadership position within the Biden administration will damage the USA’s standing and give the world’s dictators succor and comfort.”

Jeffrey Kaye, Author, “Cover-Up at Guantanamo: “Morell and Haines have put loyalty to CIA torturers above adherence to US treaties and domestic law, as well as basic morality. To allow them to serve in government would send a message to all that accountability for torture is passé, and that war crimes will always be dismissed with a wink from those in high office.”

John Kiriakou, Former CIA officer who blew the whistle on agency torture: “Morell has disingenuously said that he was unaware of the CIA’s torture program at the same time that he was the Agency’s fourth-ranking officer. As deputy CIA Director and Acting CIA Director, he oversaw illegal activities around the world.  I can’t believe that any sane person could or would consider Mike Morell as a serious candidate for CIA Director.”

Medea Benjamin, CODEPINK: “We can’t allow the new Biden administration to include people who have been involved--in any way--in heinous acts of torture. That’s why we are part of a groundswell of opposition to both Mike Morell and Avril Haines for key intelligence positions. No torture apologists should be allowed to serve in this administration. Period.”

Torture Survivor Mansoor Adayfi on Morell’s assertion that torture is effective: "In Guantanamo, when they put you under very bad circumstances—like 72 hours under very cold air conditioning, and you are tied to the ground and someone comes and pours cold water on you—you are going to tell them whatever they want you to say. I will sign anything, I will admit anything!,” says Dayfi.

Torture Survivor Moazzem Begg on his treatment at Bagram Air Base before arriving at Guantanamo: “They tied me up with my hands behind my back to my legs, kicked me in the head, kicked me in the back, threatened to take me to Egypt to be tortured, to be raped, to be electrocuted. They had a woman screaming in the next room whom I believed at that time was my wife. They bought pictures of my children and told me I would never see them again.”

Colonel Larry Wilkerson, torture whistleblower: “Kidnapping, torture and assassination have no place in a democracy and turn the CIA into a secret police ...Abuses of the kind documented in the Senate's report could happen again.”

James Dorsey, attorney for released Guantanamo detainee Ahcene Zemiri. “As a Marine Corps veteran, I have always understood that when our servicemen have been captured and tortured in the past, a real source of strength for them has been knowing that their country would never engage in such conduct. “

From: Torture Victims and their Advocates Opposed to Mike Morell for CIA and Avril Haines for National Intelligence

Say NO to Morell; Say NO to Haines.

As survivors of torture and their advocates, we urge President-elect Biden not to nominate Mike Morell for CIA Director and ask the Senate not to approve Biden’s nominee Avril Haine as Director of National Intelligence.

Both Morell and Haines have troubling records on torture — a form of violence with lingering effects: anxiety, stress, physical and psychological trauma. We know because we have lived this nightmare, either personally or as advocates of survivors forever haunted by past torture.

We believe that the record of Morell and Haines disqualifies them from directing intelligence agencies. Their appointment would undermine the rule of law and U.S. credibility around the world. It would be a callous rebuke to people like ourselves and all those who care about human rights and the protection of basic dignity.

Morell, a CIA analyst under Bush and both Deputy and Acting CIA Director under Obama, has defended the Agency's "enhanced interrogation" practices. These included waterboarding, physical beatings, sleep deprivation, stress positions, and sexual humiliation. These practices have commonly, and rightly, been denounced as torture. In July 2014, President Obama plainly admitted, “We tortured some folks.”

That same year, the Senate Intelligence Committee issued the 500-page summary of its “Torture Report.” Drawing on millions of pages of internal CIA documents, the report denounced CIA torture as both inhumane and ineffective. It concluded that the Agency’s use of torture was far more frequent and gruesome than previously acknowleged. Senate investigators also documented that the CIA had lied to Congress, the President, and the American people by falsely insisting that its “enhanced interrogations” had forced detainees to reveal critical information, and thereby thwarted terrorists plots.

Yet in his 2015 memoir, Morell asserted without evidence that torture was effective. As the Military Times reported, Senate intelligence committee staffers were so troubled by Morell’s claims that they issued a lengthy rebuttal in a special report. Referencing the CIA’s own documents, the report blasted Morell’s numerous errors and misrepresentation of established facts.

In addition, Morell defended the CIA’s destruction in 2005 of nearly 90 videotapes of the brutal interrogation of Abu Zubaydah and other detainees in CIA black sites. Sought by congress, the courts, and attorneys, the tapes doubtless depicted troubling US conduct. Their destruction came in the wake of the Abu Ghraib abuse revelations, just as the country was vigorously debating the lawfulness and morality of the treatment of detainees.

To defend the elimination of the tapes, as Morell has done, is unconscionable. It defies the transparency our democracy needs to function, while serving to shield from accountability those potentially guilty of grave crimes.

The claim that “torture works” is the great lie used by tormentors throughout history to justify their abuses. When repeated by high-ranking officials to defend post-9/11 torture, it serves to excuse the inexcusable.

Morell has no place in a Biden-Harris administration. His nomination would send a chilling message to torture survivors and other victims of grave injustice that the United States government, including the Biden administration, does not uphold its own stated principles. Senator Ron Wyden (D-OR) from the Senate Intelligence Committee has said about Morell: "No torture apologist can be confirmed as CIA director. It's a nonstarter." We agree and urge the President-elect not to nominate Morell.

We also oppose Avril Haines, another toture apologist, as Director of National Intelligence. Since she has already been nominated, we ask Senators to oppose her confirmation.

As CIA Deputy Director from 2013-2014, Haines overruled the CIA Inspector General by chosing not to punish agency personnel accused of hacking into the Senate Intelligence Committee's computers during their investigation into the CIA's use of torture. In addition, Haines was part of the team that redacted the Senate Intelligence Committee’s landmark 6,000-page report on torture, reducing the public portion to a 500-page summary. The full report has been sought by attorneys, human rights advocates, legislators, and scholars seeking a full account of the United States’s troubling conduct.

Haines also supported Trump’s nomination of Gina Haspel for CIA director. Supervising a CIA black site in Thailand in 2002, Haspel was directly implicated in CIA torture. She later drafted the memo authorizing the destruction of the CIA videotapes.

Like Morell, Haines has worked both to defend torture and surpress evidence of it. She too, is incompatible with the stated aim of the Biden-Harris administration to restore integrity and respect for the rule of law to government.

The new administration must show the American people and the world that it acknowledges past disturbing U.S. conduct and will ensure that such abuses never recur. To do that, it needs intelligence leaders who have neither condoned torture nor whitewashed the CIA’s ugly record of using torture. We need intelligence leaders who understand that torture is illegal under international law; that is inhumane; that it is ineffective; that it puts at risk U.S. military personnel, should they be captured by adversaries; and that it violates the restoration of trust in American decency central to Biden’s vision for his presidency.

That is why we urge President-Elect Biden not to nominate Mike Morell for Director of the CIA and the Senate to reject the nomination of Avril Haines for Director of National Intelligence. The people of the United States and the world deserve better.

Maher Arar, Canadian torture and rendition survivor; whipped with an electrical chord and forced to confess while in US custody in Syria

Lakhdar Boumediene,  Algerian-born citizen of Bosnia and Herzegovina imprisoned at Guantanamo Bay from 2002-2009, force fed for two years; lead plaintiff in Boumediene v. Bush, a 2008 US Supreme Court decision that Guantanamo detainees have the right to habeas corpus in US federal courts

Sister Dianna Ortiz, US missionary teaching Mayan children, tortured in 1989 by members of the US supported Guatemalan Army

Mario Avila, a Guatemalan torture survivor kidnapped in 1969 and again in 1976 and tortured in clandestine jails under the directives of the U.S. government; Colectivo Guatemalteco Los AngelesTorture Abolition and Survivors Support Coalition (TASSC)

Helen Sklar, Certified Specialist in Immigration Law, represented torture victims from all over the world in asylum proceedings

Jeremy Varon, Witness Against Torture and Professor of History at The New School

Alfred W. McCoy, author A Question of Torture: CIA Interrogation from the Cold War to the War on Terror

Sandra and Ulis Williams, Activists, School of the Americas Watch