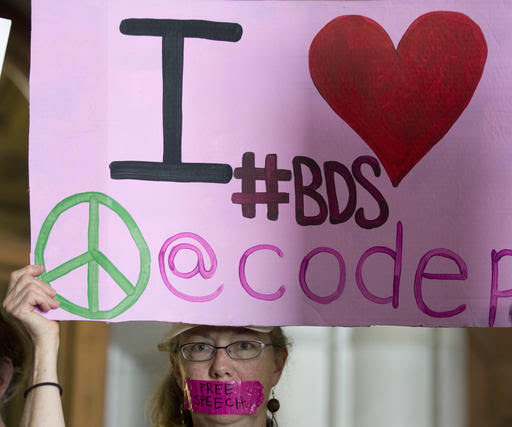 Earlier this year Governor Andrew Cuomo issued an executive order requiring New York State agencies to divest from entities that engage in boycotts in support of Palestinian rights. He resorted to an executive order because anti-boycott legislation was stalled in the state legislature. Now the New York City Council is joining the effort to curtail our constitutionally protected right to boycott.

On Thursday, Sept. 8th, the Contracts Committee of the New York City Council will convene a hearing on Resolution #1058-A "condemning all efforts to delegitimize the State of Israel and the global movement to boycott, divest from, and sanction the people of Israel.” Even the language of this resolution betrays a fundamental misunderstanding of the BDS movement, which is aimed not at the people of Israel, but at the Israeli government and companies complicit in Israel’s violations of international law and Palestinian human rights.

Join CODEPINK and others Thursday, Sept. 8th, at City Hall:

9 am - Press conference on the steps of City Hall.

Bring banners and signs, but no wooden or metal sticks or posts.

10 am - Hearing in the City Council chambers.

The hearing is open to the public and you should be able to sign up that morning to give testimony. We do not know how long the hearing will go for or how long you might have to wait to give your testimony. If you do sign up and have your comments written out please bring enough copies to give to the council members as well as to share with the press. Please note: we are not planning to disrupt the hearing, but instead want to make sure that the city council and general public hear about why we support the boycott movement in support of equality and justice...

This is a resolution and not a piece of legislation, and as such, it would not have the effect of law should it pass. However, it is still critically important that we not sit by as our elected representatives undercut our constitutionally protected rights.

We hope you'll join us tomorrow, but if you can't, make your voice heard by contacting key city council members through our action page!

Let’s make sure the City Council gets the message that we support equality and justice, and that we will fight to protect our right to boycott.