This is not beautiful... 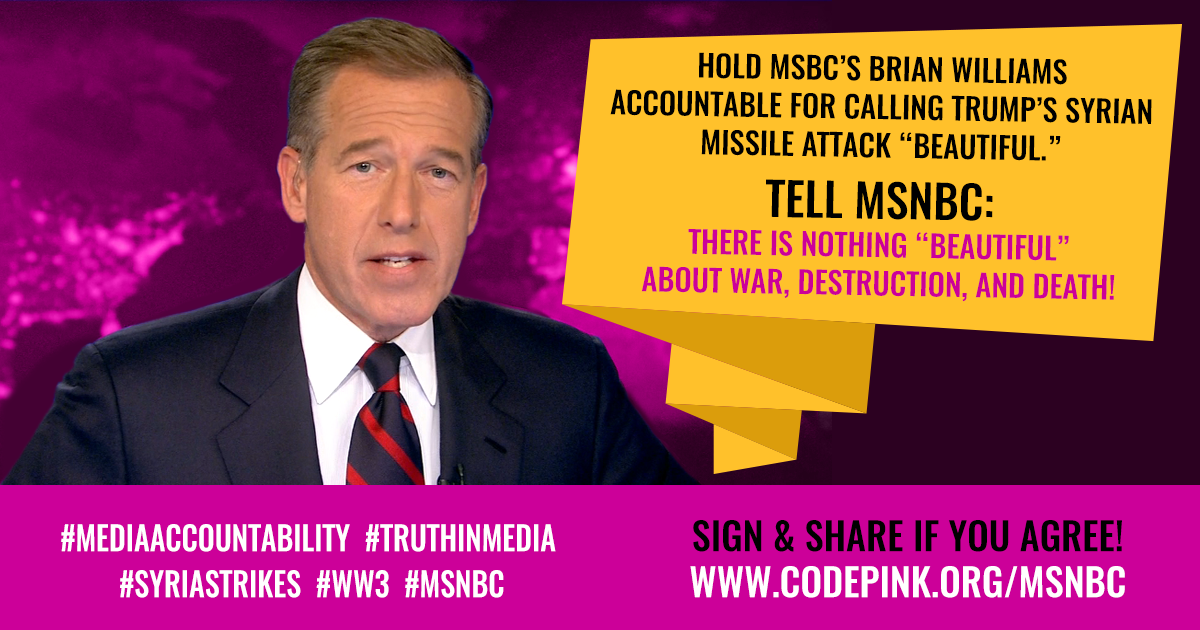 When President Trump attacked Syria with Tomahawk missiles last week, the media cheered. MSBC’s Brian Williams even said, “We see these beautiful pictures at night from the decks of these two U.S. Navy vessels in the eastern Mediterranean.”

Let that sink in. Beautiful. He called a missile attack beautiful.

There is nothing beautiful about war.

Sign the petition to hold the media accountable: Tell MSNBC there is nothing beautiful about war, destruction, and death.

This recent attack on Syria was not the first time the media applauded the destruction of life in the Middle East. When lies drove us into war with Iraq, the media might as well have thrown a parade. And when we don’t see applause, we often see nothing. This is the case with Yemen, which has endured so much destruction in the wake of US-supported Saudi bombings, a Yemeni child dies every 10 minutes from malnutrition.

This is the result of bombs like the ones Brian Williams called beautiful—children starving to death. This is the news they aren’t showing us, the news the world deserves to see. When we know the story, we can begin to change the story.

We *do* know the story, and we are taking to the streets today in New York City, Washington D.C., Los Angeles and San Francisco, to call the media to task and hold a hunger strike in solidarity with the people of Yemen.

Whether or not you can join us in one of these cities, you can still take action to hold the media accountable:

Sign our petition to tell MSNBC there is nothing beautiful about war, destruction, and death.

Tell Brian Williams, MSNBC, and the mainstream media they must be covering the humanitarian crises in Yemen instead of waxing poetic about the beauty of Tomahawk missiles. They should be calling for a US budget that supports children, education, and the environment over military spending, bombs and war. The media is the voice of our culture and we can use our own voices to help shape their message.

Let’s show them what beauty really is. The beauty of people coming together to demand truth and justice and fairness and peace. The beauty of resistance. Share the image at the top of this email on your Facebook andTwitter accounts.

Towards peace in Yemen, Syria, and all around the world,
Ann, Ariel, Jodie, Mariana, Mark, Medea, Nancy, Paki, Paula, Taylor and Tighe

P.S. Don't forget to join our #No$54ForWar Campaign and see steps you can take to pass a city resolution urging our elected officials to move our tax dollars from militarism to human and environmental needs.