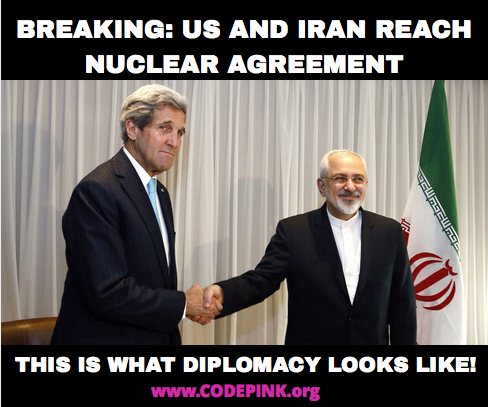 VICTORY! The US, Iran and other countries have announced a historic agreement to restrict Iran’s nuclear program in exchange for the easing of economic sanctions. We are thrilled that after 30 months of grueling negotiations, a deal has been reached and we have averted another war in the Middle East. We send out thanks to all the negotiators who worked so hard and refused to give up.

Unfortunately, the Republican leadership in Congress now has 60 days to sabotage the deal, putting us back on the path to confrontation with Iran. Take action and urge your Representative and Senators to support the deal!

The nuclear agreement is a great victory for peace-loving people around the world. We saw what happened when the US invaded Iraq and Afghanistan: devastated and impoverished communities; hundreds of thousands dead; our country economically bled; and the spread of ever more extremist groups like ISIL. That’s why the American people are so supportive of this Iran deal!

But watch out. Over the next two months, Congress will review and likely vote on this deal, and already hard-liners in Congress are threatening to kill the agreement and a handful of billionaires are funding multimillion-dollar ad campaigns against the deal.

These next two months are crucial, and we need all hands on deck. Join us to call on our congressional representatives to represent the interests and desires of the American people by supporting this historic deal.