There’s a dangerous bill on the move 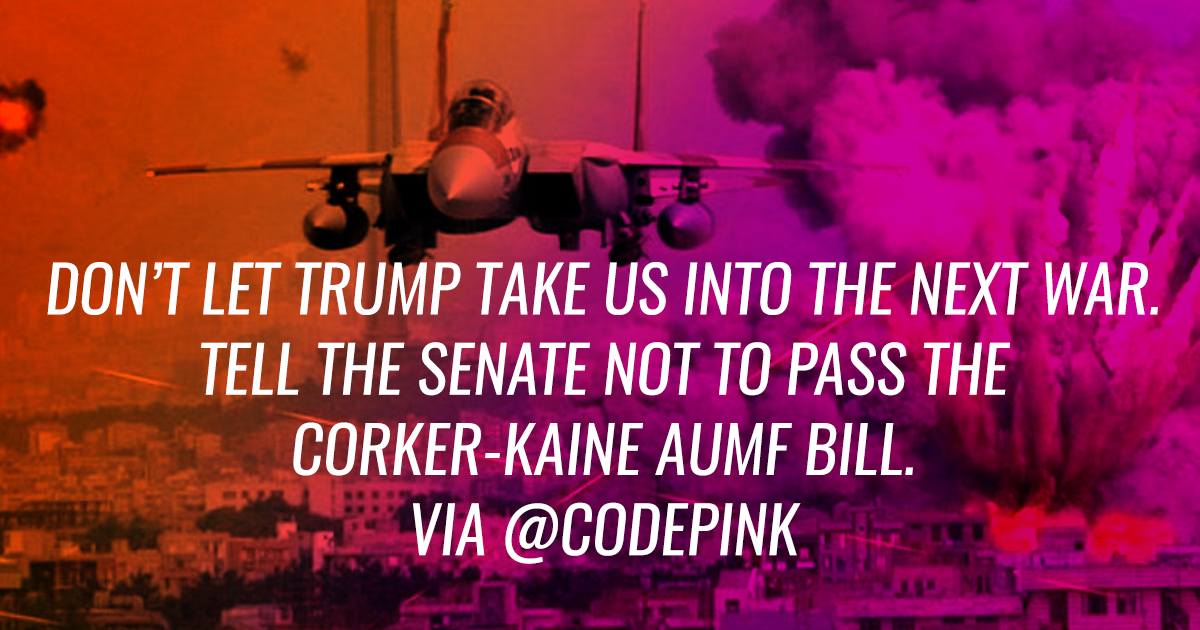 We have a war problem. Since 2001 we’ve waged war against an ever-increasing number of groups on the soils of a growing number of countries. We’ve used the Authorization for the Use of Military Force (AUMF) signed by Congress in 2001 and 2002 as an excuse to launch missiles and help rogue missions in Libya, Afghanistan, Pakistan, Syria, Iraq, and countless other places. It’s the wars that won’t end, and as these wars rage on, President Trump is escalating tensions with North Korea and Iran.

Right now there’s a dangerous bill moving through the Senate that would give the President unchecked power for even more wars. The Corker-Kaine bill would give sweeping authorization for the President to go to war around the world with no Congressional oversight. It allows decisions about war to be made in secret. It also flips the power to declare war on its head and forces a supermajority veto to overrule the President.

We need to stop this! Join us in sending a message to the Senate Foreign Relations Committee that we need an AUMF that stops war, not one that rubberstamps Trump’s belligerent policies.

The AUMF signed by Congress in 2001 against those who planned, aided, and executed the 9/11 attacks has been warped and stretched through three presidencies. Congress needs to repeal the 2001 and 2002 AUMFs that have allowed 17 years of war with no end in sight but the replacement bill should be designed to end wars, not give them a Congressional stamp of approval.

Congress has repeatedly abdicated its responsibility for never-ending war. Instead, it feeds more money into the war machine and turns a blind eye to the impacts of war on our country and the world. Last year, when four servicemen were killed, Senator Lindsey Graham said he didn’t know we had forces in Niger. Shortly thereafter both Senator Graham and Senator Schumer could not even approximate how many U.S. troops are deployed. This is the result of unchecked Executive power and a Congress that refuses to do its job.

We cannot allow the abuse of power that is happening now to be expanded. Help us tell the Senate Foreign Relations Committee to say no to the Corker-Kaine AUMF that gives a blank check for Trump to wage war.

After 17 years of war, we’re watching the children of soldiers march off to the same war their parents fought. Will those soldiers also watch their grandchildren fight the same war?