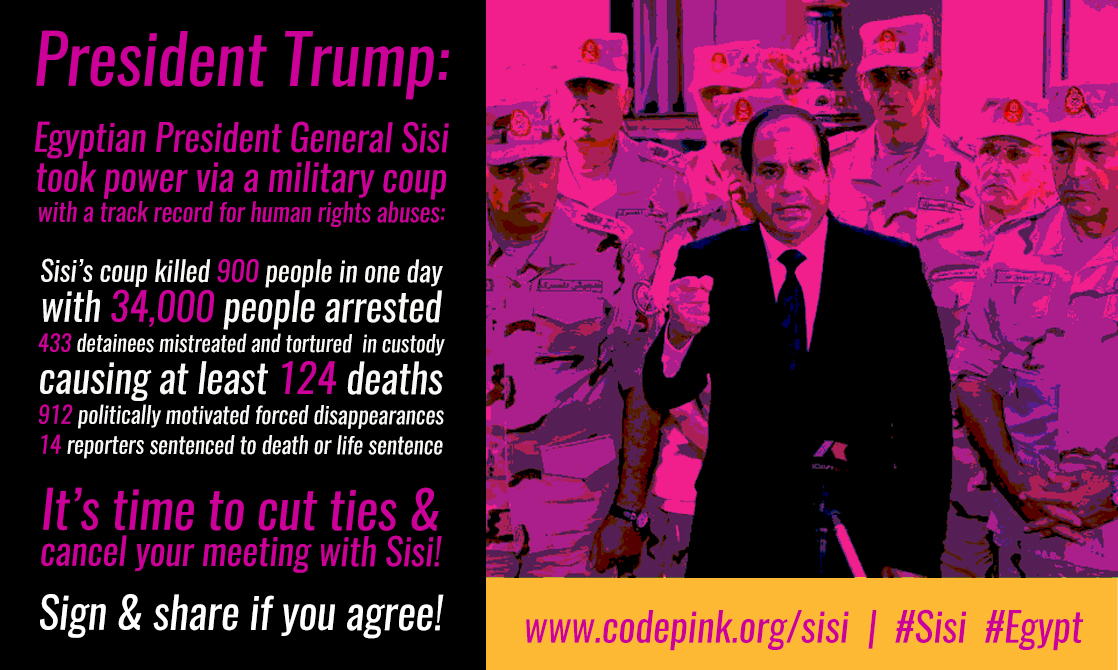 U.S. President Donald Trump plans to meet with Egyptian President General Sisi in the coming month. Join us in calling on Trump to cancel the meeting.

According to the Human Rights Watch, at least 34,000 people have been arrested and detained since General Sisi came to power in Egypt in 2013. The Egyptian Commission for Rights and Freedoms additionally reported that 912 people were victims of politically motivated forced disappearances from August 2015- August 2016. And throughout 2016, 433 detainees — including eight children — reported mistreatment and torture while in custody.

But apparently, these human rights abuses do not dishearten the new U.S. President, as Trump has previously complimented the Egyptian dictator by stating that he has "done a very good job" and that "he' a fantastic guy, he took control of Egypt". Trump is either missing the irony that Sisi literally took control of Egypt via military coup — or simply finds this action praiseworthy.

Trump has also lauded Sisi for reducing Egypt's terrorist problem. In truth, however, Sisi's brutal tactics that include extrajudicial killings, torture, and other abuses of human rights has caused the youth to become more easily swayed by local and international terrorist groups.

In addition, Sisi's policies are contributing to the larger refugee problem, as many Egyptians are trying to escape the politically based violence. This phenomenon is a straightforward example of the double standard that occurs within the political rhetoric of the United States. Despite his efforts to stem immigration from Middle Eastern countries, Trump is directly supporting a tyrant who is contributing to the refugee crisis.

Under the Obama administration, the United States gave $1.3 billion a year to General Sisi's regime. It appears that President Trump wants to strengthen the relations even further.

We say that it's time to cut ties with Sisi's abusive government and call on President Trump to cancel the proposed meeting: Sign our petition here!