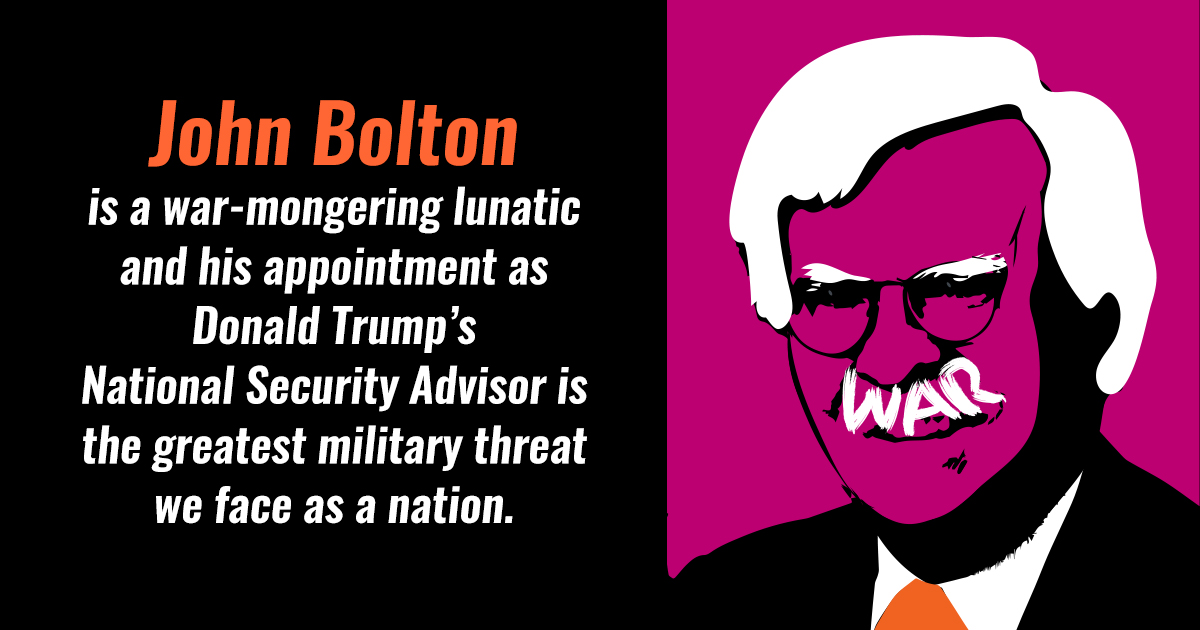 Let’s not mince words: John Bolton is a war-mongering lunatic and his appointment to be Donald Trump’s National Security Advisor is the greatest military threat we face as a nation.

John Bolton still thinks the Iraq war was a good idea. He attacks the UN and advocates for war with North Korea and Iran. He has even written such articles as “The Legal Case for Striking North Korea First” and “To Stop Iran’s Bomb, Bomb Iran.”

Bolton’s appointment doesn’t require Senate confirmation, so there is nothing we can do to prevent him from starting the job on April 9. But we can stop the other Iran Deal hater, Mike Pompeo, who Trump has nominated for Secretary of State. Help us counter John Bolton by telling your senators not to confirm Mike Pompeo. Tell them that a vote for Pompeo is a vote for Bolton and a vote for war.

Trump is trying to bring in a trifecta of war hawks. In addition to Bolton and Pompeo, he has appointed torture supporter Gina Haspel to head the CIA. Haspel will require confirmation. After Pompeo’s hearing, we will focus on opposing Haspel’s appointment as well.

The appointments of Bolton, Pompeo and Haspel come just before Trump’s meeting with North Korean President Kim Jong-Un in May and the May 12 certification of the Iran nuclear deal. A US pullout from the nuclear deal would trigger a major international crisis, as would a military attack on North Korea.

A vote for Pompeo is a vote for Bolton and a vote for war. Tell the Senate Foreign Relations Committee not to confirm Mike Pompeo.

Bolton doesn’t hide his war agenda. So we’re going to have to escalate our peaceful protests. From opposing Pompeo’s confirmation to actions on the streets, we need your help in building a movement to stop these dangerous men. Let’s protect the world from another US war. Don't forget to share this message on Facebook and Twitter!