Stop the bombs in Yemen 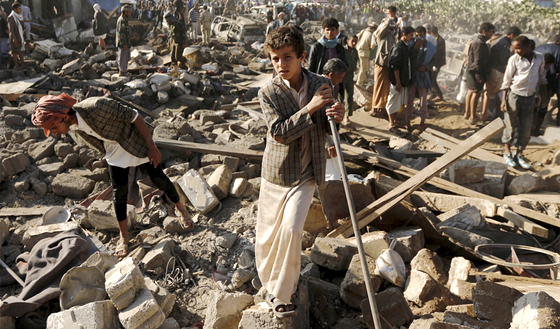 As a Yemeni, I’m horrified by the violence, the death, the destruction from the civil war and Saudi intervention. The media is reporting a ceasefire in Yemen, but Saudi bombs are still raining down, people are dying every day, and the social fabric of our nation is disintegrating.

Please take a moment to sign CODEPINK’s petition for an immediate and permanent ceasefire in Yemen and to ensure access to essential food, fuel and medical supplies by re-opening air and sea routes.

Before the current conflict, Yemen was already one of the poorest countries in the Middle East. Over 10 million people were going hungry, including one million acutely malnourished children. This number has increased by nearly two million since the conflict began. Violence has damaged homes, schools and even hospitals. Over 1,400 people have lost their lives and over 300,000 people have been displaced.

Food and diesel, which is needed to pump clean water, are increasingly in short supply and their prices are rising – putting these basic necessities out of reach for ordinary families. This is disastrous, because Yemen relies on imports for 90 percent of its food.

The US bears responsibility because most of the armaments being used by the Saudis against the Yemenis come from the US.

Join us in calling for a ceasefire and ensuring access to food, fuel and medical supplies by signing and sharing our petition. The Yemeni people need your solidarity.

Thanks for all you do to bring about a more peaceful world,

PS: If you haven’t already, take a picture with a #KefayaWar sign (meaning ‘enough war’) and share it with your friends and family on social media to raise awareness about this crisis and stand in solidarity with the people in Yemen who are still in danger.