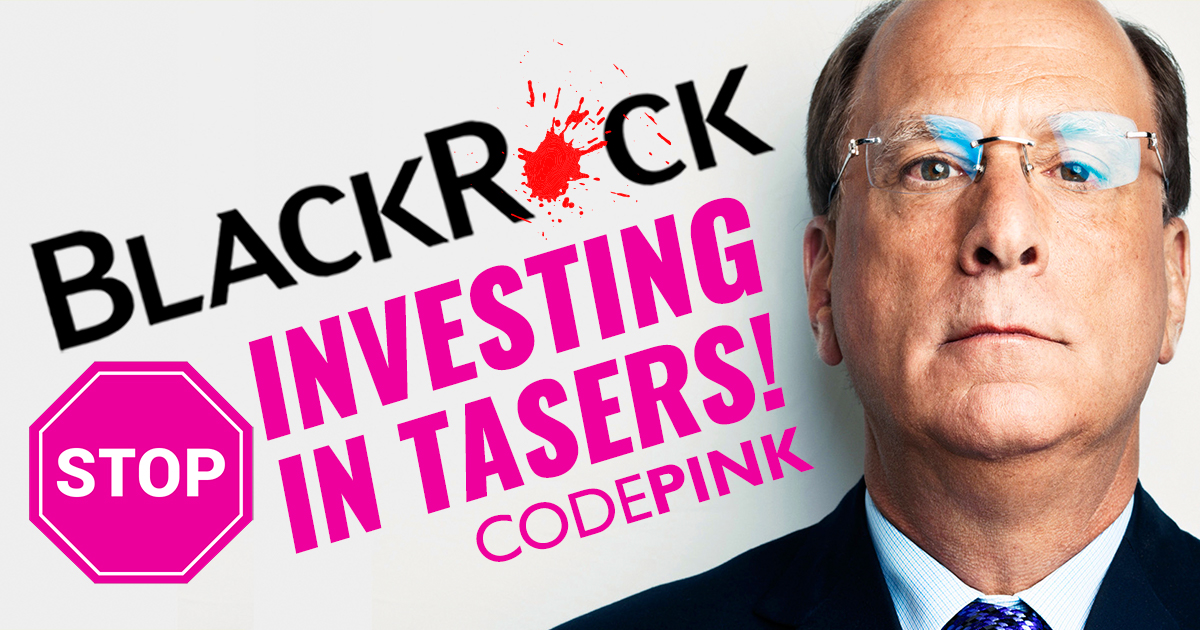 BlackRock loves to make a killing on killing: Over a thousand Americans have been killed by Tasers — 32 percent of them are Black Americans. Tasers are made by the colossal law enforcement supplier Axon Enterprise, based in Arizona.

One of their top shareholders happens to be Blackrock. Recently Blackrock has been trying to be sympathetic to the atrocities of murders waged on Black Americans and communities of color. If we ramp up massive pressure and blow the whistle on their deadly stocks, we can highlight that divesting from Tasers and the war in our streets will be a step in the right direction in building a fair and just society.

This issue is important to having peace in our streets. But this will only work if people participate. Send an email to Blackrock to divest from the Taser manufacturer Axon Enterprise which is responsible for the killing of thousands of Americans, and CODEPINK will pull out all the stops to make sure Blackrock execs hear our call:

Blackrock could do this. They recently announced that they were divesting from fossil fuels — signaling a shift in their policies. If CEO Larry Fink cares about “diversity, fairness, and justice” and building a “stronger, more equal, and safer society” — he should divest from Tasers.

Plus, compared to Blackrock’s other holdings, Taser stocks aren’t even that significant!

But if Blackrock does this, it could be the first domino we need to get other investment companies on board too. Send an email to BlackRock and share this widely!

If there’s one thing our community stands for, it’s peace and social justice. And one way we can help achieve that is by cutting off the flow of cash into the manufacturing of Tasers. So, let’s come together to make that happen, and help prevent more innocent Americans from being killed with these senseless tools.